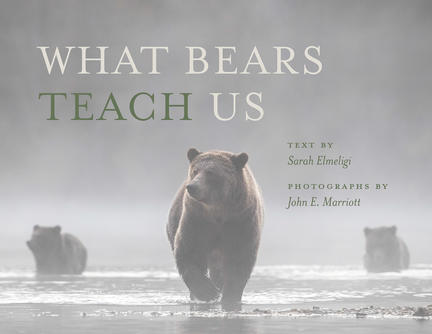 A lavishly illustrated book that explores the complex behavioural characteristics of North America’s largest land carnivores by examining the bear–human relationship from the bear’s perspective.

From the first moment Sarah Elmeligi came eye to eye with a grizzly bear, her life changed. In a moment that lasted mere seconds, she began to question everything she thought she knew about bears. How could this docile creature be the same one with a fearsome reputation for vicious attacks? Through years of research, Elmeligi grew to appreciate that bears are so much more than data points, stunning photos, and sensational online stories. Elmeligi expertly weaves the science of bear behaviour with her passionate account of personal encounters. Dive into the life of a bear biologist as Sarah’s colleagues recount their own “stories from the field” – intimate moments with bears where they were connected to an animal with personality, decision-making capabilities, and a host of engaging behaviours.

Join Elmeligi and Marriott on a journey that examines and shares the behaviour of black, grizzly, and polar bears in North America in a way you’ve never seen before. What Bears Teach Us will surprise you, inspire you, foster your curiosity, and teach you something new about bears and maybe even yourself.

Sarah Elmeligi has been working with bears for nearly 20 years. After completing her Masters research examining the impacts of bear-viewing tourism on bear behaviour in the K’tzim-a-deen Grizzly Bear Sanctuary on the northern tip of the Great Bear Rainforest in British Columbia, she completed her PhD studying grizzly bear habitat use of hiking trails in the Canadian Rocky Mountain national parks. Sarah is truly an interdisciplinary researcher and values incorporating the human dimension in her understanding of the bear–human relationship. Her research has been published in books, magazines, and scientific journals and presented at conferences around the world. Away from research, Sarah has worked tirelessly to increase protection of bear habitats and move communities towards successfully coexisting with bears. She has represented bears and their conservation as a scientist, environmentalist, and government land use planner. She currently lives in Canmore, Alberta, with her husband and daughters. For more information about Sarah’s work, please visit www.saraheconsulting.com.

John E. Marriott is one of Canada’s premier professional wildlife and nature photographers, with a career spanning two decades and images published worldwide in National Geographic, BBC Wildlife, Canadian Geographic, Maclean’s, and Reader’s Digest. He is also the wildlife photography columnist for Outdoor Photography Canada magazine. His books with RMB include The Pipestone Wolves: The Rise and Fall of a Wolf Family (with Günther Bloch), What Bears Teach Us (with Sarah Elmeligi), and The Kootenay Wolves: Five Years Following a Wild Wolf Pack. John has also produced four coffee-table books, including: Banff & Lake Louise: Images of Banff National Park, Wildlife of the Canadian Rockies: A Glimpse at Life on the Wild Side, The Canadian Rockies: Banff, Jasper & Beyond, and Tall Tales, Long Lenses: My Adventures in Photography. John prides himself on being a conservation photographer known for capturing wilderness scenes and wild, free-roaming animals in their natural habitats. John currently lives in Canmore, Alberta, with his wife, Jennifer.

Other titles by John E. Marriott

The Rise and Fall of a Wolf Family