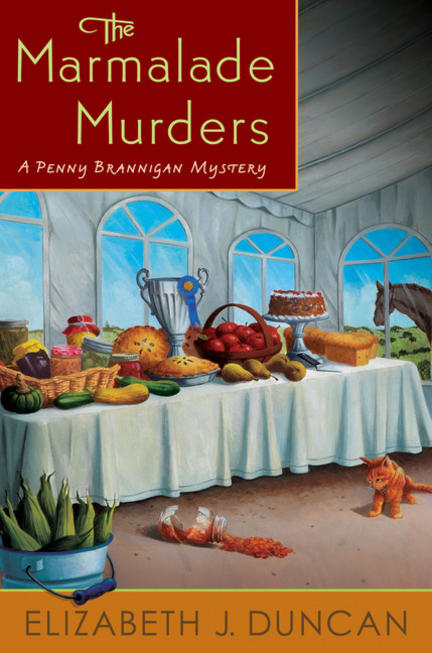 The competition is friendly and just a little fierce at the annual Llanelen agricultural show as town and country folk gather for the outdoor judging of farm animals and indoor judging of cakes, pies, pastries, chutneys, jams and jellies, along with vegetables, fruit and flowers. But this year, there’s a new show category: murder.

Local artist, Spa owner, and amateur sleuth Penny Brannigan agrees to help with the intake of the domestic arts entries and to judge the children’s pet competition on show day. When the president of the Welsh Women's Guild isn’t on hand to see her granddaughter and pet pug win a prize, the family becomes concerned. When a carrot cake entered in the competition goes missing, something is clearly amiss.

A black Labrador Retriever belonging to the agricultural show’s president discovers the body of the missing woman under the baked goods table. A newcomer to town, a transgender woman, is suspected, but amateur sleuth Penny Brannigan believes her to be innocent. She sets out to find the real killer, but when a second body is discovered days later, the case is thrown into confusion, and Penny knows it’s up to her to figure out what happened—and why.

Praise for The Marmalade Murders:

"[an] inviting picture of life in rural Wales."—Publishers Weekly

“Fans of small-town cozies will find a lot to like.” —Publishers Weekly onMurder on the Hour

“The lush landscape of Wales is lovingly described along with details of art, artists, and antiques in this mystery populated with quirky characters set in a charming village. Share with readers who enjoy Jane K. Cleland’s Josie Prescott cozies with their similar antiques frame.” —BooklistonMurder on the Hour

“Clever and chilling.” —Richmond-Times DispatchonNever Laugh as a Hearse Goes By

“The charming, unusual setting and quirky cast of characters make Duncan’s sixth book in the series an entertaining read that’s only enhanced by the many tutorials on slate mining and Welsh history.” —Library Journal onSlated for Death

“Spring isn’t itself without a really good British cozy and Duncan, who lives in Toronto, serves up a perfect teafest in her terrific Penny Brannigan series, set in Wales... With lots of action and local colour, Duncan’s book is a perfect spring getaway.” —The Globe and Mail onSlated for Death

If You're Going to Read Just ONE Book This Summer....You Will Be Making a Terrible Mistake

18 perfect reads for wherever you're getting your summer on.