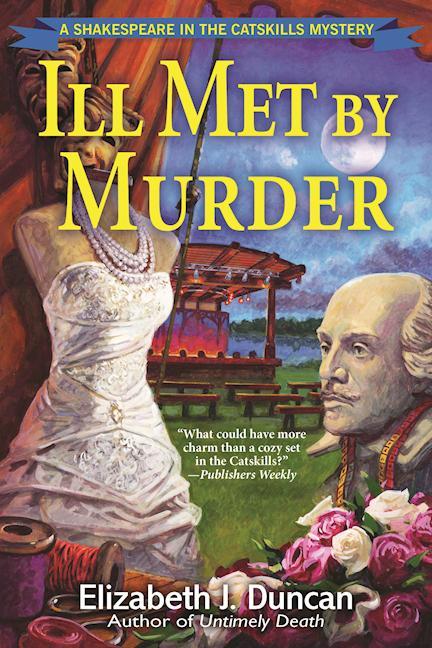 When Charlotte Fairfax, costume designer for the Catskill Shakespeare Theater Company, discovers a body murdered the night before their wealthy benefactor's daughter's wedding, she decides she must investigate in Ill Met by Murder, the second in Elizabeth J. Duncan's charming and acclaimed mystery series.

"Duncan fans are sure to enjoy this cozy."
--Publishers Weekly

"Duncan's second Catskills mystery is a delightful cozy with plenty of interesting characters and a touch of midlife romance."
--Kirkus Reviews

“Creative, delightful…This new tale is just as good as the previous one, and proves that these Shakespeare mysteries are going to be a whole lot of fun to follow.”
—Suspense Magazine

“Duncan brings interesting characters to the mystery stage while including plenty of theatrical details to charm the stage-oriented cozy readers.Ill Met by Murder is a great gift to find under the tree this Christmas.”
--Noir Journal

SHORTLISTED FOR THE 2016 BONY BLITHE AWARD

"What could have more charm than a cozy set in the Catskills?... Duncan drops just enough clues and red herrings to keep the reader guessing whodunit to the end."
--Publishers Weekly

"Duncan introduces a charming new sleuth and plenty of quirky characters sure to appeal to her base and to cozy fans in general."
--Kirkus Reviews

"Sympathetic, well-drawn characters and fascinating details on Shakespeare's plays and costume design add to what is a satisfying mystery."
--Booklist

"An impressively crafted mystery that is a fully absorbing and inherently fascinating read from beginning to end...very highly recommended."
--Midwest Book Review

"Sure to appeal to fans of M.C. Beaton and Agatha Christie."
--Library Journal onA Brush with Death

"Right up there with the best."
--Kirkus Reviews onA Brush with Death

"A really good British cozy... With lots of action and local color, Duncan's book is a perfect spring getaway."
--The Globe and Mail onSlated for Death