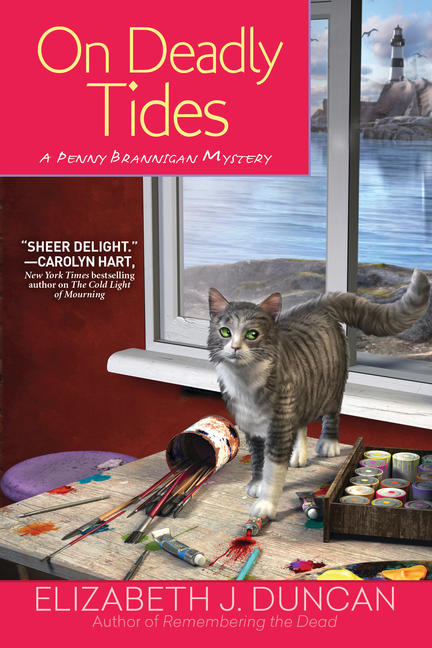 With a picturesque black and white lighthouse, pebble beaches and stunning views of sea and mountains, the island of Anglesey off the coast of North Wales is the perfect place for an idyllic mid-summer painting holiday.
And watercolour artist, businesswoman, and amateur sleuth Penny Brannigan is enjoying the retreat enormously - until she discovers the body of a New Zealand journalist on a secluded beach just as the tide is going out, threatening to take the body with it.
The post mortem reveals the victim died from injuries "consistent with a fall from a great height," and the death is ruled accidental. But Penny thinks there's more to the story. Curious how the victim came to such an untimely end at this most inhospitable spot, she uncovers a link to a mysterious disappearance several years earlier.
And as her holiday romance with a wildlife photographer turns to love, she learns some truths about herself, too, that surprise her.
As the winds of change blow through Penny's own life, she sets sail on a friendly tide for a future she never dreamed possible, in a beautiful place she never imagined

Praise for On Deadly Tides:
“Fans of this long-running series will delight in both the mystery and the romance that bids to change the heroine’s life.”
—Kirkus Reviews
"Duncan skillfully takes her classic village mystery series in a new direction."
—Publishers Weekly

Praise for Remembering the Dead:
"A soupçon of history and a whiff of lost romance combine for an unpredictable mystery."
—Kirkus Reviews

"For series fans and lovers of Welsh history and lore."
—Publishers Weekly

"This cozy contains numerous plot twists and is steeped in Welsh history, populated with full-bodied characters, and surrounded by lovingly described Welsh and Irish locales."
—Booklist

Praise for the Penny Brannigan Mysteries:
"Right up there with the best."
—Kirkus Reviews on A Brush with Death
“[An] inviting picture of life in rural Wales.”
―Publishers Weekly

“Duncan paints a lovely portrait and then ratchets up the suspense at all the right moments.”
—British Heritage Travel on Murder is for Keeps

“It’s easy to see why this is an award-winning series.
—Criminal Element

“She evokes the Welsh landscape and character with as much affection as any writer this side of Dylan Thomas.”
—Toronto Star

“Duncan holds the interest of her readers with snappy dialogue and a well-plotted build-up…..Duncan excels at bringing her characters to life. .”
—Mystery Scene Magazine

“Duncan is a born storyteller whose ability to create appealing characters, evoke a strong sense of place, and fashion a clever plot are accompanied by another gift: a faculty for writing flawlessly smooth prose.”
—Richmond Times-Dispatch

“[S]torytelling with polished exposition, pacing and edgy dialogue. Characters sparkle, and the dark side that lurks just at the edge of most innocent scenes is drawn with skill and depth. A must-read.”
—Hamilton Spectator on The Cold Light of Mourning

“Duncan has a fine eye for detail, plays fair with the clues, and creates engaging characters.”
—Globe and Mail