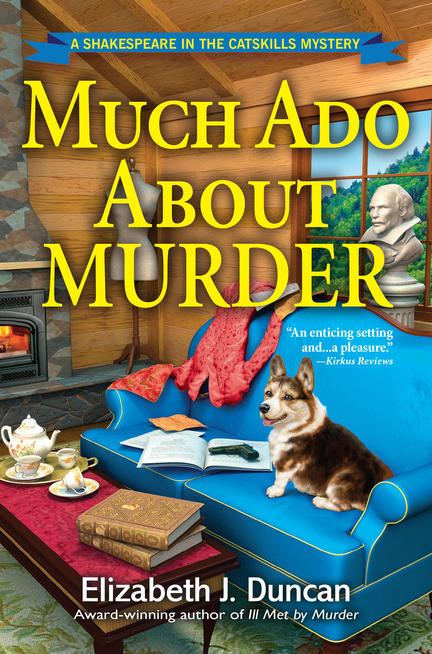 Costume designer Charlotte Fairfax has another murder on her hands as she prepares for the latest performance of the Catskills Shakespeare Theater Company,Much Ado About Nothing. The company’s steady growth enables them to cast star British actress Audrey Ashley, who arrives on scene to play the lead role of Beatrice. But things immediately get more complicated when Audrey insists the company replace the current director with new, up and coming British director Edmund Albright.

Edmund plans to change the popular romantic comedy, which alienates several people associated with the production. And the list of people he upsets only grows: the laid off former director, the hotel owner’s secretary, and even Audrey herself. Just as Edmund’s plans are about to come to fruition, his body is discovered on his sofa, holding a gun in his hand. His death is quickly ruled a suicide but Charlotte thinks otherwise. Why would Edmund, on the brink of greatness, kill himself? And in such an American way?

With a whole cast of characters to investigate, Charlotte is determined to unmask each one before it’s final curtain call on the whole production in award-winning author Elizabeth J. Duncan’s third Shakespeare in the Catskills mystery,Much Ado About Murder.

Praise forMuch Ado About Murder:
"An enticing setting and diverse characters make this latest return to the Catskills a pleasure."
—Kirkus Reviews

“[Much Ado About Murder] vividly captures the cutthroat world of the theater…[with a] likable sleuth.”
—Library Journal

“In this third in the series, Duncan brings her delightful characterizations, intelligent plotting, and always-interesting theatrical frame to the Catskills. It all adds up to another opening-night success.”
—Booklist
"Outstanding…a ‘must read’ for all dedicated mystery buffs and would be an enduringly popular addition to community library mystery/suspense collections."
—Midwest Book Review
Praise forIll Met by Murder:“Duncan fans are sure to enjoy this cozy.”—Publishers Weekly onIll Met by Murder
“Creative, delightful…These Shakespeare mysteries are going to be a whole lot of fun to follow.”
—Suspense Magazine
“A great gift to find under the tree this Christmas.”
—Noir Journal onIll Met by Murder