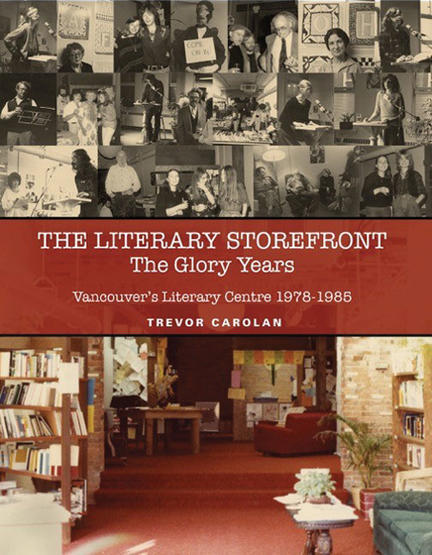 Founded by poet Mona Fertig and inspired by Shakespeare and Company in Paris, The Literary Storefront was Canada’s first non-profit literary centre and flourished in Vancouver’s colourful Gastown district from 1978-85. A pivotal time in west coast history when feminist, nationalist, and multicultural passions surged to redefine what a socially-committed literary community could be, The Storefront housed the regional offices of The Writers' Union of Canada, The League of Canadian Poets, an editing & printing company, and was the birthplace of the Federation of B.C. Writers. Carolan’s history recounts the inspiration, origins, achievements and tribulations of this seminal and legendary B.C. literary institution. Includes interviews with many important authors and survivors from among the Storefront Society's 500 members. 75 b & w photographs.

Trevor Carolan was born in Yorkshire. His family emigrated in l957 and he grew up in New Westminster, British Columbia. He has travelled extensively and lived in California, Alberta, and Britain. He began writing professionally at 17, filing dispatches from San Francisco’s Haight-Ashbury music scene. Widely published as journalist, literary critic, anthologist, poet, and translator specializing in East-West arts and letters, his work has appeared in five languages.

Dr. Carolan has worked as media advocate on behalf of international human rights, North Korean famine relief, Bosnian refugees, Canadian Aboriginal land claims, and Pacific Coast watershed issues. He served as literary coordinator for the XV Olympic Winter Games in Calgary; and has been Coordinator of writing programs at the Banff Arts Centre. He holds an interdisciplinary Ph.D. from Bond University, Queensland. For more than 20 years he has lived in North Vancouver where he served for three years as an elected municipal councillor and later wrote as political columnist for the North Shore News. He now teaches English at University of the Fraser Valley near Vancouver.

His current works are Another Kind of Paradise: Short Stories from the New Asia-Pacific (Cheng & Tsui), and Against the Shore: The Best of Pacific Rim Review of Books, which he co-edited with Richard Olafson. The Pillow Book of Dr. Jazz, an autobiographical novel, and Celtic Highway, a collection of poetry, are published by Ekstasis Editions. Giving up Poetry, a memoir of his acquaintance with the late poet Allen Ginsberg is published by Banff Centre Press. In 2003 he received a Spirituality & Health Best Books of the Year citation for his Return to Stillness: Twenty Years With a Tai Chi Master (Marlowe), an account of his lengthy studies with Master Ng Ching-Por in Vancouver’s Chinatown.

Other titles by Trevor Carolan

Journeys in the Unspoiled World

The Best of Pacfic Rim Review of Books Volume Two

Reading BC and Pacific Northwest Literature

The Best of the Pacific Rim Review of Books

The Pillow Book of Dr. Jazz

Down in the Valley

Iroquois in the West

Canadians love bookshops so much we even put them in our books. More than just meta—it makes for great reading too.