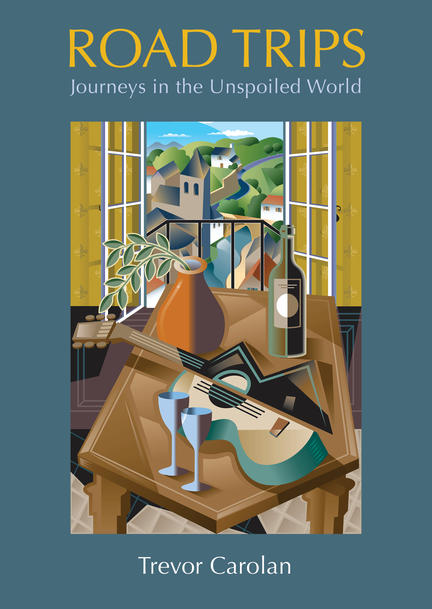 Trevor Carolan’s eagerness for encountering faraway peoples and places equals Paul Theroux’s excitement when he hits the road again in To the Ends of the Earth .

Veteran globe-trotter Trevor Carolan conjures 19 evocative road tales for armchair and seasoned travellers alike. A harvest of encounters with intriguing people, remarkable landscapes and cultures, his reportage sings with a love of food, art, literature, music and wine. Ranging from Bali to California, Cuba to Laos and Hawaii, wild British Columbia, new Poland and old Ireland, these meditations in search of an authentic life invite you to journey along to Morocco’s Sahara and to Buddhist temples in Mother India, meet Janis Joplin and B.B. King on the road, discover Lisbon’s beloved fado singers or drift on a slow boat down the Mekong. Whether it’s living the artist’s life in France and Madrid or dancing your prayers at a Burning Man-generational forest rave, this is travel writing for a world in need of joy and renewal.

Trevor Carolan was born in Yorkshire. His family emigrated in l957 and he grew up in New Westminster, British Columbia. He has travelled extensively and lived in California, Alberta, and Britain. He began writing professionally at 17, filing dispatches from San Francisco’s Haight-Ashbury music scene. Widely published as journalist, literary critic, anthologist, poet, and translator specializing in East-West arts and letters, his work has appeared in five languages.

Dr. Carolan has worked as media advocate on behalf of international human rights, North Korean famine relief, Bosnian refugees, Canadian Aboriginal land claims, and Pacific Coast watershed issues. He served as literary coordinator for the XV Olympic Winter Games in Calgary; and has been Coordinator of writing programs at the Banff Arts Centre. He holds an interdisciplinary Ph.D. from Bond University, Queensland. For more than 20 years he has lived in North Vancouver where he served for three years as an elected municipal councillor and later wrote as political columnist for the North Shore News. He now teaches English at University of the Fraser Valley near Vancouver.

His current works are Another Kind of Paradise: Short Stories from the New Asia-Pacific (Cheng & Tsui), and Against the Shore: The Best of Pacific Rim Review of Books, which he co-edited with Richard Olafson. The Pillow Book of Dr. Jazz, an autobiographical novel, and Celtic Highway, a collection of poetry, are published by Ekstasis Editions. Giving up Poetry, a memoir of his acquaintance with the late poet Allen Ginsberg is published by Banff Centre Press. In 2003 he received a Spirituality & Health Best Books of the Year citation for his Return to Stillness: Twenty Years With a Tai Chi Master (Marlowe), an account of his lengthy studies with Master Ng Ching-Por in Vancouver’s Chinatown.

“As an international backpacker and hiker, I revelled in Carolan’s tales of inspiring friends, culinary and musical encounters, diverse cultures and lands. But particularly meaningful are his profound questions and growing spiritual awareness inspired by thinkers and writers along the ‘dharma trail.’ A vital record and read for our times.” – Christina Johnson-Dean, author of The Life and Art of Ina D.D. Uhthoff

“Trevor Carolan travels lightly and insightfully, ever open to the ‘crazy music of what happens.’ Settle in for the ride, the sights and sounds, the sparkling riffs.” – Ronald Wright, author of Time Among the Maya

“Trevor Carolan has evolved into one of our most worldly and sophisticated writers while never losing touch with the common man.” – Alan Twigg, author of Dr Louise Aall: Sixty Years of Healing in Africa

Other titles by Trevor Carolan

The Best of Pacfic Rim Review of Books Volume Two

Reading BC and Pacific Northwest Literature

The Best of the Pacific Rim Review of Books

The Pillow Book of Dr. Jazz

Down in the Valley