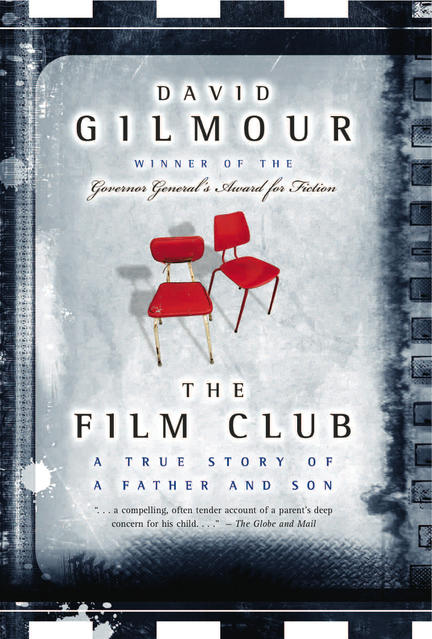 From the 2005 winner of the Governor-General’s Award for Fiction and the former national film critic for CBC television comes a delightful and absorbing book about the agonies and joys of home-schooling a beloved son. Written in the spare elegant style he is known for, The Film Club is the true story about David Gilmour’s decision to let his 15-year-old son drop out of high school on the condition that the boy agrees to watch three films a week with him. The book examines how those pivotal years changed both their lives.

From French New Wave, Kurosawa, and New German cinema, to De Palma, film noir, Cronenberg and Billy Wilder, among many others from world cinema, we read about key moments in each film, as the author teaches his son about life and the vagaries of growing up through the power of the movies. Replete with page-turning descriptions of scenes and actors and directors, the narrative is framed with the tender story of his son’s first bittersweet first loves.

This is a charming and poignant story about a very special time in a father and son’s relationship. David Gilmour is a novelist who has earned critical praise from literary figures as diverse as William Burroughs and Northrop Frye, and from publications as different as the New York Times to People magazine. The author of six novels, he also hosted the award-winning Gilmour on the Arts. He lives in Toronto with his wife Tina Gladstone.

The Film Club is an excellent choice for a book club, and it's as good as a David Gilmour novel. That's saying a lot.

Educators, film buffs and parents will find this book a rich and poignant read.

Canadian film critic, TV personality and novelist David Gilmour found himself unemployed in his 50s, with an alienated 17-year-old son who was flunking out of school. Gilmour's solution was to invent a radical variety of home schooling. Jesse could drop out and live with him rent-free, on one condition: They had to watch three movies a week, of Gilmour's choosing, and talk about them. No homework, no writing assignments. One of the products of this experiment is Gilmour's marvelous new book THE FILM CLUB, a funny, edgy and self-deprecating memoir that's unlike any parenting book you've ever read. (It has plenty of sharp little insights into movies too.) What happens to Jesse? That'd be cheating. Let's just say he goes into the world having seen ‘The 400 Blows,’ ‘A Fistful of Dollars’ and ‘Showgirls’ – that’s got to count for something. —Andrew O'Hehir, Salon.com

Reading [The Film Club] feels like an indulgence... a memoir about men and boys and what they really feel, how they really talk when alone with each other.

When David Gilmour's 15-year-old son, Jesse, starting failing the 10th grade, the Canadian film critic/ novelist let him drop out of school. Gilmour didn't home-school him, dispatch him to boarding school, or decide there was something terribly wrong with him. Instead, Gilmour — himself struggling professionally — required Jesse to watch three movies a week with him and to not use drugs. (His ex-wife approved.) This pleasant, wise memoir describes the films they watched, ranging from Akira Kurosawa's Ran to Basic Instinct, and the chats about life, love and booze they triggered. By the end, the son finds his way. And the father is glad they shared this time. — Deirdre Donahue, USA TODAY

The book is meaningful, is insightful, is valuable. On a social level alone, it challenges our notions of education, of productivity, of high schools that have fallen catastrophically behind in their capability to inspire young men. It is, what's more, a compelling, often tender account of a parent's deep concern for his child . . . He is, at his best, an assiduous and poetic phrase-maker, an excellent storyteller and a keen observer of physical and emotional nuance. Charles Wilkins, The Globe and Mail

July 6, the New York Times Book Review “Because it smacked of plot gimmick from one of the movies Gilmour used to review, I feared the book would be similarly cute and tidy. But it’s a heartfelt portrait of how hard it is to grow up, how hard it is to watch someone grow up and how in the midst of a family’s confusion and ire, there is sometimes nothing so welcome as a movie . . . Their discussions give you a quick and appealing sense of of the kind of people they are . . . [Gilmour] is modest about his own problems and doesn’t ask for pity. Like any good parent, he focuses on his son and he makes us care very much about what happens to him . . . My regards for Gilmour’s best writing, my sympathy for his struggles and my engagement in his story make my complaints seem small. If his style sometimes irked me, he has my admiration as a father for making his son, not himself, the very winning hero of this story. Not only did I find Jesse smart and funny, but more than once I was moved to tears by his batle tofind his place. At the end of the book, Gilmour, helpless with love for his son, watches him onstage performing, and recalls a line from ‘True Romance,’ a movie they’d both loved: ‘You’re so cool, you’re so cool, you’re so cool!’ Not only as a reader but as a father, too, I know how he feels.” —Douglas McGrath, New York Times Book Review

In this poignant and witty memoir, Canadian novelist Gilmour (A Perfect Night to Go to China) grapples with his decision to allow his teenage son, Jesse, to leave school in the 10th grade provided he promises to watch three movies a week with his father. Determined not to force a formal education on his son, former film critic and television host Gilmour begins the film club with Truffaut's The 400 Blows—with Basic Instinct for “dessert.” There are no lectures preceding the films, no quizzes on content or form: just a father and son watching movies together. Expertly tracing the trials and tribulations of teenage crushes and heartbreak, Gilmour explores not only his choice of films but also Jesse's struggles with his girlfriends and burgeoning music career. There are “units” on everything from undiscovered talent (Audrey Hepburn's Oscar-winning debut in Roman Holiday) to stillness, exemplified by Gary Cooper's ability in High Noon to steal a scene without moving a muscle. Gilmour expertly tackles the nostalgia not only of film but also that of parents, watching as their children grow and develop separate lives. With his unique blend of film history and personal memoir, Gilmour's latest offering will deservedly win him new American fans. (May)

I was soon hooked on the true story of a dedicated and loving father, at wits' end as to how to maintain a relationship with his son whose own life was on the edge of spinning out of control.

What makes the story so readable is its mix of sentiment and cynicism, its cockeyed wisdom... Writers don't always get better with age, but Gilmour's last two novels... are gems. With The Film Club, three's a charm.

Written with a minimum of flourish and little in the way of sentimentality, The Film Club explores the uneasy intimacies that develop between father and son, the lessons passed on from elder to younger and the surprising discoveries Gilmour is able to make about himself through his son's experiences... There are no tragedies of revelations here, just the tribulations of two men finding their way in the world. It's a surprisingly moving, thoughtful work.

The Film Club is an unexpected gift, especially for those who have had a son like Jesse or who have found solace through life in film-- or for anyone who simply wants to have their heart touched.

Newsday, June 15, 2008 “[A] smart, new memoir . . . Gilmour keeps THE FILM CLUB from lapsing into a Tuesdays With Morrie sugar-high through sharp writing and pointed insights about the films he screens and the people who made them.”

Boston Globe, June 8 Review By Ty Burr “The author, like many of us,” he writes, “is wise in the ways of pop culture yet clueless about the people in his own house. Rosemary’s Baby he can address with depth and ease; less so the adolescent boy ‘sitting head down on the other side of the kitchen table’ . . . The drama of THE FILM CLUB – and a sizable chunk of its comedy – is that of a father and son carving out mutual space between boomer complacency and teenage certainty . . . There’s pleasure in watching Gilmour, chatty and knowing, connect [movies] to the business at hand. For someone like me, who has daughters and has written of turning them on to the movies I love, reading THE FILM CLUB felt like visiting a foreign country where the signposts are the same but the destinations are unexpectedly different. For many dads, too, this book may be one of those mirrors that reflect more than they’d like.”

This book will move you; it must move you.

A Thing You'll Never Do

A Perfect Night to Go to China