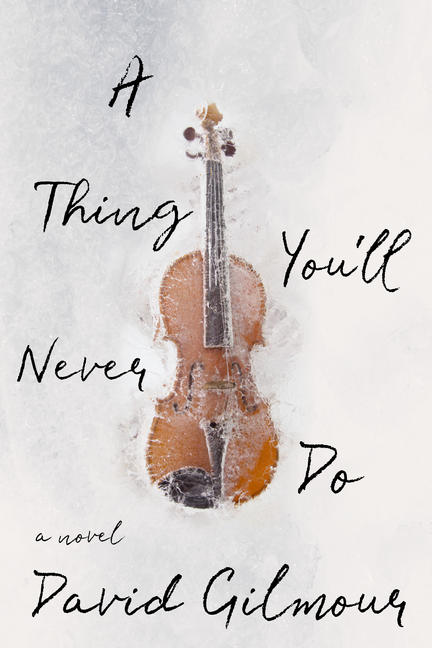 When his neighbor asks how he acquired a signed copy of Jimmy Carter’s memoir, Roman begins not with his father, the much-celebrated radio broadcaster to whom the book is inscribed, but with a young musician he met decades earlier, when he was a middle-aged and not quite-talented-enough professional violinist struggling to outgrow the sphere of his father’s influence. Yet despite his efforts to distance himself from his father’s professional legacy and personal habits, Roman’s pursuit of the beautiful violinist quickly turns into obsession and he must come to terms with the vulnerability and doubt the two men share. An elegant meditation on the complex relationships between fathers and sons and the things that come between them—love, age, loyalty, and individuation—A Thing You’ll Never Do is a moving examination of modern masculinity.

Excerpt: A Thing You'll Never Do (by (author) David Gilmour)

Excerpt from A Thing You'll Never Do

“We stayed at a small ‘historical’ hotel on the main street and that night played for the mayor and his family and guests in the living room of his high-ceilinged Victorian house on Charlotte Street. Across the way was a lovely, illuminated skating rink, right next to the bandstand. Like the music of Erik Satie or the smell of Pears soap, it was a town that made you nostalgic for something you never had. We played the usual stuff. Beethoven before dinner; Bach afterwards. We don’t take requests but we got a few anyway. To wit, the mayor’s daughter, a blond, curly-haired high school student, asked us for Stairway to Heaven which I thought we should learn because it kept coming up.

While we were playing, I looked out the window; it was still snowing; it had been snowing all day, big flakes whirling around in the park floodlights. I thought, this could be trouble.

Later, the four of us were having dinner in the kitchen—it was between sets. Pretty penguin girls were going in and out with trays when the mayor himself came in wearing a Scottish kilt. He was a red-faced noisy fellow (they’re always short) who prided himself on being a “character.” But he was friendly and I like friendly people.

“If this snow keeps up, you folks aren’t going anywhere,” he declared. He had an engineering degree from Stanford but like many ageing private school boys, he patched his speech with occasional rural intonations.

He offered to put us up for another night in the hotel until the roads were cleared. “We get the last of everything here,” he said, “including getting the roads shoveled.” He gave us four tickets to the local orchestra’s performance the following night. “They’re not in your league,” he said, “but they’re pretty damn good and they work at it.” He gave us a meaningful look, his mayor’s look, through two slightly blood-shot, protruding eyes. “Which is all you can ask from anyone, right?” A volley of laughter rocked his short body. We accepted the tickets but, really, can you imagine? The last thing I wanted to do on a day-off was to listen to an orchestra recital. As we were filing out of the kitchen, he gave us his gold embossed card. “If you’re ever in town, folks, just call me.” Pause. “Just don’t call me late for supper.” Ha-ha! ha! Supper.

Next morning when I looked out the second-floor window of the hotel, I could see the whole town was snowed in. Tree branches weighed down, cars buried; there must have been two feet of snow on the main street. Very quiet. The cellist’s car, a mound of white. So we stayed on.

Oddly enough, the library down the street was open and, after a generous breakfast (homemade whole-wheat bread and thick back bacon) in the Talk of the Town Café, I wandered in later that afternoon. I looked at the “We Suggest” table, novels by the usual Canadian nightmares, one of them signed by its cavern-voiced, peculiarly unattractive author; a musty edition of Montaigne’s essays (how did that get there?), and an oral history of the town. I chatted to the lady librarian, fiddled on the computer, looked up the names of a few old childhood tormentors who, I was happy to see, had done nothing special over the years; watched a YouTube video of Bruce Springsteen doing a cover of the Stones’ Last Time. Just knocked around in the snowbound library and had a nice time. Felt as though I was “living well,” that my blood was clean, which is a pleasant sensation but not one I can describe. The bell on the church across the street rang out the hour, the brass vibrations expanding and shrinking in the cold air. There was a clank in the old-fashioned radiators.

I wrote my girlfriend, Mary-Anne Deacon, an email. I always liked her best when I was out of town. Sometimes I even imagined I was in love with her. But when I saw her standing in the doorway of my apartment, after I’d looked forward to seeing her all day, something always sank in me. Something must have sunk in her, too. But I didn’t see it at the time. It was a period in my life when I got a lot of things wrong, especially what people thought of me. Looking back on it now, I think I was suffering from some kind of reverse paranoia, the assumption that people were going around thinking good things about me all the time. If you live long enough, you find out how a whole bunch of your own stories end and it’s usually not the way you thought they would. Not at all.

The day passed slowly as it always does when you’re away from home. I kept looking at my watch; it seemed to be running at half speed. I watched television in my room; I read a chapter of One Day in the Life of Ivan Denisovich. (My father gave it to me when I was having dinner at his apartment. He liked Russian writers. Especially when he was depressed. Whenever I saw War and Peace—his favorite—on the night table, I knew to stay an hour or two longer, that he’d like the company even if he was too shy to ask for it.)

Darkness fell shortly after five o’clock and with it came that slight relief that I always experience with the onset of darkness, a sense that the world is a more mysterious place; the street lights came on; kids in snowsuits pulled toboggans across the park. Somebody had built a snowman in the bandstand; carrot nose, black eyes. From the angle of its head, it appeared to be looking right at my window. A kind of rural take on the T.J. Eckelburg billboard.

I returned to the Talk of the Town for dinner, the “early bird special” with cranberry sauce. The snow lying even and sparkly on the outside window sill; teenage boys in toques and ear muffs: you could see little puffs of their breath when they talked. It reminded me of a place in the deep south that I hitchhiked through when I was fifteen, when I thought you could outrun a broken heart. For three days, I descended through the heat and gradually thickening air; got in and out of cars and trucks and eighteen-wheelers, slept here and there; somebody gave me twenty dollars; somebody took me up a deserted country road when I was asleep and put his hand on me. It was a long walk back to the highway. But it was oddly sweet; birds chirping, cicadas in the high grass, the hot sun pouring down, a dog trotting along beside me and then disappearing into the trees. Hard to believe that the world could contain all this in the same hour.

A day later? Maybe two? I can’t remember the name of the town, it was just a cluster of white cottages by the sea, the waves gently patting the sand, clouds from a child’s coloring book overhead. But I was very young and I hadn’t learnt yet to stay put when you’re happy. So I moved on and when I got to the next beautiful place…etcetera, etcetera, etcetera.

They were glad to see me back at The Talk of the Town. The librarian was there with her husband, who was missing an arm. They asked me if I wanted to join them, I said thank you but I had some work to do. I put my book on the table, face down, and pulled my pen from my pocket and laid it ostentatiously on top of the book, all as if I were just about to start something important. The truth is, then as now, I preferred eating in the company of my own thoughts, alone. They may be prosaic, these pensées, but they didn’t bruise me as people often do, albeit accidentally.

There’s a curious quality to loneliness: you hurry back to it. You end up sort of protecting it.

I sat by the front window; people passed by on the sidewalk. They smiled at me or nodded. It was like sitting in a painting. A man shoveled his driveway soundlessly. A snow plough paused at a red light. By eight o’clock, the streets around the park were mostly cleared, but Errol, the cellist in our group, had got drunk that afternoon with a couple of the locals, and didn’t want to leave. Ever. Said he wanted to move there. You could see his point. Christmas lights in all the trees, teenage girls with white skates over their shoulders going somewhere pleasant. Everybody asking how you are.”

“Emotionally raw but acidly cerebral…for a novel that sends up so many artistic types with searing, laugh-out-loud caricatures, the work is passionate in its championing of art itself” —Quill & Quire

“A lively and rapidly picaresque journey across time…generous” —Toronto Star

“Gilmour’s seemingly effortless facility at turning a sentence, his searing honesty and self-awareness (however harsh the narrator can be in his assessments of others, he saves all the nastiest barbs for himself), and his incisive eye for cultural worth [is undeniable]…a testament to a well-lived life, and the understanding that comes with a certain age.” —Steven W. Beattie, That Shakespearean Rag

A Perfect Night to Go to China

A True Story of a Father and a Son