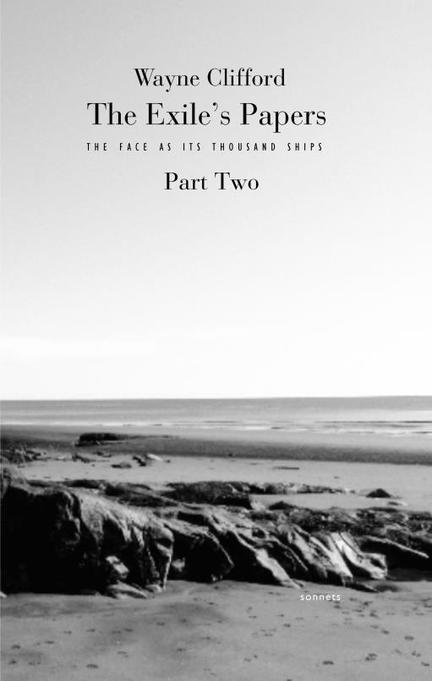 The second work in a series of four that will eventually include 800 sonnets. The Face as its Thousand Ships continues where The Duplicity of Autobiography left off. Clifford maintains a deft ability to work the sonnet form. An exceptional work that functions as both an important cog in a series, and as a stand-alone work of art.

Poetic form is always engaged in a delicate dance with expectation, as the poet seeks an adequate balance between rightness and surprise. Sticking too closely to time-worn steps will find the practiced reader asking, 'If “breath' is here, can “death' be far behind?' A version of this question lies at the heart of The Face As Its Thousand Ships, Part II of The Exile's Papers, the projected four-volume sonnet series that has occupied Canadian poet Wayne Clifford for several decades. Written from the standpoint of late middle age -- of 'breath'shadowed by 'death' -- these poems explore freedom within the constraints of inevitability. Contrary to the expectations raised by an extensive treatment of a single genre by a poet in his 60s, Clifford's book shows little concern for conventional 'mastery' -- though certain of its poems could easily claim this adjective. Instead, outrageous wordplay, variable rhyme and stanzapatterns, and wild tonal shifts act out a continual metamorphosis, eluding the finality that the term 'mastery' implies. The sonnet form seems primarily chosen to elicit this drama of temporizing.

The result is a book that can be tedious and exhausting, but which continually impresses with its multilayered wit. Openly indebted to the 17th-century metaphysical poets, Clifford's work also recalls their 20th-century heir William Empson, both in linguistic density and in its undercurrent of warmth. A representative (though far from exhaustive) range of possibilities appears when one poem begins in a mock formal register (befitting its title, 'Fate Will Realize The Three Sisters Whenever Possible'), then dips into broad doggerel, before concluding with a complex blend of deadpan and darker tonalities, when the poet's mother responds over the phone to her son's complaint about his mortality: 'Pity. We began in me. You owe / the life you value now. I'll hold. You cry.' If hardly a line in the book goes by without serious punning or troping, this shimmering surface depends on a somber background -- a conceit expressed in the recurringimage of a window blackened by night, prompting the poet's resonant quip, 'the dark's / whatfounds reflection.'

These and similar moments -- addressing such difficult subjects as the poet's first love, his daughters' departure from home, and his mother's death -- make The Face As Its Thousand Ships a striking, original collection, abounding in thought. Readers attuned to its distinctive music will not want to miss this series' next installment.

'Clifford's sonnets span a large trajectory in their play of ideas and relationships -- postmodernism and pirates, origins of the self and of the species (mythical and scientific), parents and children, legacies of words and deeds, dogs and goddesses, love bombs and poets. Most often, Clifford blends language, line and form into a harmony of meaning, but sometimes he makes use of more difficult syntax. ''Proper'' speech is abandoned for a skipping, tripping arrangement, almost like scat singing. He plays with sounds, exchanging verbs and dancing around grammatical arrangements like a big band conductor. This draws attention to the constrictive nature of the sonnet, blasting out of it grammatically.'

'Here is love is purified, his worries sublime, his advice what he would call his ''tenderest must''.... The message is simple: what we wish for is more complicated than just the wishing, and that when we get our wish, we are often left dissatisfied. But what a beauty of expression, the idea that wishes, the stuff of the thinking of childhood, are what we in fact are wishing for all along, that the wishes realized will have their cons. Wishes come true on their own time, no matter how passionate the wanting, and indeed that passion comprises wishes themselves. It's a poem, mind, and it accomplishes its music and sense concordantly. But reading masterworks like this one, one realizes that there's something about the female child that unlocks the poet's expression of fatherhood. He's unrestrained.'