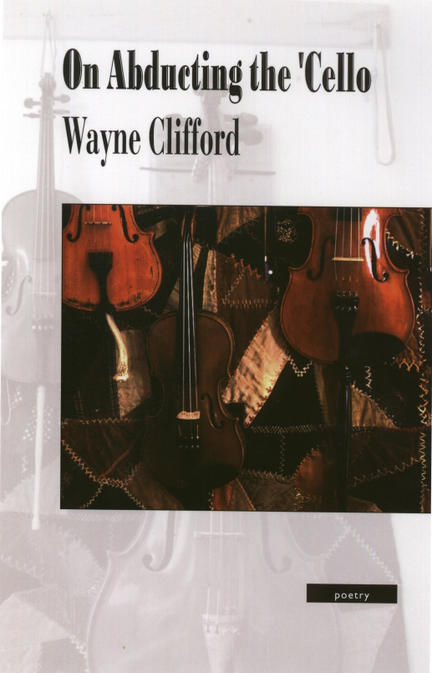 In 1965, Clifford published Man In A Window, his first collection of poems. This, in itself, was not particularly remarkable, but literary history was being made nonetheless. Clifford was the first acquisitions editor at Coach House Press, and Man In A Window was Coach House's first trade publication -- released in an edition of 300, illustrated with silkscreened nudes.

This is how such things were done ... in the alley behind Huron Street ... in the shadow of Rochdale College ... for just the one brief shining moment ... at a time in the very late sixties.

On Abducting the 'Cello is Clifford's first trade publication since 1979. It is an important book, and an unlikely publication. Clifford is arguably the Missing Link, the one Thread in the continuum of Canadian Verse that connects the radical formalism of bpNichol and Company (I'm thinking here of McCaffery, Dutton, and the Four Horsemen) with the traditional forms practised by many of PQL's current roster (I'm thinking here of P.K. Page who, doubtless, would insist on her righteous place in hipsterdom -- but in the Forties, presumably, rather than the Sixties).

Outrageous images, snippets of gossip and chat, a rare verbal dexterity and mastery of form all collide in Wayne Clifford's unusual and unexpected sequence of sonnets. One of the oldest of poetic forms, the sonnet is here re-invented and proves itself, in Clifford's hands, commodious enough for all types of speech, from high diction to gutter slang, all in impeccable rhyme and stanza. Informed throughout with a profound love of music in all its forms, On Abducting the 'Cello ranges from Kodaly to Stevie Wonder, Elmer Fudd to Jung, Emmaus to Treblinka. Written over a period of many years, revised and pondered, and pondered again, this is a startling and delightful collection of poems that succeeds in 'making it new' while wrestling with such perennial conundrums as 'love's delirious solipsism' in language at once antic and grave, melodious and irrepressibly zany.

'Clifford's 53 poems -- sonnets all -- offer playful, reflective, and mocking meditations on (among other themes) the value of artistic practice. The vehicle for all of this is the tale of a sustained love affair with a cello, one of the orchestra's more imposing and easily anthropomorphized instruments. ... Clifford handles the form with humorous familiarity, nimbly picking his way through the gamut of sonnet stanza forms, in rhythms both jazzy and iambic.'

'Balance between taut rhyme and meter and occasional variance, between language of musical theory and popular crudity, marks Clifford's collection. He uses traditional form and narrative framework to raise questions about ideas of Wagner's impact on German nationalism, the doubling and splitting of an ego, and Elmer Fudd's sentimental mirroring of everyday romance. The delight and the challenge in On Abducting the 'Cello crystallize in the peripheral scope of the well-crafted, tightly tuned lines.'