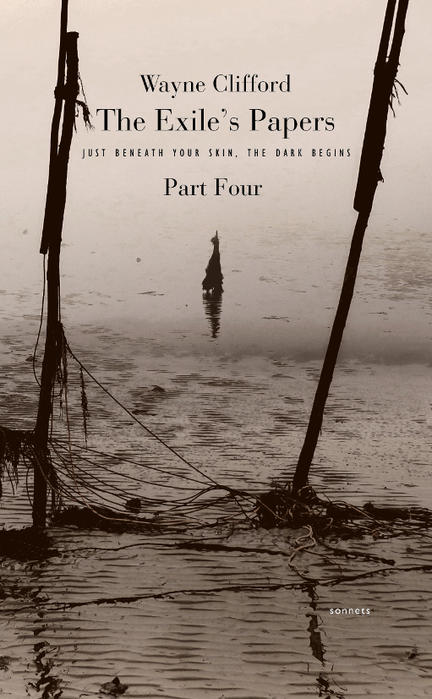 The Exile's Papers Part Four: Just Beneath Your Skin, the Dark Begins, is the final chapter of Wayne Clifford's sweeping sonnet sequence. In this volume, the exiled poet questions notions of truth, identity and salvation in his quest to describe and interpret a journey through life that is both familiar and unfamiliar.

Excerpt: The Exile's Papers: Part 4: Just Beneath Your Skin, the Dark Begins (by (author) Wayne Clifford)

We've established by proving, further and further back,
a past insulting our obvious gifts, our speech,
our social graces, intellects creating participles
that can sustain true notyetness. At points,
some among us mutter, "The fools've got language
all mixed up with meaning. Meanest wins!"
but curiosity reaches even into lies,
where ape, with paw caught in the jar's surprise
grasp, learns it's hard, inventing stories
when we know so much, that in frustration we dig
up graves and pick our dead out of accreting
matrix.

"See? See?" we taunt our doubter. "Own
what's Yours. Who'd You think You were fooling? Angels?
We're sometimes right!"

You fade into the next question.

The spruce here pillar up to close their height
against the sky. In their arcade I am,
the berry edge of open.

duel through dapple of two butterflies, flight
that spirals up beyond, before they scram
on wind the speed of breath,

a way that butterflies come up with jokes
they brag as though someone might give a damn.

Much like these lines that go where rhyme provokes.
The city. Country. Somewhere one has worth.
The only rhyme that makes some sense is death.
The only one that might convince the folks.

If fluttering the tensions makes a fight,
spruce-shade goddess, what's the good I write?