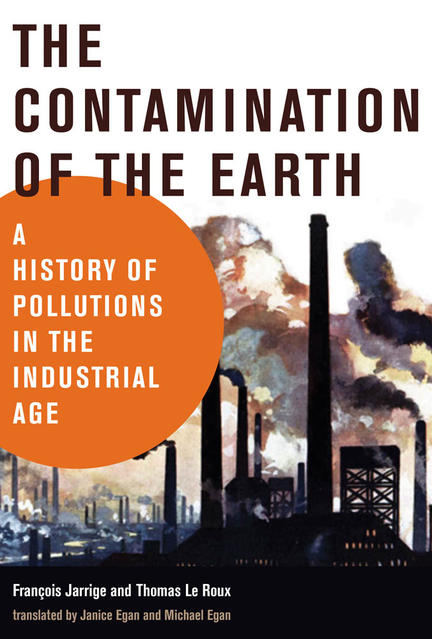 The trajectories of pollution in global capitalism, from the toxic waste of early tanneries to the poisonous effects of pesticides in the twentieth century.

Through the centuries, the march of economic progress has been accompanied by the spread of industrial pollution. As our capacities for production and our aptitude for consumption have increased, so have their byproducts—chemical contamination from fertilizers and pesticides, diesel emissions, oil spills, a vast “plastic continent” found floating in the ocean. The Contamination of the Earth offers a social and political history of industrial pollution, mapping its trajectories over three centuries, from the toxic wastes of early tanneries to the fossil fuel energy regime of the twentieth century.

The authors describe how, from 1750 onward, in contrast to the early modern period, polluted water and air came to be seen as inevitable side effects of industrialization, which was universally regarded as beneficial. By the nineteenth century, pollutants became constituent elements of modernity. The authors trace the evolution of these various pollutions, and describe the ways in which they were simultaneously denounced and permitted. The twentieth century saw new and massive scales of pollution: chemicals that resisted biodegradation, including napalm and other defoliants used as weapons of war; the ascendancy of oil; and a lifestyle defined by consumption. In the 1970s, pollution became a political issue, but efforts—local, national, and global—to regulate it often fell short. Viewing the history of pollution though a political lens, the authors also offer lessons for the future of the industrial world.

François Jarrige is Senior Lecturer in Contemporary History at the University of Burgundy's Georges Chevrier Centre.

Michael Egan is Associate Professor of History at McMaster University and Director of the Sustainable Future History Project.

Excerpt: The Contamination of the Earth: A History of Pollutions in the Industrial Age (by (author) Francois Jarrige & Thomas Le Roux; translated by Janice Egan & Michael Egan)

There are many ways to think about pollutions: as a benchmark of technological deficiencies requiring improvement, a fundamental byproduct of all productive activity, an essentially chemical issue requiring further understanding of the molecular makeup of the world; or, more profoundly, as a critical intersection at the crossroads of political, economic, social, and scientific issues, locally and globally. Pollutions insidiously impact everyday life. Their invisibility and dilution render them controversial and subject to denial, fueled by “merchants of doubt,” who interfere with and manipulate scientific data and public discourse. Pollutions are legion and various: widespread or accidental, preexisting or unforeseen, they are rarely adequately understood. Their place in modern history is amplified or underestimated by scandal, pressure groups, expert discussions, ecologists’ actions, and ambitious politicians and corporations. Their magnitude and complexity, much like their cause and effect, are difficult and controversial topics to encompass. That is undoubtedly why no single work has attempted to present a historic panorama of pollutions in order to provide a greater understanding of their workings. Such a study would need to discern what is at stake and follow the global spread of pollutions in time and space, and all the necessary preconditions for responding and reacting to them. Between paralyzing catastrophism and reassuring explanations, it is difficult to know how to consider pollutions, when each expert and specialist imposes her or his own vision of the subject.
Over the last few decades, environmental history has become a well-established subject, initially in the United States, then gradually on a global scale. As a field, it has helped give a new and heretofore overlooked perspective on pollutions. Histories of contamination have been central in the emergence and development of the field since its inception in the 1970s. By and large, these histories of industrial trespasses into the environment have constituted a “tragic” environmental history, effectively an accounting of the damage caused to natural environments by human activities. Subsequently, this history gave way to other approaches that focused more on exchanges and interactions between humans and nature, relegating pollutions to the background as subsidiary to larger systems of organization. In France, very few works have explored the history of pollutions—and those that have do not examine the dynamics of industrial pollution in any depth, at best considering it a partial aspect of greater environmental transformations. Over the last decade, however, many new monographs have markedly expanded the historical understanding of pollutions. They have permitted a more focused exploration of the subject’s depths, complexities, and chronologies—and topics requiring still further consideration. But this literature is generally not very accessible, and tends to concentrate on specific industries, regions, or countries, thus offering something of a scattered or incomplete overview. While this book relies heavily on these studies, it attempts a global synthesis by linking the traditions of social and economic history, the history of law and the state, and the histories of science and technology, with new directions in environmental history.
While it is evidently not possible to cover everything—an encyclopedia would be needed—this book endeavors to bring together often segmented approaches, illuminating key dynamics at work while pointing out new challenges and issues that need to be explored. By proposing a social and political history of pollutions since the beginning of the industrial age, the aim is to present a global, historic vision of what has polluted different environments—air, soil, and water—over a period of three centuries. Special attention is paid to relations of social power, which shaped successive pollution cycles, their appearance and disappearance. Too, it takes especial care to map the contours of cultural changes, such as various regulatory strategies designed to deal with pollutions.

"The Contamination of the Earth is not a balanced view of technological progress; that is not its purpose. It is a clear and relentless exposure of the forces that have converged to ravage our environment. And it should prompt scientists and citizens to ask: am I complicit in this system? Or will I try to stand against it?"
–Nature

"Scholarly rather than polemical and of interest to students of environmental and economic history."
– Kirkus Reviews

Other titles by Michael Egan

Barry Commoner and the Science of Survival

The Remaking of American Environmentalism