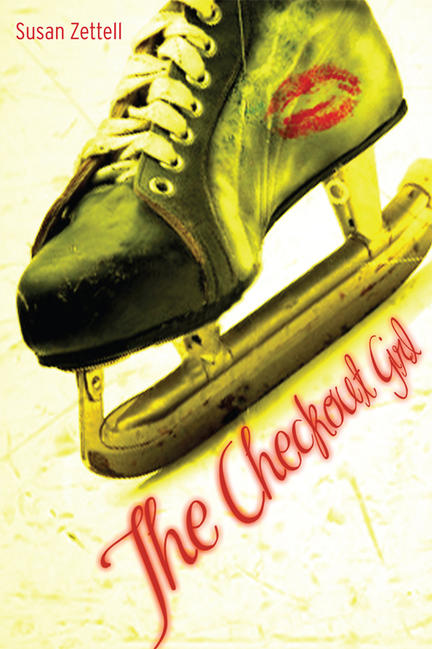 It's 1970, and the optimism of Trudeaumania is starting to give way to fears of wage and price controls. In Varnum, Ontario, where the smell of industry is the smell of money, a lot of that money's heading south, just like Bobby Orr.

The Checkout Girl is the story of Kathy Rausch, whose life these days is something that just seems to happen to her. After sneaking out on her boyfriend in Vancouver, Kathy moves back to Varnum and hides out in the basement of her high school buddy, Penny Lehman, in a room she shares with Penny's skittish boa constrictor, Freddie.

When Kathy isn't checking out groceries, she practices hockey drills. And when she isn't practicing, she's warding off advances from fellow basement dweller "Little" Barry Bender, ignoring her well-meaning mother, Connie, hanging out with her best friend, champion baton twirler Darlyn Smola, and dealing a bit of marijuana for Penny's husband Pete. But when Kathy stumbles upon a brutal murder she is finally driven to put her hockey stick where her heart is: on the ice.

"And while we're at it, while we're examining the life of Kathy Rausch, you're wasting time on that loser checkout job in a store that's on its last legs. You're smart, Kathy. All your teachers said you were smart. Go to college. Or at least get a job in a union shop.

"Look here," Connie says, and she shakes the newspaper, "the firemen are getting a 17% raise this year. Unionized job. And you remember Shirley Goetz from church? Promoted to line supervisor last week. Unionized job. That'll never happen in a grocery store. Women don't get to be managers in supermarkets. Even packers get promoted because they're boys, but womenénever!"

"I order the cigarettes," Kathy interrupts.

Then she stops speaking because if she says more she will only get in deeper trouble. Cigarette ordering is a prestige position in Kathy's store, but it's just a bone they threw her when she threatened to quit when all the guys got a raise and Kathy's pay packet was exactly the same as always. Unmarried checkout girls are on the bottom of the grocery store food chain. Even Kathy knows this. And though her mother is right about wages and promotions, Kathy will never admit it, at least not to her.

"Yoo-hoo! Kathy-Kathy-Kathy! I'm talking to you. Do they pay you more for ordering cigarettes?" Connie calls.

Kathy very carefully and very slowly wraps the cord around the handle of the iron. She doesn't say anything because there's nothing to say.

"Do something with your life," Connie almost hisses. "You're going to be twenty soon."

Kathy leans on the door jamb. Holding the iron in one hand like a shield, she runs the fingers of her other hand up and down the thin strip of blond moulding along the edge of the walnut panelling her father installed in the dining area two weeks before he'd died in the car crash. Kathy had handed him nails and fetched cold beer. Her father told her she was a good carpenter's helper and she should consider becoming an apprentice when she grew up. Something to fall back on, he had said and winked, when she got too old to play hockey.

She sets the iron on the chrome dining table and turns into the kitchen, puts on a pair of oven mitts that are crusty with food stains and dotted with burn holes. The oven door squeals and a thick spicy steam rolls up out of the roasting pan when Kathy lifts the lid. Pot roast is one of her favourite winter meals and her mother is cooking it for her tonight as a special treat.

"You could at least move out of that house you're boarding in. Everyone knows it's a dope dealer's house," Connie yells from the living room.

"Go to hell," Kathy mouths as she bastes the meat and vegetables with the oniony gravy. "I can't hear you," she says out loud. She clatters the lid around to make noise, then sets it back on the pan and closes the oven door.

"There's been another hijacking," Connie shouts.

"What?" Kathy asks, as she walks back into the living room.

"Did you check that roast?" Connie says.

Kathy sits on the arm of her mother's chair.

"I said there's been another hijacking. Some Brazilians trying to get to Cuba. Here," Connie says, reaching under her chair for the box with the clipped out article. She hands the clipping to Kathy. "Add this to my scrapbook, honey."

"Sure," Kathy says and slides off the chair.

Not that Connie doesn't believe in war. Maybe because she'd lived through World War II, she says once she's on the topic. But she feels what Canada needs is a strong military that knows its arse from a hole in the ground (her words) and has leaders who have vision. And when she's really rolling she also tells Kathy, and anyone who's listening, that she believes there should be some kind of national service. Not like the US draft. That's just a way to kill off Negroes and the poor. Who are mostly Negroes, she adds.

No, she says, more like the community work the Company of Young Canadians does. Or the Mennonite Central Committee or some other church or volunteer group that does relief work. Give young people -- all young people, no exceptions -- a sense of civic duty, which seems to be sorely lacking since the last war. Kids have it too good, Connie likes to rant. They take too much for granted. They need something to help them get their lives in order, to figure out what really matters to them. "In my humble opinion, at least," she always adds.

Nine times out of ten this lecture is directed at Kathy. Especially the getting-lives-in-order part.

Kathy's unsure where she stands on the Vietnam War and the US draft, but she has been in bars and coffee houses and sat with boys running away from both the war and the draft, mostly working-class kids like herself who see no way out of going to Vietnam but to go into exile, who complain that university kids get exemptions and the rich boys' parents can afford to buy their way out of service.

Unlike Connie, who has the entire world and everything and everyone in it figured out, and knows the best way to do everything, Kathy can't figure out her own life, much less come up with ways that other people should be living. Still, she listens to Connie, tries to take in what she says, as long as she's not commenting too directly on her life. Then Kathy shuts her out, and every word Connie says is splintered almost to nothingness, into dust particles that drift away on the air.

If Kathy hears anything, it's the raw need in Connie's voice. (Connie calls this love -- I wouldn't say this if I didn't love you, is her line.) Connie wants Kathy to be normal: have a reasonably good job with decent wages, preferably a union job with benefits and some security; have a stable relationship; live in a decent apartment; act like a responsible citizen.

In the kitchen Kathy notices a new sports article about a guy named Jerry Rahn, a bowler in Fergus who won three hundred dollars for getting a perfect score.

"Who's Jerry Rahn?" she calls to her mother as she tapes the hijacking article under Reasons Not To Fly In Airplanes.

"No idea," Connie yells back, "but it's an article that doesn't have to do with war or strikes or airplanes, and three hundred bucks is a lot of money. I was thinking maybe I should take up bowling."

That's how the hijacking section started. Connie thought she should take up flying. She'd never flown before. Still hasn't because she keeps developing theories about flying, or deterrents to flying, really. One of them has to do with the amount of worry it takes to hold an airplane in the sky.

Worry keeps airplanes from crashing, Connie's theory goes. Worry's a bit like prayer. Carries the same weight and has the same effect, which is sometimes none, depending on the moment. God -- being arbitrary and not always up to the foolishness of mortals -- listens or doesn't; acts or ignores. Worry's arbitrary too. You only know if worry works if you get a positive result.

The amount of worry necessary to keep an airplane flying is almost impossible to determine until a flight has successfully landed. Then there was enough worry. Everyone's done their part. So far, Connie hasn't found any newspaper articles to prove her worry theory, so Hijackings is a subcategory of Reasons Not To Fly In Airplanes, because extra worry is most surely required to keep a plane flying when it's been hijacked. And lately there have been hijackings almost every day.

"Tell me again what that article says, Kathy," Connie shouts.

"Four young men and a pretty woman landed the plane in Lima," Kathy shouts back. It's easier to indulge this passion of her mother's than it is to try to ignore it or to argue.

"Then they got stalled on the runway in Lima due to a dead airplane battery," she summarizes.

"Hear that?" Connie calls to her. "A dead battery saved them from crashing before they got to Cuba. Someone's mother had to do a lot of worrying to get that battery dead. They don't know how lucky they are."

The Checkout Girl is the story of a young woman who works as a cashier, while dreaming of Bobby Orr and being a hockey player. The book is set in 1970 when such dreams, at least for women, were ridiculous and, predictably, she has a rough time. Yet, in the end, she does manage to find a way to make a living from the ice and she survives, even thrives. Zettell outlines some of the inspiration behind the book."The first fragment of the story occurred to me while I was playing hockey, or shinny really, on an outdoor rink in Ottawa," Zettell recalls. "I was part of a group of middle-aged women who formed a hockey team we called MAMMAH (Middle Aged Menopausal Mothers Attempt Hockey) to play shinny one night a week throughout the winter. I was terrified I'd end up dead or at least with a concussion (which almost happened even with a helmet). But from the first night out, the skating, the exertion, the laughter and good-natured competitiveness, the sheer joy at playing outside in the dark in winter was exhilarating. I couldn't remember the last time I had had so much fun. So when I began to think about writing a novel in which a young woman was going through a sticky time in her life, I knew that hockey, but most particularly skating, some of it outdoors, would be at the heart of her life.