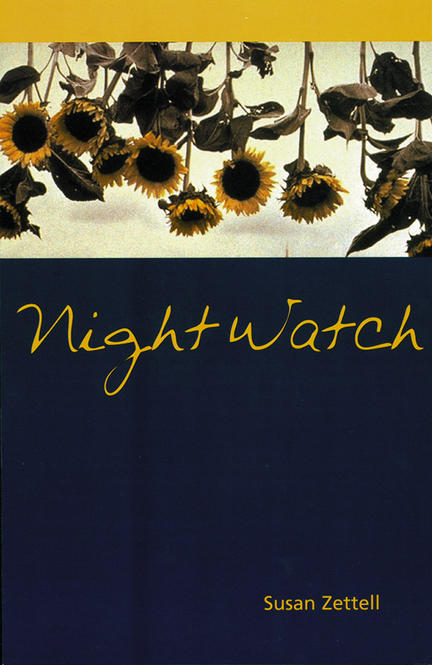 The stories in Night Watch, a new collection from Susan Zettell, delve deep into dark waters. Zettell looks unflinchingly at life's bountiful sorrows: the loss felt by abandoned children, the sudden intrusion of sickness or death, the fierce love suffered by the mother of a troubled child, the journey away from home and the shining, difficult path of return.

These are stories about rising to the surface, about bravely striking out and beginning again after loss. Zettell's handling of her characters makes us feel as if this is not fiction at all, but real life floating on the page. Her characters take us with them as they break through to light, and air, and sometimes laughter, finding their obstacles suddenly fluid as water, thin as a pane of glass, and changeable as a heart.

In January, Justine began wandering the aisles of grocery stores. She returned misplaced items to their rightful homes. They were waiting to be rescued, she thought. Like her, they were marooned, red onions weathering tinned ravioli storms.

And it was in January that Justine began to mutilate bread. Before Terry left, but during the time she knew he was going, their love a waning moon almost invisible. She bore a constant indefinable weight in her chest, which drew her shoulders down and pressed into her arms, made them heavy. Every time she came to the bakery aisle the weight spread into her wrists, pushed her hands toward the aromatic white bread, its flesh so soft, so inviting.

Each time she crushed bread she felt the thing that had been her heart, the weight that took up all of the space in her chest, begin to contract. And she would sigh, air forced from her lungs as if it was her last breath. A prayer-like exhalation: My heavy heart. My sinking heart. Oh, I'm losing heart.

"What?" Justine asked, and she looked the baker in the eye. His eyes were blue, almost turquoise, the same shade as the sky-and-sea icing on the children's birthday cakes. She turned to leave.

"You're hurting my bread," the baker wailed. He picked up a crushed loaf, dangled it like a football from his hand.

She began to run down the bakery aisle toward the cash registers and the electronic door.

"Everybody squeezes bread," she shouted over her shoulder.

The door popped open. The baker followed her, then stopped. The door closed behind him.

"It's your handprint," he said, and he turned the bread in his hand like a dying thing, then cradled it in his arm.

"Don't come back!" Justine heard him shout as she closed her car door.

Terry left in February. Now it is April and instead of mutilating bread, Justine checks the due date slips in the back of library books. It doesn't hurt anyone. She doesn't read the books. These days fiction puts her to sleep. Non-fiction is too real and sad. Or too harrowing.

What she likes is the texture of books, their heft, the cool feel of a just-turned page against her cheek. She likes the sharp lines on the due date slips, the dates contained in neat black rows. An orderly list of expectation, of fulfilled responsibility. A hopeful progression through time, so patient, almost tender.

One of the books she took out of the library yesterday was published in 1993. The library received it in September. Six people took it out that year. Seventeen in 1994. Four in '95, six in '96, two in '97, two in '98, none in '99. Now it's April 2000. Justine took the book out just so the date could be stamped in it. She and Rockette are going to return it later today, after Justine finishes some letters for Marco.

"One more year and I'll be able to retire," he told Justine as he set the profiles on her desk. "Freedom fifty-eight." Marco places ads in local papers throughout North America to link do-gooders with foreign kids. The kids are fakes, figments of Marco's imagination. And Justine's too. Marco pays her poorly.

"You're complicit, Justine," he tells her if she complains about the pay. Twenty cents a word. Sweatshop wages.

"Why do you work for Marco?" Terry used to ask her. "He pays you shit and the work's illegal. It could get us both in trouble."

Terry works for an investment firm: Andrews, McAuley, Trope. Justine had worked there too, researching new technology companies. Until she moved in with Terry and he worried that it might appear to be a conflict of interest if they both worked at the same firm, in the same office. Terry always worried about the way things would or would not appear.

"I'll support you until you find a new job," Terry promised, appearing to be a supportive lover.

Justine said, no, she'd find a job, and she'd use her savings to pay her share of expenses until she did.

But she didn't find a job. And she used up all of her savings. Terry did support her. For a while. Until she asked him to stop. Until he started to complain and make Justine feel as if she wasn't doing enough to find a job. Until she started a company writing letters and résumés, and helping clients to set up business profiles and to design advertising flyers. But there were never enough clients and there was never enough money. Until Marco came along. That's when Terry really started complaining.

Marco collects the proceeds from the adoptions and banks them in a special account. He uses some of the money for travel to exotic destinations where he takes photographs of the poorest people he can find. Field work, he calls it. Making sure everything is running smoothly. He managed to obtain charitable status, has the required number of board members (all friends, some of whom travel on the organization's account, too). He hired Justine to look after the paperwork. Marco invents the profiles of the kids: family, country of origin, circumstances. He pays Justine to type these, and to compose and type the letters from the children. "They need a woman's touch," he said.

He brings her onionskin paper, slightly musty and a bit stained. All the letters are typed on an old Underwood with a sticky "p" and "r". Dear Hampton Family, a letter will begin, the outline of the "r" and the "p" a reverse Braille, shadows pressed into paper. The paper smells like mildew softened with a hint of wood smoke and sandalwood.

"The Body Shop," Marco told her when she asked about the sandalwood. "Do-gooders love sandalwood from The Body Shop. Reminds them of their hippie days. Wood stoves, dope, incense and shit."

In Night Watch, Zettell's sophomore collection of short stories, those familiar with its streets and landmarks will recognize Kitchener in many of the stories. Reading about a city with which one is familiar certainly adds a dimension to the stories, but it's not the most compelling reason to pick up Night Watch... a reader senses the presence of a talented writer with the potential of becoming a major writer. As the title suggests, Night Watch is a dark collection of eight autonomous stories and a quartet of linked stories. But it's neither bleak nor depressing. Indeed, there is loss and abandonment, separation and absence, sickness and death. Cancer runs through the stories like a menacing leitmotif. But these sorrowful experiences are not presented as ends in themselves, but as integral to the process of life. Zettell's characters are immediately recognizable. We sympathize with their plights and their trials because Zettell presents them with such compassion and understanding.