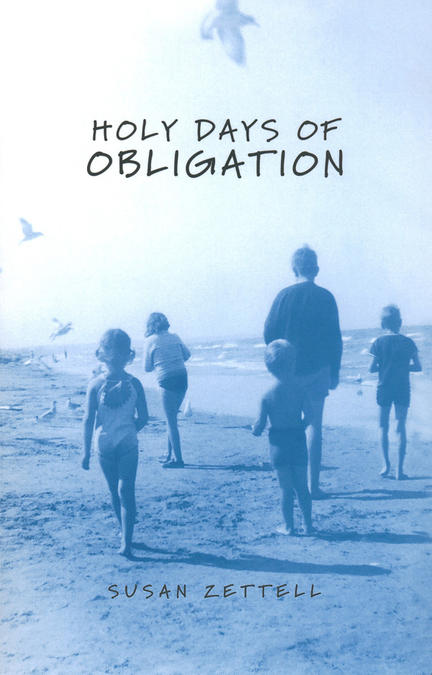 Holy Days of Obligation is a collection of short stories which weaves together the family history of a working-class Catholic family. Set in industrial Ontario, the stories are narrated by Bertie, who is the oldest of nine children. Bertie uneasily straddles two worlds: that of her parents, Frank and Elizabeth, who have too many children and not enough money, and that of her siblings, with whom Bertie shares the confidences and frustrations and adventures of growing up.

Bertie understands better than any of the others what her parents go through with the demands of their children -- from young Richard, who is constantly in trouble, to Catherine, whom Bertie resents because she is prettier and more popular than Bertie is herself, to Robert, who seems destined to be her only sibling to maintain a happy marriage until he inexplicably commits suicide. After Robert's death, which she had had a premonition about, Bertie inherits her grandmother's quilt. Bertie is unwilling to accept the quilt, which has always been associated with the untimely death of her Uncle Charlie, and carries all the responsibilities of being the eldest. After another close call for her sister Catherine, Bertie passes on the quilt, because she realizes "What happens in families has nothing to do with quilts and doodled words on paper. It has to do with possibilities. And with all we know and say about one another and all we know, and can't say. It has to do with what each of us keeps hidden." This collection of stories uncovers some of those hidden secrets and the bonds that hold a family together.

Susan Zettell has the ability to capture the blue-collar world of industrial southern Ontario much in the way Roddy Doyle captures the working poor of Ireland. Her characters are real people who live their lives with pride and dignity, and are never pitiable despite their poverty.

"I was just thinking about polishing shoes," I told my father as I took off my coat. His breakfast tray was waiting on the table. My father's face reminded me of photographs of just released prisoners-of-war: skeletal and grey, covered with a rash and stubble and on the edge of some expression if only there was enough energy. Most of his hair was gone, found in wads on his pillow one morning during a second round of chemotherapy after more tumours were found. There were a few wisps, which looked like bits of dried grass poking through the smoothness of the first winter snow.

"I'm not hungry," he said. He sat up and lifted the plastic cover off his oatmeal. He put the lid back but left his hand there covering the bowl. "Sometimes I just think of food and it makes me sick. Still I can't get it off my mind. I did eat supper last night and it stayed down." He did not look at me as he spoke, but at his hand which was bruised from the ritual bloodlettings for tests. "I think I'm still full from last night." These were the things we talked about, the ways in which we measured hope.

"Shoes were Sunday," my father said to me. He looked up and right into my eyes. "But what about Holy Days of Obligation?"

Their favourite Holy Day is Good Friday, when they have take-out fish and chips from The Stones of Rockway Restaurant. The best in town, Frank maintains, and his family agrees. After the zealous piety of Lent -- the extra masses, The Stations of the Cross, the giving up of sweets and treats -- Good Friday services peak in an extreme of lengthy prayers and devotions, a long fast, a weariness at keeping vigil with Christ's suffering and death: the reception of the cross, the first fall, the meeting with His mother, Simon of Cyrene carries the cross. But combined with the feeling of hardship is the feeling of coming to the end. And Frank's yearly decision to order fish and chips fills his family with a feeling of delighted, rising happiness. Frank takes a sheet of paper and asks each of his nine children how many pieces of fish they want, and whether they can eat a whole order of fries. "Remember how big the orders are... Michael didn't eat all of his last year, if you recall," he reminds them. There is no malice in his voice. He will order exactly what he is told. Frank's children tell him what they want and eye him warily, as though at any moment he will change back into the father they know.

Frank calls the restaurant with the order and asks how long before it will be ready. They sit and wait and wonder out loud if this is a good time to leave because if the traffic is heavy it will take fifteen minutes, but if there is no traffic (a miracle, they say) it won't take so long, and really, the waitress said it would be ready in half an hour so they may as well wait a little longer at home. And isn't it awful when they get there too soon and have to wait in line. One year, the year Richard broke his leg, remember, the line went all the way out the door and around the side of the building. Imagine that, someone says. This year, it's Margaret's and Sandy's turn to go with Frank; get your coats on, the wind is cold, their mother tells them. Frank slips on his jacket.

While Frank is gone they get out the paper plates, napkins, ketchup, salt and vinegar. Catherine stations herself at the window and calls, "Here comes a car," and "Nope, it's not Dad," and "Nothing yet," and "He's coming! They're here!" Richard hits Michael, who howls. Simon wakes up from his nap and begins to cry. Elizabeth yells to them all to settle down and get to the table. They push and shove at the chairs; everyone wants to sit beside Frank or Sandy or Margaret who will tell them about the line-up, where they had to park, who they knew and talked to while they were waiting for the fish and chips.

Frank comes in and frowns at the noise, but doesn't comment. "Let's eat," he says as he empties the brown paper bags with dark markings where the grease has seeped through. The food has a slightly papery odour and Frank says, "Mother, you serve." She opens the boxes and oh, this one has golden brown pieces of steaming fish, and so does this one. Bertha says she hopes the numbers are right because she's starved and the next box has french fries and sure enough there is plenty to go around. "There never looks to be enough," someone laughs, and "go get the salt from the back of the stove," and "please pass the ketchup." Somehow the first mouthful goes in, the taste of fries with their quickly uncrisping texture--but no one complains--and their earthy potato tang and the spice of the ketchup, the saltiness, the zing of vinegar and they're really too hot but that doesn't stop anyone.

They eat faster and faster because the food tastes so good, and there might be second helpings, and because it's special. The fish is pure white inside its golden coat of batter, a marvel to look at. And it tastes sweet, not at all fishy. The batter has a doughnutty flavour, delicious, but suddenly there isn't room for another mouthful. Everyone slows down, begins to pick at their fries. "Just two more," Robert says and groans. There's lots left over, was never any need to eat so fast, and the smell begins to change. It is heavier, thick with grease and vinegar and fish. The bags are slippery as Bertha and Elizabeth fill them with garbage. "Who's going to Vigil tomorrow?" Elizabeth asks. "I'm stuffed" is all the answer she gets.

I rubbed the skin around my eyes with my fists, pressed it hard onto the bone. The heat and dry air in the hospital made my sinuses feel as if they would explode. Dr. Zuber came in to visit my father. He came every weekday, and even on the weekend if he was checking on an emergency patient, or attending someone who was dying. We looked forward to seeing him. When his visit was over I would leave to go to work.

He was short, with wavy mounds of unruly greying hair. Several wild thick grey hairs jutted from his eyebrows, and one or two from his ears, as well. That day we were waiting for the results of the CAT scan that would tell us how successful the chemotherapy had been.

"Sinuses sore?" he asked me, and I was not surprised that he knew what was bothering me. When he visited he leaned his hip into the foot of my father's high bed. He looked at him and asked the exact right questions: "A little pain today, Frank?" when my father had a bad night. Or "Do you need any cream for your rash?" when my father had just discovered a rash on his arm the afternoon before. Dr. Zuber told us of the latest drugs, the laser surgery a colleague had just performed on a tumour, a success with deep radiation, what could be done with machines. Every time he visited there was something new, something to make us feel optimistic.

After he asked about my sinuses, he moved to the window. He looked out and didn't turn to face us. It was a raw day, he told us. His car battery had died. It had never done that in November before. The wind was out of the north, that must be why. He had a finger that got frostbite when he was a child and it turned white on cold days.

"See," he said, and he turned and walked over to the bed to show us. "I'll be in again tomorrow," he told my father in a voice that had begun to sound as flat and hard as ice. My father didn't answer, but looked at the place where Dr. Zuber had stood by the window.

Dr. Zuber left. I watched him go and wondered about what he hadn't told us. When I turned to ask my father what he thought, I saw that he was crying. It was not like the time he cried for Robert. This time his crying had no sound. He held it in a place inside himself. "Call your mother," he told me. "I'm going home."

The 15 linked stories of Susan Zettell's debut collection read like an intimate memoir, and indeed move with the deep emotional currents of personal memory.... Life events that inspire the hackneyed in art are here crafted almost invariably with a precision that brings primal shocks of recognition. Keen, unsparing observation expressed in palpable, sometimes shimmering prose moves mind and heart on almost every page. Zettell's most striking memory jog is her mastery of scent. There are passages here almost certain to return you to a redolent childhood world where living fully and sensually in the here and now was once as natural as breathing.