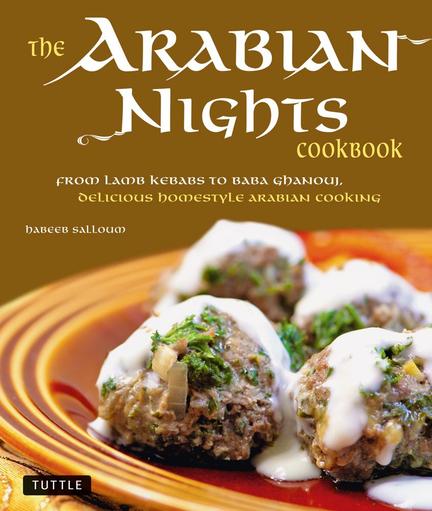 Prepare delicious and healthy meals with this award-winning Arabian cookbook

For untold centuries, the Bedouin of the Arabian Peninsula, in their desert tents, have served their honored guests lavish meals featuring roasted lamb with rice. Bedouin hospitality has not changed over the ages but Arabian cuisine has undergone a remarkable evolution in the last 100 years, making it extremely diverse. This diversity is due, in part, to the explosion of wealth on the Arabian peninsula which has drawn people—along with their foods and cooking methods—from aroundthe world.

The blending of these culinary worlds has produced something remarkable. InThe Arabian Nights Cookbook, author Habeeb Salloum has compiled an amazing array of recipes that celebrate this blending of cultures while still making it compatible with the everyday kitchens of the Western world. From the familiar, Hummus Bi-Tahini, to the unique, Stuffed Lamb, Salloum offers an accessible world of savory tastes and memory provoking aromas.

Habeeb Salloum is the author of many books, including Bison Delights: Middle Eastern Cuisine, The Arabian Nights: From Lamb Kebabs to Baba Ghannouj, From the Lands of Figs and Olives, and Classic Vegetarian Cooking from the Middle East and North Africa. His awards include the Gourmand Best in the World Prize for Best Arab Cuisine Cookbook and the Cuisine Canada Prize. He lives in Toronto.

"This is a great book for those new to Middle Eastern cuisine or wanting to focus on the Arab Gulf region. Salloum has adapted the recipes for the Western kitchen while still maintaining their authenticity." —Tara's Multicultural Table blog

"A pleasure to browse through and inspiring to plan meals with,The Arabian Nights Cookbook: From Lamb Kebabs to Baba Ghanouj, Delicious Homestyle Middle Eastern Cooking will prove to be an enormously popular addition to any and all ethnic cookbook collections." —Midwest Book Review

"Canada-based food and travel writer Salloum and photographer Suan Lim collaborate to produce a beautiful cookbook of over 100 dishes, many of which are restaurant standards that fans of Arab cooking will recognize…A valuable addition to the catalog of Middle-Eastern cooking,The Arabian Nights Cookbook is comprehensive enough for the home cook without being so large as to paralyze." —Publishers Weekly

"[…] a plethora of delicious recipes that hail from the Arabian Peninsula and Gulf." —Kevin is Cooking

"Salloum chooses the best of the basic recipes found in Arabian home cooking and Middle Eastern restaurants and provides valuable explanations of dishes. An excellent choice for experienced cooks who have yet to conquer the basics of Arabian cuisine." —Library Journal

"A celebration of the savory and diverse foods of the Arabian Peninsula, no kabob is left unturned with this thoroughly enchanting new collection of recipes. Each page is filled with photos, tips, and recipes accompanied by a short anecdote about the foods used." —Sante magazine

Other titles by Habeeb Salloum

The Scent of Pomegranates and Rose Water

Arab Cooking on a Prairie Homestead

Recipes and Recollections from a Syrian Pioneer (New Edition)

Foods of the Medieval Arab World

Classic Vegetarian Cooking from the Middle East and North Africa