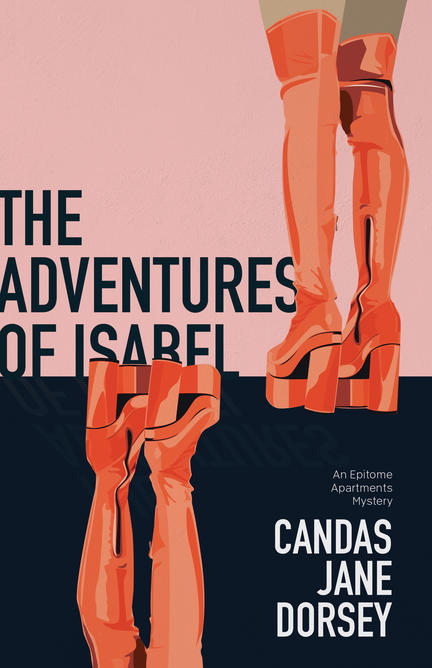 Book one in a new playful and trope-bending mystery series featuring a queer, nameless amateur detective.

“Candas Jane Dorsey’s terrific mysteries are what would happen if Raymond Chandler and Frank N. Furter collaborated on cozies and the heroine were a pansexual private detective with heart, smarts, and a T-shirt saying MASCARA IS THE NEW NOIR.” — Sarah Smith, author of the New York Times Notable Book The Vanished Child.

Rescued from torpor and poverty by the need to help a good friend deal with the murder of her beloved granddaughter, our downsized-social-worker protagonist and her cat, Bunnywit, are jolted into a harsh, street-wise world of sex, lies, and betrayal, to which they respond with irony, wit, intelligence (except for the cat), and tenacity. With judicious use of the Oxford comma, pop culture trivia, common mystery tropes, and a keen eye for deceit, our protagonist swaggers through the mean streets of — yes, a Canadian city! —  and discovers that what seems at first to be just a grotty little street killing is actually the surface of a grandiose and glittering set of criminal schemes.

Candas Jane Dorsey is an internationally-known, award-winning author of several novels, four poetry books; several anthologies edited/co-edited, and numerous published stories, poems, reviews, and critical essays. Her most recent fiction includes novels The Adventures of Isabel; What's the Matter with Mary Jane?; and The Man Who Wasn't There; and short fiction Vanilla and Other Stories and . For fourteen years, she was the editor/publisher of the literary press, The Books Collective, including River Books and, for a time, Tesseract Books. She was founding president of SFCanada, and has been president of the Writers Guild of Alberta. She has received a variety of awards and honours for her books and short fiction, including most recently, the 2017 the WGA Golden Pen Award for Lifetime Achievement in the Literary Arts. She was inducted into the City of Edmonton Arts and Cultural Hall of Fame in 2019. She is also a community activist, advocate and leader who has served on many community boards and committees for working for neighbourhoods, heritage, social planning and human rights advocacy. She lives in Edmonton, Alberta.

“Look, kiddo,” said Denis finally, “you need a job. Hep needs someone who can ask hard questions to people without offending them. Nothing like a registered social worker to do that on an hourly basis. Hep has the money for the hourly basis.”

“When did you two talk this over and decide I was the next Nancy Drew?”

“Before I called you,” Denis said, enough less drunk than we were to still be shamefaced. (We, more simply, were just shitfaced.)

“Why the fuck didn’t you tell me this then? I’d have stayed home with Bunnywit and eaten flies. Forget it. I’ve got my new career all mapped out. ‘AAAAAlthea. Poetic but lusty. By the minute, hour, or week. Anything you want.’ How’s that sound?”

“It sounds stupid. These days you gotta have a dungeon and six thousand dollars’ worth of video equipment just to turn a trick. And besides, Althea? Really? Why don’t you just use your own . . . shit, no way you’re distracting me. You need a source of income, if only to pay me back the big bucks you owe me. Not that I’d be crass enough to mention that as a way of trying to influence you.”

Hep then named an hourly rate which made even my overinflatedly self-indulgent subconscious blink, and between the emotional blackmail of being reminded how much I owed Denis, the memory of my empty cupboard, evocations of the pitiful dead kid, and greed, I was persuaded — provisionally, with confirmation to be given once I sobered up — to give up my career as a call girl and become a detective.

“From hanging out on street corners with prostitutes to attending glittering high-society charity balls with billionaire fraudsters, the always game protagonist proves herself to be a first-rate detective. Fans of unconventional mysteries will be richly rewarded.” — Publishers Weekly, starred review

“The Adventures of Isabel is a winner! The narrator’s voice alone is worth your time — which will be brief, because it’s a page-turner, and then when you’re done you’ll wish it had been longer. Add to that the characters, most of whom I promise you you’ve never met before, the multi-strand plot, and Bunnywit the cat, and you’ll thank me for recommending this book to you. The best part: it’s a series! There’ll be more!” — S.J. Rozan, bestselling author of Paper Son

“Candas Jane Dorsey’s terrific mysteries are what would happen if Raymond Chandler and Frank N. Furter collaborated on cozies and the heroine were a pansexual private detective with heart, smarts, and a T-shirt saying MASCARA IS THE NEW NOIR. There’s female bonding, sex (lots of it), and a cat or two. You’ll scream with laughter, you’ll checkmark phrases. And then, if you’re a nice person and love your friends, you’ll put these books in their hands and insist they read them too.”  — Sarah Smith, author of the New York Times Notable Book The Vanished Child

“In The Adventures of Isabel, we see Candas Jane Dorsey obviously having as much fun writing as the reader will have reading. A little Hammett, a little Hiaasen, a little Lot 49, this is the first book in a series that demands to be read with writerly intention. Unlike Robbe-Grillet or Eco, Dorsey doesn’t want to destroy the detective novel with her postmodern take on the form. She seeks instead to shake the reader out of submission and into a clearer vision and examination of the underpinnings of the genre — the real crime and grime and meanness of the streets on which it’s set. The laughs are thrown in for free.” — Janice MacDonald, author of the Randy Craig Mystery series

“When Candas Jane Dorsey takes on a new genre, readers would do well to sit up and take notice. The Adventures of Isabel is smart and razor-sharp, with unforgettable characters and a plot that won’t let you go until the last page. You’re going to love it!”— E.C. Bell, author of the Marie Jenner Mystery Series

Other titles by Candas Jane Dorsey

The Story of My Life Ongoing, by C.S. Cobb

What’s the Matter with Mary Jane?

A Paradigm of Earth

Vanilla and Other Stories