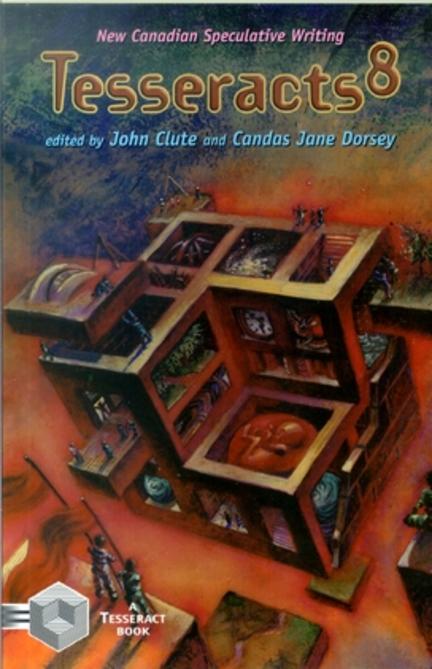 Tesseracts8 brings together twenty of the best pieces of Canadian speculative fiction, selected from both established and new, English and French writers by award-winning editors John Clute and Candas Jane Dorsey.

Readers of all types of speculative fiction - science fiction, fantasy, magic realism and horror - will find their flavor in the eighth anthology in the renowned Tesseracts series.

Candas Jane Dorsey is an internationally-known, award-winning author of several novels, four poetry books; several anthologies edited/co-edited, and numerous published stories, poems, reviews, and critical essays. Her most recent fiction includes novels The Adventures of Isabel; What's the Matter with Mary Jane?; and The Man Who Wasn't There; and short fiction Vanilla and Other Stories and . For fourteen years, she was the editor/publisher of the literary press, The Books Collective, including River Books and, for a time, Tesseract Books. She was founding president of SFCanada, and has been president of the Writers Guild of Alberta. She has received a variety of awards and honours for her books and short fiction, including most recently, the 2017 the WGA Golden Pen Award for Lifetime Achievement in the Literary Arts. She was inducted into the City of Edmonton Arts and Cultural Hall of Fame in 2019. She is also a community activist, advocate and leader who has served on many community boards and committees for working for neighbourhoods, heritage, social planning and human rights advocacy. She lives in Edmonton, Alberta.

Other titles by Candas Jane Dorsey

What’s the Matter with Mary Jane?

The Adventures of Isabel

A Paradigm of Earth

Vanilla and Other Stories