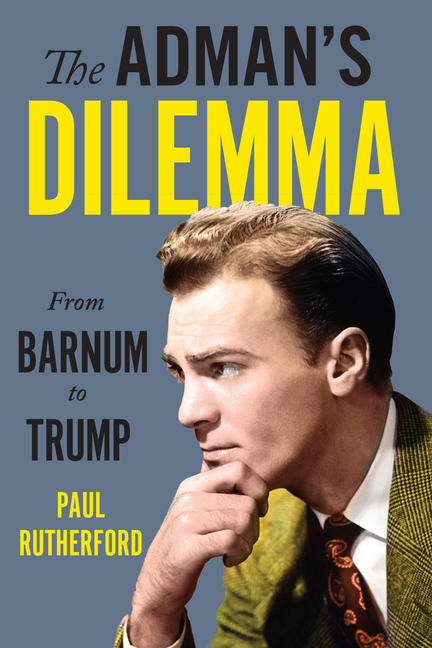 The Adman’s Dilemma is a cultural biography that explores the rise and fall of the advertising man as a figure who became effectively a licensed deceiver in the process of governing the lives of American consumers. Apparently this personage was caught up in a contradiction, both compelled to deceive yet supposed to tell the truth. It was this moral condition and its consequences that made the adman so interesting to critics, novelists, and eventually filmmakers.

The biography tracks his saga from its origins in the exaggerated doings of P.T. Barnum, the emergence of a new profession in the 1920s, the heyday of the adman’s influence during the post-WW2 era, the later rebranding of the adman as artist, until the apparent demise of the figure, symbolized by the triumph of that consummate huckster, Donald Trump.

In The Adman’s Dilemma, author Paul Rutherford explores how people inside and outside the advertising industry have understood the conflict between artifice and authenticity. The book employs a range of fictional and nonfictional sources, including memoirs, novels, movies, TV shows, websites, and museum exhibits to suggest how the adman embodied some of the strange realities of modernity.

Paul Rutherford is Professor Emeritus in the Department of History at the University of Toronto. He is the author of several books published by UTP, including When Television was Young (1990), The New Icons? (1994), Endless Propaganda (2000), Weapons of Mass Persuasion (2004), and World Made Sexy (2007).

Excerpt: The Adman's Dilemma: From Barnum to Trump (by (author) Paul Rutherford)

Mad Men was one of the critical hits of the 2007/8 television year, winning a bevy of awards (though never a huge audience) for its portrayal of the life and times of the fictitious Sterling Cooper advertising agency in New York City in the 1960s. (Its audience peaked at around 4.7 million viewers for the premiere shows of seasons 5 and 6.) It painted a picture of a place full of cigarettes and booze, sexual shenanigans, competition, much cynicism, and much deceit. Often the drama focused on the troubled life and times of one person, Don Draper, the highly successful creative director of Sterling Cooper, who demonstrated again and again his ability to fashion brilliant ads. In the office and at home he proved a master of deceit: actually, his whole life was something of a lie because he had stolen the name of another person. Whatever his success at the office, he found his private life empty, hollow, and he searched for some experience more real, more authentic in a series of eventually unsatisfying affairs with women.

In the next few seasons the popularity of Mad Men and its characters boomed, even airing outside America: it became a phenomenon that sparked all sorts of notice and commentary in the media. The show produced fan sites and fan books, discussions about fashion (because the cast was so stylish) and gender (because the men were so sexist and the women so pleasing), and a new male sex symbol, Jon Hamm, who played the role of Draper. The term “Mad Men” came to serve as a convenient label for a style of manhood, sometimes confident and effective, sometimes reactionary or even repressed. According to Mindset Media, a market research firm, the show was especially attractive to the so-called creative class, very liberal, curious, and maybe a bit dreamy, the types who bought Apple and Audi. No doubt more significant to marketers, the Mad Men audience was full of upscale viewers, in their adult years (25 to 54), earning $100,000 or more a year, thus prime consumers. Academe soon got into the act with a symposium, “The Reality of Mad Men,” at Duke University (2008) and a volume published in Blackwell’s Philosophy and Pop Culture series (2010), followed by a small collection of studies in the next five years. One clever author, Dr Stephanie Newman, a popular psychoanalyst, decided Draper and his compatriots were emblematic of the terrible plague of narcissism that bedeviled the populace of modern America. Not everyone was pleased with the show, of course: Daniel Mendelsohn, in the New York Review of Books (2011), wrote a scathing review of the program’s first four seasons. But even he found the show had a deep fascination for viewers who were children back in the 1960s, which in part explained why it had swarmed through pop culture, or so he speculated. By the time Mad Men ended, in 2015, after seven seasons, the show was ranked along with Sex and the City, The Sopranos, or Breaking Bad as one of the sensations of early twenty-first century television.

Yet however imaginative and innovative the show – for television entertainment in America had rarely dealt with advertising as drama – Mad Men spoke to its audience in a familiar tongue. Its treatment of admen and advertising reflected views that were commonplace at the midcentury, evident in, for example, a bestseller like Frederic Wakeman’s The Hucksters (1946) or the Rock Hudson/Doris Day movie Lover Come Back (1961). In fact Matthew Weiner, the showrunner, was obsessed with authenticity, getting the right look and feel, using all manner of artefacts and texts from the period to shape scripts and acting. Mad Men was a marvelous visual representation of what I have come to call “the adman’s dilemma.”

At its core the adman’s dilemma described a moral condition produced by the practices of deception: it referred to the sense of malaise supposedly, and according to some authors necessarily, suffered by the masters of deceit. The “adman” denoted a male engaged in the practice of advertising, whether as an entrepreneur, a self-employed professional, or an employee of an agency or business. That person might be a huckster, like the patent medicine moguls of the nineteenth century, a copywriter or an art director (often referred to now as “creatives”), an account executive, a media buyer, an agency manager or head, a market researcher, and more recently the account planner and web developer (employed by an agency). An ad is a paid message, a distinct form of publicity, meant to sell a product, service, industry, cause, or person (and occasionally to un-sell a vice or a rival). People of all sorts came to treat advertising in the broad sense as a dynamic mix of art, information, entertainment, and deception: the mix varied according to the time, the brand, and the source. If it was simply a form of untruth, of deceit, it would be much less interesting – and likely less effective. The elaboration of regulations against deceptive or false advertising worked to mask the presence of artifice, at least partially, in most publicity. That certainly hamstrung efforts to regulate the deceptions, especially the exaggerations and suggestions, of advertising. Still, in time, consumers, the veterans of marketing hype, responded to the mass of publicity with their own mix of belief and disbelief. They “knew” that publicity contained much fiction. Thus the adman became in effect, though never in law – de facto rather than de jure – a kind of licensed deceiver allowed to transgress the rules of truth-telling.

Put a bit differently, the adman’s dilemma signified how many writers and filmmakers came to imagine the corruption of the soul engendered by a surfeit of artifice. The dilemma was always a matter of perception. Outsiders mostly saw this as a predicament or warning that faced any persuaders who laboured in the advertising industry. Insiders were certainly aware of the perception that clearly affected their reputation and, perhaps, their sense of self-worth. But, again usually, they denied its relevance or even its existence – as long as they remained a part of the advertising community. Renegades often did explore the dimensions of the predicament, if only to explain or justify their escape from a life of moral disorder. In its basic form a story or tale about the adman’s dilemma told of the young man who strove to excel at advertising, one of the central institutions of modernity, how he normally succeeded but eventually came to doubt the virtue of his existence (what’s called “the liar’s plight”), the moral anguish that resulted, and what he did to resolve his situation. His biography became a grand exercise in the process of self-fashioning, especially the choices made or not made to realize success or secure peace of mind. The recognition of the condition took definite shape in the two decades after the Second World War in America. A few earlier works, such as H.G. Wells’s novel Tono-Bungay (1909) and the memoir of Helen Woodward (a prominent adwoman), had already foreshadowed the definition of this affliction. But it was a postwar series of hit novels and movies that thoroughly explored the dimensions of the angst, perhaps the most famous being Sloan Wilson’s The Man in the Gray Flannel Suit (1955). The dilemma was both echoed and denied, occasionally finessed or (temporally) solved, in memoirs, polemics, and other discussions – in short, in works of fact as well as fiction. Furthermore that dilemma, if it evolved over time, persisted into the twenty-first century, and it affected the perception and reputation of other individuals also in the persuasion business, such as the public relations counsel or the advertising woman (the chief reason some of them appear in this biography).

"Through a selective, chronological succession of literary and film/television analysis…Rutherford traces the evolution of the American adman (later accompanied by the adwoman, though not quite as late as one might assume) from an opportunistic, showboating rascal to today’s somewhat more sinister and thoroughly institutionalized figure."

"Rutherford’s discussions of a final burst of creative energy in the 1960s and the subsequent waning of the ad maker in a world of pure images and brand imperialism are fascinating prequels to a cultural turn through which we are still wandering."

Other titles by Paul Rutherford

From Barnum to Trump

The Advertising of Public Goods

The Art of Television Advertising

When Television was Young

An Anthology of Early Articles on Urban Reform

The City Below The Hill