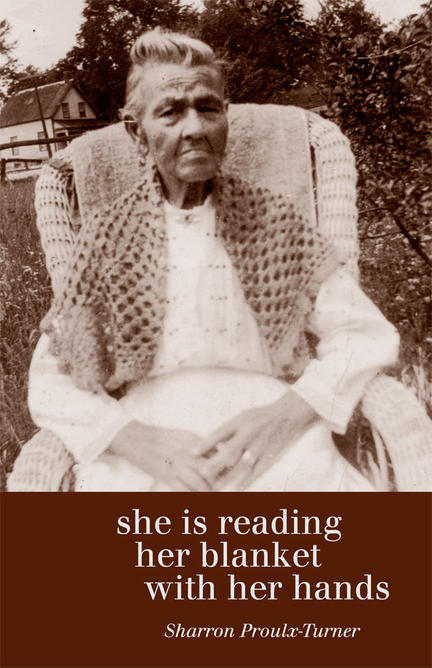 I am humbled by the women and girls in my world, and I thank the great spirit for their presence. my métis grandmother, germaine proulx-boyce, taught me to embroider, to work with ribbon. I’m told I have hers and exilda dufort-lafrance, my great-great grandmother. I’ve passed these hands to my daughter, barb, and to my granddaughters, jessinia and mazie. these hands of mine love to write, and I’m told my great grandmother, rosina lafrance-proulx, was a poet, that she talked to the trees, to the plants and animals. and now she talks to me. more than fifteen years ago, rosina’s voice in mine, I woke up to the words “she is reading her blanket with her hands,” the birthing of the poems in this book.

she is reading her blanket with her hands: the dedication poems

The first section of this book serves as exemplary work for those who are studying the prose poem as a form. Proulx-Turner, a Métis, uses a combination of prose poetry and free verse in a way that is fresh and exciting. She employs images based in family, nature and the land. Although many of these pieces focus on everyday life experiences, they are never banal. With its many historical and literary references (including to other Aboriginal writers), the book could serve as the basis for term papers or other scholarly work.