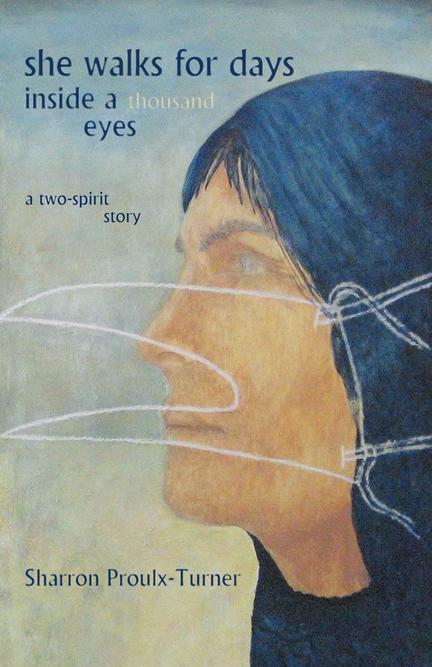 In she walks for days inside a thousand eyes (a two spirit story),Sharron Proulx-Turner combines poetry and history to delve into the little-known lives of two-spirit women. Regarded with both wonder and fear when first encountered by the West, First Nations women living with masculine and feminine principles in the same body had important roles to play in society, as healers and visionaries, before they were suppressed during the colonial invasion.she walks for days inside a thousand eye (a two-spirit story) creatively juxtaposes first-person narratives and traditional stories with the voices of contemporary two-spirit women, voices taken from nature, and the teachings of Water, Air, Fire and Mother Earth. The author restores the reputation of two- spirit women that had been long under attack from Western culture as she re-appropriates the lives of these individuals from the writings of Western anthropologists and missionaries.Sharron Proulx-Turner creates a new kind of epic as she bears witness to the past. With gracious concern for tradition, and sly, soaring language, she retells a vital chapter from the First Nations, and Canadian, story.

Told from several perspectives, including that of ‘young crow’, this unique book offers an empowering and sweeping presentation of First Nations histories. Using both prose and poetry, the author weaves a tale that encompasses the breadth of tradition from the origin of the Pleiades to the removal of the Cherokee people from their lands in Oklahoma. Overall, the book reads as if it is an extended story/lesson from an elder. Although the language is poetic, it is approachable and could provide inspiration for student-generated writing or passages for oral interpretation.

Caution: Some may be concerned by the book’s open (but not overtly sexual) discussion of what Proulx-Turner calls “two-spirit women” – women living with masculine and feminine aspects in the same body.

she is reading her blanket with her hands