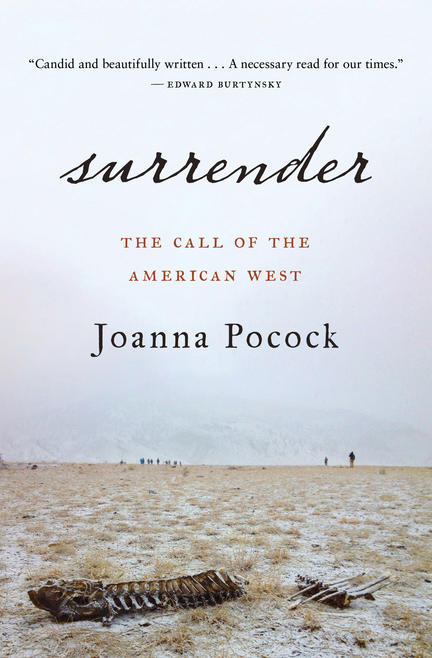 In the style of Barry Lopez, Annie Dillard, and Eula Biss, Surrender explores the changing landscape of the American West and the radical environmental movements that have taken root in response to the increasingly urgent climate crisis.

Blending personal memoir with insightful reportage and vivid nature writing, award-winning author and essayist Joanna Pocock investigates the changing landscape of the West and the radical environmental movements that have taken root in the Mountain States. She witnesses the annual tribal bison hunt near Yellowstone National Park, where she meets a scavenger community honing ancestral skills. She joins Finisia Medrano, a transgender rewilder who for many years has been living on the “hoop,” following her food source by seasonal migration. She attends the Ecosex Convergence — an annual gathering of people who place their relationship with the earth above everything else — and attends a workshop led by Reverend Teri Ciacchi, a sexologist, priestess of Aphrodite, and holistic spiritual healer in the Living Love Revolution Church.

Surrender is a keen and compelling examination of the outsider eco-cultures blossoming in the new American West in an era of increasing climatic disruption, rising sea levels, animal extinctions, melting glaciers, and catastrophic wildfires.

JOANNA POCOCK is an Irish-Canadian writer living in London, U.K. Her essays, reviews, and travel pieces have appeared in Distinctly Montana, Litro, the Sunday Independent, the Los Angeles Times, the Nation, Orion, Tahoma Literary Review, and 3:AM, and on the Dark Mountain blog. She was a finalist for the 2017 Barry Lopez Narrative Nonfiction Award and the 2021 Arts Foundation Futures Award for Environmental Writing, and she won the 2018 Fitzcarraldo Editions Essay Prize for Surrender. She teaches creative writing at the University of the Arts in London and works as a freelance editor for a variety of publishers.

Excerpt: Surrender: The Call of the American West (by (author) Joanna Pocock)

Most ecological movements look back. Some communities model themselves after an agrarian idyll from a hundred and fifty years ago: the life of the homesteader growing their food, keeping goats, making their own soap and keeping bees. Some communitarians go even further back, to our Palaeolithic ancestors with their migration, foraging, replanting of seeds, and brain-tanning hides as their baseline for the Good Life. What all rewilders, off-gridders, ancestral skills practitioners, and those seeking to live in harmony with the planet seemed to have in common was a nostalgia for a world that once existed but was now lost.

The striking thing about the ecosex movement is its insistence on looking forward. In their eyes, social change is needed to envision a planet fit to be lived on. Their focus on consent is perhaps necessary for the uncharted waters they are diving into. Nostalgia is replaced by excitement over what the world could be. Who cares what it once was. Ecosexuals are not trying to recreate some lost Eden, but are instead imagining a whole new one with a new kind of society better suited for survival. They all drive cars and most of them rely on technology — a Surrender Facebook page exists — but most of them, though not living off-grid, are concerned with environmental issues. It is an approach that stands out from the others. Unlike so many ecologically based movements, this one is not misanthropic — it celebrates humans, rather than wishing them dead for their ecocidal ways.