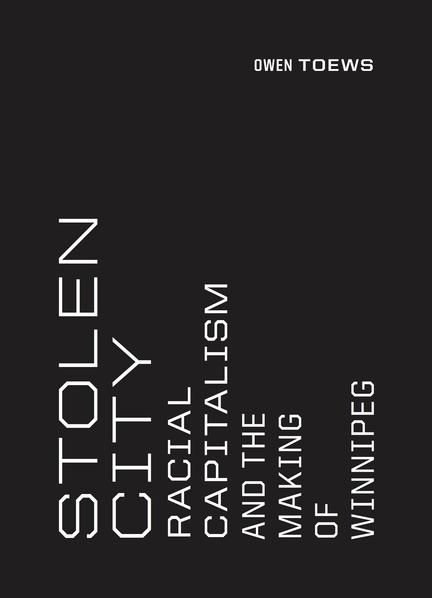 Through a combination of historical and contemporary analysis this book shows how settler colonialism, as a mode of racial capitalism, has made and remade Winnipeg and the Canadian Prairie West over the past one hundred and fifty years. It traces the emergence of a 'dominant bloc', or alliance, in Winnipeg that has imagined and installed successive regional development visions to guarantee its own wealth and power. The book gives particular attention to the ways that an ascendant post-industrial urban redevelopment vision for Winnipeg's city-centre has renewed longstanding colonial 'legacies' of dispossession and racism over the past forty years. In doing so, it moves beyond the common tendency to break apart histories of settler-colonial conquest from studies of urban history or contemporary urban processes.

Owen Toews is a geographer based in Winnipeg, Canada. He is currently working on a book project about land policy and the human geography of the Prairie West, 1869-2015 and teaching in the Department of Environment and Geography at the University of Manitoba. He holds a Ph.D in Human Geography from the City University of New York (CUNY) Graduate Center and has worked as an instructor at the Macaulay Honors College-Brooklyn College and the Hunter College Department of Urban Affairs and Planning. He is a founding member of the DIY museum collective Winnipeg Arcades Project, a member of the abolitionist prisoner solidarity group Bar None, and acquisitions editor for ARP Books' Semaphore series.

A sweeping and magnificent spatial history of a city founded in the midst of imperial economic crisis--a crisis resolved through western expansion. Toews intricately weaves theories of racial capitalism into Indian policy from the nineteenth century to contemporary urban development in Winnipeg. This book is a must read for anyone trying to understand the ways that colonization produces spaces that are shaped and then reshaped by hierarchies of difference, rooted in a never-ending struggle to turn Indigenous land into property. -Shiri Pasternal, author of Grounded Authority: The Algonquins of Barriere Lake Against the StateToews moves from the violent Canadian expansion of the mi-nineteenth-century to the hockey arenas, glass condos and incarceration of the 2000s, tracing how different moments in Winnipeg's history reframed the dispossession of Indigenous people and land. Stolen City is carefully grounded and analytically trenchant, while keeping faith in the possibility of a Winnipeg that is something more than stolen. - Adele Perry, author of On the Edge of Empire: Gender, Race, and the Making of British Columbia, 1849-1871Stolen City is creative, theoretically innovative, and skillfully crafted from an exceptional range of historical and ethnographic data woven into a convincing analysis. The insights that Toews offers are significant for those who are working on these issues across the globe. - Setha Low, author of Behind The Gates: Life, Security, and the Pursuit of Happiness in Fortress AmericaStolen City is a riveting account of pan-Indigenous resistence to settler colonial land claims, idustries, and (sub)urban development projects. Toews contributes to an exciting.and timely conversation on the relationships between racial capitalism and settler colonialism that have relevance for struggles against gentrification and enclosures of land and for planning decolonial futures. - Jenna M. Loyd, author of Boats, Borders, and Bases: Race, The Cold War, and the Rise of Migration Detention in the United States