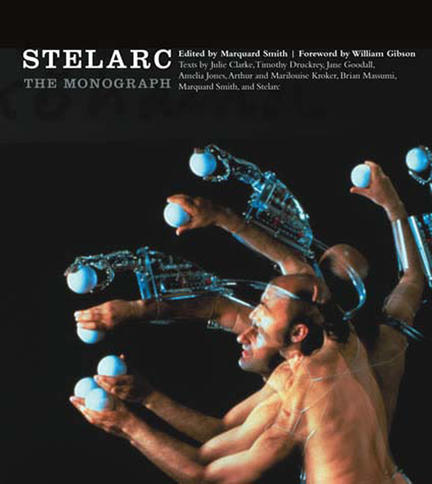 A user's guide to Stelarc, the international performance artist whose extreme performances explore the borderland between bodies and machines.

Stelarc is the most celebrated artist in the world working within technology and the visual arts. He is both an artist and a phenomenon, using his body as medium and exhibition space. Working in the interface between the body and the machine, employing virtual reality, robotics, medical instruments, prosthetics, and the Internet, Stelarc's art includes physical acts that don't always look survivable—or, as science fiction novelist William Gibson puts it in his foreword, "sometimes seem to include the possibility of terminality."

Stelarc's projects include Third Hand, a grasping and wrist rotating mechanism with a rudimentary sense of touch that is attached to the artist and activated by EMG from other body areas; Amplified Body, in which the artist performs acoustically with his brainwaves, muscles, pulse, and blood flow signals; and the Stomach Sculpture, a device—or "aesthetic adornment"—placed in the artist's stomach and presented through video. Works in progress include the Extra Ear Project, a soft prosthesis of skin and cartilage to be constructed on the artist's arm. Stelarc's work both reflects and determines new directions in performance art and body art. Although there have been hundreds of articles written about Stelarc since he began performing in the late 1960s, Stelarc: The Monograph is the first comprehensive study of Stelarc's work practice in over thirty years. Gathering a range of writers who approach the work from a variety of perspectives, it includes William Gibson's account of his meetings with Stelarc, Arthur and Marilouise Kroker's emphatic "WE ARE ALL STELARCS NOW," and Stelarc himself in conversation with Marquard Smith. Taken together, these writers give us a multiplicity of ways to think about Stelarc.

Marquard Smith is Director of the Institute for Modern and Contemporary Culture, University of Westminster, London. He is a Founder and Editor-in-Chief of Journal of Visual Culture.