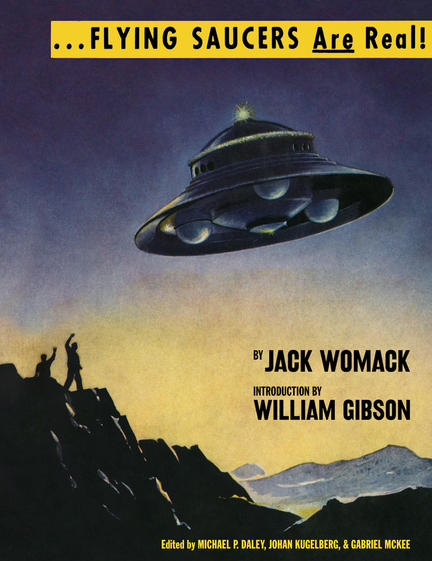 Flying Saucers Are Real! is a catalogue of the Jack Womack UFO library and a history of one of the 20th century’s most pervasive subcultures. The collection presents an unknown wealth of images taken from mid-century flying saucer books and extensive text by the author-collector outlining the history of the UFO phenomenon and opining on the selections. The book also features an introduction by science fiction author William Gibson.

"Jack Womack's fascinating research of flying saucers say more about human beings than visitors from beyond....Womack celebrates a plurality of beliefs overlapping, some competing, some desperate, but all of them - especially the tales of grey aliens - thoroughly human." Ryan Britt

In his 1956 book, 'The Report on Unidentified Flying Objects,' Edward J. Ruppelt, former head of Project Blue Book, examined all the evidence and concluded that further study of UFOs would be a complete waste of time. Oh, ye of little faith! The very existence of the Womack collection demonstrates incontrovertibly that UFOs are, if nothing else, the stuff that dreams are made of. Keep watching the skies! - The Washington Post

"Now it can be told. Life on this planet will never be exactly the same." - Jonathan Lethem, author of A Gambler's Anatomy and The Fortress of Solitude

"One man spent 40 years amassing the most comprehensive - and strangely beautiful collection of UFO books around. And now he's sharing it with the world." - Sweet