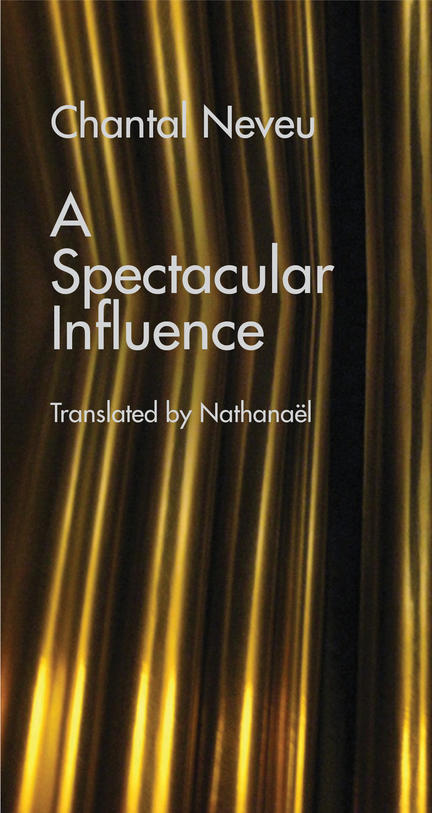 Because I have no voice anymore what I say has no air. Did I strangle you? I killed you to let the wind in.

Chantal Neveu's A Spectacular Influence inclines bodies and worlds, registering their turn as atomized events. This semantic partition distributed into four parts that decline the body's perplexity before the real, inscribes an intimate range of material probabilities and improbabilities.

Written in spare lines and minimalist language, A Spectacular Influence attends to the sensation of motional inertia and celebrates the relational in the human collective experience.

In a graceful, rich translation by acclaimed author and translator Nathanaï??l, A Spectacular Influence confirms Neveu's poetic range and extends the elegant musicality of her earlier choreographic poem, Coï??t.

"In this book, magnificent with density, the most external events are retranslated into intimate events. The writing produces effects of counterpoint that seem to layer several melodic lines that are tied one to the other. And it is there, in that musical space, that the body is exposed: something arises that changes it, jars it, modulates it, brings about a state or a motion that is the sign of life beating." --Alexis Lussier, Spirale magazine

"[Une spectaculaire influence] traverses the question of the representation and the place of the body in the midst of the fluctuating settings that surround us." -Nicolas Tardy, Cahier Critique de Poï??sie

Nathanaël is the author of more than a score of books written in English or in French, including Je Nathanaël (2018); Pasolini's Our (2018); Feder (2016); Sotto l'immagine (2014) and Sisyphus, Outdone: Theatres of the Catastrophal (2012). The French-language notebooks, Carnet de désaccords (2009), Carnet de délibérations (2011), and Carnet de somme (2012) were recast in English in a single volume as The Middle Notebookes (2015), which received the inaugural Publishing Triangle Award for Trans and Gender-Variant Literature.The essay of correspondence, Absence Where As (Claude Cahun and the Unopened Book) (2009) was first published in French as L'absence au lieu (2007). Nathanaël's work has been translated into Basque, Greek, Slovene, and Spanish (Mexico), with book-length publications in Bulgarian and Portuguese (Brazil). The recipient of the Prix Alain-Grandbois for ...s'arrête? Je (2008), Nathanaël's translations include works by Édouard Glissant, Catherine Mavrikakis, and Hilda Hilst (the latter in collaboration with Rachel Gontijo Araújo). Nathanaël's translation of Murder by Danielle Collobert was a finalist for a Best Translated Book Award in 2014. Her translation of The Mausoleum of Lovers by Hervé Guibert has been recognized by fellowships from the PEN American Center and the Centre National du Livre de France. Nathanaël lives in Chicago.

Other titles by Nathanaël