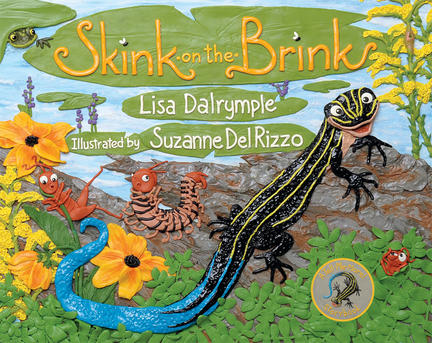 Lisa Dalrymple lives in Fergus Ontario with her husband and their three children. She has written other books for Creative, including If It’s No Trouble… A Big Polar Bear and Bubbly Troubly Polar Bear. Her picture book, Skink on the Brink, was a Starred Selection in Best Books for Kids and Teens, Fall 2013 and it won the 2011 Writing for Children Award of The Writers’ Union of Canada.

David Sturge is a graphic designer and illustrator who was born and raised in St. John's, Newfoundland where he currently resides. He studied commercial art and graphic design at The College of The North Atlantic. David has previously illustrated, On Poppy’s Beach (Creative, 2013).

Suzanne Del Rizzo has always loved getting her hands messy. She traded her job in scientific research for a career in children’s illustration with her first picture book, Skink on the Brink, which won the SCBWI Crystal Kite Award and was a finalist for the Rainforest of Reading Award. Suzanne’s dimensional illustrations use Plasticine, polymer clay, and other mixed media to bring rich texture and imagination to her books. In 2015, looking for resources to explain the Syrian Civil War to her own children, Suzanne came across an article of a boy who took solace in a connection with wild birds at the Za’atari refugee camp. Struck by the universality of a child’s relationship to animals, she began writing My Beautiful Birds. Her distinctive illustrations also grace Sun Dog, a winner of the IODE Jean Throop Book Award, and Before You Were Born, an acclaimed and touching celebration of new life. Suzanne lives in Oakville, Ontario.

"There is a strong message in this book for readers about loving oneself but also accepting that one will change as one grows up. This change does not make anyone less special, but one may have to look a little harder to find what his or her new special qualities and features are. The story is not overly didactic though; instead, it is a warm, realistic expression of how a young person might feel when facing change s/he did not necessarily expect. The plasticine illustrations in this book, in the style of Barbara Reid, are beautiful. In particular, the detail in them is impressive. They are a joy for adults and children alike to explore. "Skink on the Brink is a great book. The story and illustrations are rich and interesting, and the added information and activities at the back of the book enrich the experience of reading this book. It would be a good purchase for all libraries."
Highly Recommended. **** / 4
-- CM Magazine