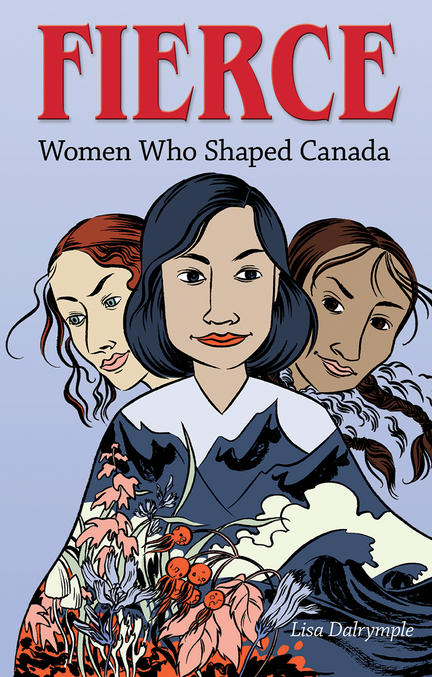 Discover the untold stories of the fierce women who shaped Canada's legacy!

Celebrate the accomplishments and heroics of the overlooked heroes of Canadian history, with inspiring tales of tenwomen who were integral to our national legacy, and whose stories have not been told . . . until now!

Often relegated to the sidelines of history, the women highlighted in this book were performed feats that most people would never even dream of. You may not know their names now, but after reading their stories, you won't soon forget them.

Author Lisa Dalrymple's riveting writing, combined with rigorous research, makes Fierce: Women Who Shaped Canada as eye-opening as it is thrilling to read!

Lisa Dalrymple lives in Fergus Ontario with her husband and their three children. She has written other books for Creative, including If It’s No Trouble… A Big Polar Bear and Bubbly Troubly Polar Bear. Her picture book, Skink on the Brink, was a Starred Selection in Best Books for Kids and Teens, Fall 2013 and it won the 2011 Writing for Children Award of The Writers’ Union of Canada.

David Sturge is a graphic designer and illustrator who was born and raised in St. John's, Newfoundland where he currently resides. He studied commercial art and graphic design at The College of The North Atlantic. David has previously illustrated, On Poppy’s Beach (Creative, 2013).

Award winning author and illustrator Willow Dawson’s books include Ghost Limb, Hyena In Petticoats, The Big Green Book of the Big Blue Sea with Helaine Becker, Lila and Ecco’s Do-It-Yourself Comics Club, No Girls Allowed with Susan Hughes, and the upcoming The Wolf-Birds. Her books have been supported by the Toronto Arts Council, the Ontario Arts Council and the Canada Council for the Arts. Willow Dawson also teaches Creating Comics and Graphic Novels at the University of Toronto’s School of Continuing Studies. She lives in Toronto.

Other titles by Lisa Dalrymple

Double Trouble at the Rooms

Skink on the Brink

Other titles by Willow Dawson

White as Milk, Red as Blood

Big Green Book of the Big Blue Sea, The

The Story Of Suffragette Nellie Mcclung

Tales of Daring Women Dressed as Men for Love, Freedom and Adventure

"And please don’t say these books are good for “girls.” Girls already KNOW what we can do. It’s everyone elsewho needs to be clonked over the head …

An excerpt from new book Fierce: Women Who Shaped Canada.