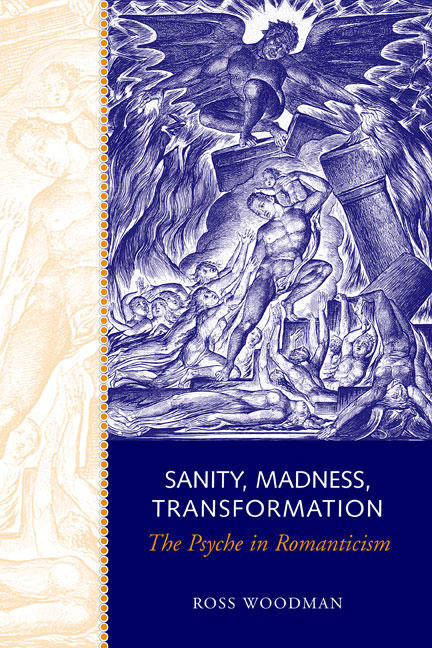 In Sanity, Madness, Transformation, Ross Woodman offers an extended reflection on the relationship between sanity and madness in Romantic literature. Woodman is one of the field’s most distinguished authorities on psychoanalysis and romanticism. Engaging with the works of Northrop Frye, Jacques Derrida, Sigmund Freud, and Carl Jung, he argues that madness is essential to the writings of William Blake, William Wordsworth, and Percy Shelley, and that it has been likewise fundamental to the emergence of the modern subject in psychoanalysis and literary theory. For Frye, madness threatens humanism, whereas for Derrida its relationship is more complex, and more productive. Both approaches are informed by Freudian and Jungian responses to the psyche, which, in turn, are drawn from an earlier Romantic ambivalence about madness.

This work, which began as a collection of Woodman’s essays assembled by colleague Joel Faflak, quickly evolved into a new book that approached Romanticism from an original psychoanalytic perspective by returning madness to its proper place in the creative psyche. Sanity, Madness, Transformation is a provocative hybrid of theory, literary criticism, and autobiography and is yet another decisive step in a distinguished academic career.

Ross Woodman, PhD, Professor Emeritus, Department of English, University of Western Ontario, is author of The Apocalyptic Vision in the Poetry of Shelley: Sanity, Madness, Transformation and Revelation and Knowledge, all with University of Toronto Press. He also authored Chambers, edited by Dennis Reid for Coach House Press and numerous articles on Canadian art and Romantic literature.

Joel Faflak is professor of English and Theory at Western University, where he was also the Inaugural Director of the School for Advanced Studies in the Arts and Humanities.

Other titles by Ross Woodman

The Psyche in Romanticism

Other titles by Joel Faflak

The Public Intellectual and the Culture of Hope

Confessions of an English Opium-Eater

The Psyche in Romanticism