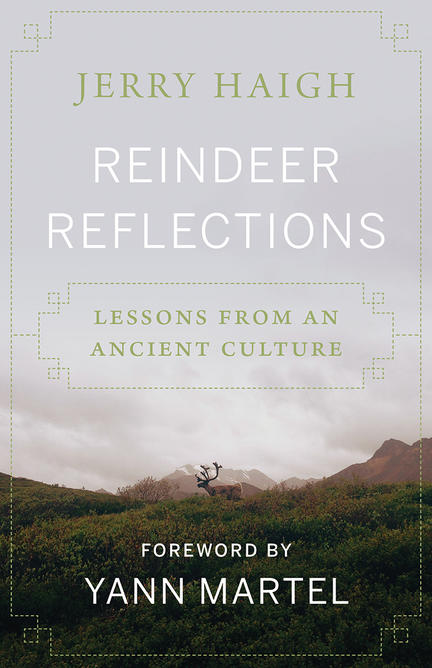 A fascinating look at the state and fate of caribou in North America, along with the millennia-long practice of reindeer herding in Finland, Russia, and Mongolia.

Within a few days of his arrival from Kenya to the western Canadian prairie city of Saskatoon, Saskatchewan, wildlife veterinarian Jerry Haigh discovered that caribou and reindeer are one and the same species: wild caribou in North America, wild reindeer in Eurasia.

In time, Jerry’s interest and research into this dynamic species grew beyond the borders of the northern boreal forests of North America, and he became fascinated with the way they were domesticated by ancient peoples and the folklore about the animals’ origins, including that of the modern Christmas story about Rudolph and his red nose.

Reindeer Reflections recounts Jerry Haigh’s travels and research in the arctic tundra and northern forests of North America, working among the Sami of Finland, and getting to know the nomadic Tsaatan herders in the foothills of the Sayan mountains of Mongolia. This decades-long journey to uncover how this unique species of deer has been woven into the lives of people scattered across the northern hemisphere examines the changes, mostly collapses, in population numbers of both wild and domestic caribou, along with the effects of climate change, poaching, and disease, from Alaska to Siberia, as well as the impact of COVID-19 on the lives of the people he has met along the way.

Dr. Jerry Haigh was born in Kenya and educated in Glasgow as a veterinarian. Upon graduation in Scotland, he moved back to Africa, where he lived and worked for over ten years. During his time in Africa he met his wife, Dr. Joanne van de Riet, with whom he has two children, Karen and Charles. In 1975 Jerry and his family moved from Kenya to Saskatoon, Saskatchewan, where he took up a post as a wildlife veterinarian at the University of Saskatchewan’s Western College of Veterinary Medicine. Jerry’s career-long experience with wildlife has spanned over five decades and four continents. He has worked on species ranging from elephants, to wild dogs and polar bears, to moose. He is the author of Of Moose and Men: A Wildlife Vet’s Pursuit of the World’s Largest Deer, The Trouble with Lions: A Glasgow Vet in Africa, Porcupines to Polar Bears: Adventures of a Wildlife Veterinarian, and Wrestling With Rhinos: The Adventures of a Glasgow Vet in Kenya. He and Joanne, together for over 50 years now, live near Saskatoon, Saskatchewan.

“Haigh has written a real winner: wonderful storytelling, wry humour, and tasty educational tidbits. This book is jammed with the kind of ‘so that’s how they do it’ detail that’ll keep you reading right to the end.”
—Arthur Slade, author of 25 novels, including The Hunchback Assignments (TD Canadian Children’s Literature Award) and Dust (Governor General’s Award for Children’s Literature)

“Master storyteller Jerry Haigh has had adventures so unique most of us could never imagine them. On the stage, at a kitchen table, or in the pages of this book, the details of his journeys transport us to another place and time, connecting us with one another in this wild and incredible world we call home. I’ve been listening to Jerry’s stories and reading his books for more than a decade and still haven’t heard it all!”
—Danica Lorer, author, storyteller, slam poet and host of Shaw TV’s Lit Happens

“Reminiscent of the great adventures of Farley Mowat, this travelogue is written in spare, crystalline prose with a great deal of description and momentum. Using the reindeer as metaphor, the author provides many wonderful insights into the cultural differences between several nations, including Finland, Mongolia, Kenya and Canada, and man’s relationship with nature.”
—John V. Hicks Long Manuscript Award jury, Saskatchewan Writers’ Guild

“The book takes the reader on a vivid voyage to fascinating places with a warm-hearted, jovial companion. It is also greatly educative, summing up different reindeer cultures and their current challenges, the similarities and differences of the animals, developments, and threads between reindeer habitats all over the world. Not only reindeer species but also the ancient cultures and livelihoods intertwined with these beautiful animals are struggling to survive all over the northern hemisphere. Although the message is serious, we still have hope, and the struggle continues. I truly enjoyed the reading.”
—Anne Ollila, executive director, Reindeer Herders’ Association of Finland

“Jerry Haigh is one of those rare authors – a scientist who is an enthralling storyteller. Like all his books, Reindeer Reflections is packed with fascinating information about the animal world and shrewd, humorous insights into the people who live off it and those, like him, who study it. An absorbing look at nature and culture.”
—Robert Calder, professor of 20th-century British literature; author of, among many others, Willie: The Life of W. Somerset Maugham (Governor General’s Award for English-language Non-fiction)

“Reading Jerry Haigh’s tales is second only to listening to this ultimate storyteller spin one in person. For those not having had the pleasure of the latter, take the opportunity of Reindeer Reflections to be warmed and informed.”
—Dr. William B. Karesh, executive vice-president, EcoHealth Alliance

“Haigh’s Reindeer Reflections brings together good science, saddle-sores, adventure, politics, culture, history, and wildlife medicine. This is the life of an animal healer who has fully lived his vocation, and not merely observed his professional duties. Brew a pot of tea. Make yourself comfortable on the rug by the fireplace. Enjoy.”
—Prof. David Waltner-Toews, founder and CEO of Veterinarians Without Borders

“Jerry Haigh is a distinguished veterinarian from Scotland who has turned his attentions to reindeer. One of the memorable adventures entailed trekking by foot and astride a pony to work with the Tsataan reindeer herders in Mongolia. This book promises to provide fascinating reading and a rich seam of information, plus all you need to know about Santa Claus.
—Dr. John Fletcher, past president of the British Deer Farmers Association

“Jerry Haigh’s depth of knowledge and vast personal experience as a wildlife veterinarian shines in Reindeer Reflections. Filled with compelling, thorough research, touches of humour, biographical anecdotes, and photographs, he takes the reader on an enjoyable journey into the world of reindeer past and present and into the fascinating culture of the Mongolian reindeer herders. In sharing his passion for wildlife and his work, Haigh has created a lively, entertaining, and valuable resource well worth a read for everyone.”
—Judith Silverstone, multiple award-winning author and former executive director of the Saskatchewan Writers Guild

“Reindeer Reflections, by veterinarian and adventurer Jerry Haigh, is an invitation to accompany the author on a series of revelatory cultural expeditions as he uncovers and investigates the impacts of natural evolution, disease, predation, and our modern world on caribou/reindeer populations and domestic reindeer herding cultures. From suffering the effects of a bad meal of tsuivan, to making an unlikely connection between marmots and cowpox, and sleeping in yurts, this is a passionate, educational, colourfully recounted tale that no one but Dr. Haigh could tell.”
—Anthony Bidulka, award-winning author of mystery, suspense, and thriller novels, including Amuse Bouche, Aloha, Candy Hearts, Set Free and many others, including the forthcoming Going to Beautiful

“I thoroughly enjoyed reading about Dr. Jerry Haigh’s adventures in remote places studying and caring for reindeer (caribou), and learning about the cultures of the various ‘people of the reindeer’, all told in his engaging and congenial voice. His endless curiosity and gusto for life are infectious and carry the reader along. From myth, to folklore, to veterinary medicine, who knew reindeer/caribou lore could be so fascinating?”
—Sharon Butala, Officer of the Order of Canada, inductee into the Saskatchewan Order of Merit, multiple award winner, honorary doctorate of letters, author of many novels and works of non-fiction.

Other titles by Jerry Haigh

Adventures of a Wildlife Veterinarian

The Trouble with Lions

A Glasgow Vet in Africa

Of Moose and Men

A Wildlife Vet's Pursuit of the World's Largest Deer

The Adventures of a Glasgow Vet in Kenya