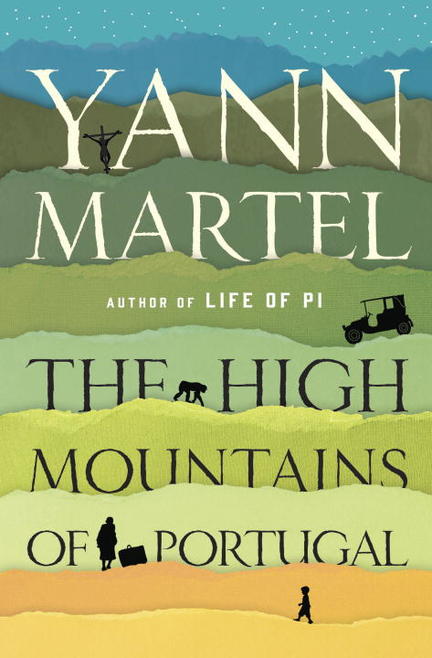 With this highly anticipated new novel, the author of the bestselling Life of Pi returns to the storytelling power and luminous wisdom of his master novel.
The High Mountains of Portugal is a suspenseful, mesmerizing story of a great quest for meaning, told in three intersecting narratives touching the lives of three different people and their families, and taking us on an extraordinary journey through the last century. We begin in the early 1900s, when Tomás discovers an ancient journal and sets out from Lisbon in one of the very first motor cars in Portugal in search of the strange treasure the journal describes. Thirty-five years later, a pathologist devoted to the novels of Agatha Christie, whose wife has possibly been murdered, finds himself drawn into the consequences of Tomás's quest. Fifty years later, Senator Peter Tovy of Ottawa, grieving the death of his own beloved wife, rescues a chimpanzee from an Oklahoma research facility and takes it to live with him in his ancestral village in northern Portugal, where the strands of all three stories miraculously mesh together.
Beautiful, witty and engaging, Yann Martel's new novel offers us the same tender exploration of the impact and significance of great love and great loss, belief and unbelief, that has marked all his brilliant, unexpected novels.

Shortlisted for 2017 Saskatchewan Book Awards: Regina Public Library Book of the Year Award, Muslims for Peace and Justice Fiction Award and City of Saskatoon and Public Library Saskatoon Book Award
INTERNATIONAL BESTSELLER
#1 NATIONAL BESTSELLER
“The High Mountains of Portugal, not just a story about home but about how home is a story and not a place, falls solidly on the hit side. . . . [A] remarkable novel.” —Maclean’s
“[A] wonderfully inventive, twentieth-century-spanning odyssey that contains some of the finest writing of Martel’s career.” —Mark Medley, The Globe and Mail
“Beautiful, witty and engaging, Yann Martel’s new novel offers us the same tender exploration of the impact and significance of great love and great loss, belief and unbelief, that has marked all his brilliant, unexpected novels.” —The Gazette
“Martel’s storytelling is fabulous, both literally—he blurs real worlds and dream worlds, human lives and lives of other animals—and figuratively. He lights up the page.” —Barbara J. King, NPR

“The High Mountains of Portugal is a deftly crafted and rewarding read. . . . The doctor in part two speaks of ‘writers who play the language like a mandolin for our entertainment.’ Martel plays it so well.” —Ottawa Citizen

“Captivated and surprised from the first sentence, I could not put this new novel from Yann Martel aside. Billed as a story of great love and great loss, it is all that and more. The High Mountains of Portugal is clever and poetic, laugh-out-loud funny and alive with images and ideas. Rush out and buy this book.” —Ottawa Magazine
“Lucid and thought provoking.” —Mail on Sunday
“Martel constructs a complicated story that is fascinating, frustrating and, in the end, a brilliant achievement. . . . The High Mountains of Portugal is as deeply sad as it is dryly funny, exploring love and faith in unexpected and memorable ways.” —St. Louis Post-Dispatch
“Yann Martel is like a skilled dancer. He leads readers with a strong hand, gliding them through the landscape of his imagination, page by page. . . . The High Mountains of Portugal is another tour de force, exemplifying the power of fiction, allegory and bold creativity. . . . [Martel’s characters] will live in the reader’s mind long after the book itself begins collecting dust. . . . [A] wonderful dance.” —Anne Watson, National Observer
“[A] strange and wonderful novel—and [its] pieces come together in a masterful ending, the kind that sends you back to the start to begin all over again. Martel most definitely has his quirks. There are some odd turns of phrase in The High Mountains. . . . But the exuberant wordplay enhances the equally vivid storytelling. I took away indelible images from High Mountains, enchanting and disturbing at the same time. . . . As whimsical as Martel’s magic realism can be, grief informs every step of the book’s three journeys. In the course of the novel we burrow ever further into the heart of an ape, pure and threatening at once, our precursor, ourselves.” —Jean Zimmerman, NPR

“[E]ntirely fresh. . . . Martel’s writing has never been more charming, a rich mixture of sweetness that’s not cloying and tragedy that’s not melodramatic. . . . The High Mountains of Portugal attains an altitude from which we can see something quietly miraculous.” —Ron Charles, The Washington Post
“[E]xquisite and beguiling. . . . The structure of the book embodies its gentle whimsy. . . . Martel explores the nature of grief in a manner that is delicate, subtle and unexpected. This is a rich vein in his writing; it is explored wonderfully in stories such as The Facts Behind the Helsinki Roccamatios. Martel’s work is a bit like the ocean on a nice day. The surface of his prose presents a calm and glistening exterior, allowing gentle waves to tickle your toes and often make you laugh. But there is a lot going on beneath the surface. The High Mountains of Portugal is a delightful and enlivening experience. Its very strangeness makes the world feel more comfortable.” —The Sydney Morning Herald

The Facts Behind the Helsinki Roccamatios