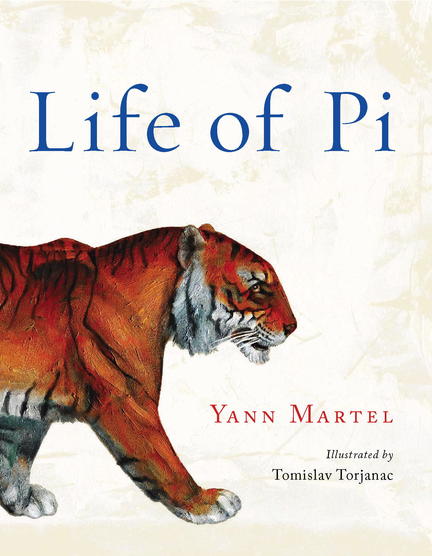 In October 2005 a worldwide competition was launched to find an artist to illustrate Yann Martel’s international bestseller. Media partners included The Globe and Mail in Canada, The Times in the UK and The Age in Australia, with an international panel of judges that included Canadians Martin Levin, Books Editor of The Globe and Mail, Executive Publisher Louise Dennys and Random House of Canada Creative Director C.S. Richardson. From thousands of entries, Croatian artist Tomislav Torjanac was chosen as the illustrator for this new edition of Life of Pi.

My suffering left me sad and gloomy.

Academic study and the steady, mindful practice of religion slowly brought me back to life. I have remained a faithful Hindu, Christian and Muslim. I decided to stay in Toronto. After one year of high school, I attended the University of Toronto and took a double-major Bachelor’s degree. My majors were religious studies and zoology. My fourth-year thesis for religious studies concerned certain aspects of the cosmogony theory of Isaac Luria, the great sixteenth-century Kabbalist from Safed. My zoology thesis was a functional analysis of the thyroid gland of the three-toed sloth. I chose the sloth because its demeanour — calm, quiet and introspective — did something to soothe my shattered self.

There are two-toed sloths and there are three-toed sloths, the case being determined by the forepaws of the animals, since all sloths have three claws on their hind paws. I had the great luck one summer of studying the three-toed sloth in situ in the equatorial jungles of Brazil. It is a highly intriguing creature. Its only real habit is indolence. It sleeps or rests on average twenty hours a day. Our team tested the sleep habits of five wild three-toed sloths by placing on their heads, in the early evening after they had fallen asleep, bright red plastic dishes filled with water. We found them still in place late the next morning, the water of the dishes swarming with insects. The sloth is at its busiest at sunset, using the word busy here in a most relaxed sense. It moves along the bough of a tree in its characteristic upside-down position at the speed of roughly 400 metres an hour. On the ground, it crawls to its next tree at the rate of 250 metres an hour, when motivated, which is 440 times slower than a motivated cheetah. Unmotivated, it covers four to five metres in an hour.

The three-toed sloth is not well informed about the outside world. On a scale of 2 to 10, where 2 represents unusual dullness and 10 extreme acuity, Beebe (1926) gave the sloth’s senses of taste, touch, sight and hearing a rating of 2, and its sense of smell a rating of 3. If you come upon a sleeping three-toed sloth in the wild, two or three nudges should suffice to awaken it; it will then look sleepily in every direction but yours. Why it should look about is uncertain since the sloth sees everything in a Magoo-like blur. As for hearing, the sloth is not so much deaf as uninterested in sound. Beebe reported that firing guns next to sleeping or feeding sloths elicited little reaction. And the sloth’s slightly better sense of smell should not be overestimated. They are said to be able to sniff and avoid decayed branches, but Bullock (1968) reported that sloths fall to the ground clinging to decayed branches “often”.

Precisely by being so slow. Sleepiness and slothfulness keep it out of harm’s way, away from the notice of jaguars, ocelots, harpy eagles and anacondas. A sloth’s hairs shelter an algae that is brown during the dry season and green during the wet season, so the animal blends in with the surrounding moss and foliage and looks like a nest of white ants or of squirrels, or like nothing at all but part of a tree.

The three-toed sloth lives a peaceful, vegetarian life in perfect harmony with its environment. “A good-natured smile is forever on its lips,” reported Tirler (1966). I have seen that smile with my own eyes. I am not one given to projecting human traits and emotions onto animals, but many a time during that month in Brazil, looking up at sloths in repose, I felt I was in the presence of upside-down yogis deep in meditation or hermits deep in prayer, wise beings whose intense imaginative lives were beyond the reach of my scientific probing.

I never had problems with my fellow scientists. Scientists are a friendly, atheistic, hard-working, beer-drinking lot whose minds are preoccupied with sex, chess and baseball when they are not preoccupied with science.

I was a very good student, if I may say so myself. I was tops at St. Michael’s College four years in a row. I got every possible student award from the Department of Zoology. If I got none from the Department of Religious Studies, it is simply because there are no student awards in this department (the rewards of religious study are not in mortal hands, we all know that). I would have received the Governor General’s Academic Medal, the University of Toronto’s highest undergraduate award, of which no small number of illustrious Canadians have been recipients, were it not for a beef-eating pink boy with a neck like a tree trunk and a temperament of unbearable good cheer.

I still smart a little at the slight. When you’ve suffered a great deal in life, each additional pain is both unbearable and trifling. My life is like a memento mori painting from European art: there is always a grinning skull at my side to remind me of the folly of human ambition. I mock this skull. I look at it and I say, “You’ve got the wrong fellow. You may not believe in life, but I don’t believe in death. Move on!” The skull snickers and moves ever closer, but that doesn’t surprise me. The reason death sticks so closely to life isn’t biological necessity–it’s envy. Life is so beautiful that death has fallen in love with it, a jealous, possessive love that grabs at what it can. But life leaps over oblivion lightly, losing only a thing or two of no importance, and gloom is but the passing shadow of a cloud. The pink boy also got the nod from the Rhodes Scholarship committee. I love him and I hope his time at Oxford was a rich experience. If Lakshmi, goddess of wealth, one day favours me bountifully, Oxford is fifth on the list of cities I would like to visit before I pass on, after Mecca, Varanasi, Jerusalem and Paris.

"Life of Pi…is about many things — religion, zoology, fear — but most of all, it’s about sheer tenacity. Martel has created a funny, wise and highliy original look at what it means to be human."
—Chatelaine
"In the end, Life of Pi may not, as its teller promises, persuade readers to believe in God, but it makes a fine argument for the divinity of good art."
—Noel Rieder, The Gazette (Montreal)

"In many ways, Life of Pi is a good old-fashioned boy’s book full of survival, cannibalism, horror, math and zoology. An impressive marriage of The Jungle Book with Lord of the Flies, it’s the harrowing coming of age tale of a boy who survives for over a year in a lifeboat with a zebra, an organgutan, an hyena and a Bengal tiger."
—The Montreal Mirror
"A good story can make you see, understand and believe, and Martel is a very good storyteller. Martel displays an impresive knowledge of language, history, religion and literature, and his writing is filled with details and insights."
—The Canadian Press
"[Life of Pi] has a buoyant, exotic, insistence reminiscent of Edgar Allen Poe’s most Gothic fiction…Oddities abound and the storytelling is first-rate. Yann Martel has written a novel full of grisly reality, outlandish plot, inventive setting and thought-provoking questions about the value and purpose of fiction. This novel should float."
—The Edmonton Journal
"I guarantee that you will not be able to put this book down. It is a realistic, gripping story of survival at sea. On one level, the book is a suspenseful adventure story, a demonstration of how extreme need alters a man’s character…. On another level, this is a profound meditation on the role of religion in human life and the nature of animals, wild and human. His language…is vivid and striking. His imagination if powerful, his range enormous, his capacity for persuasion almost limitless. I predict that Yann Martel will develop into one of Canada’s great writers."
—The Hamilton Spectator
"[M]artel’s writing is so original you might think he wants you to read as if, like a perfect snowflake, no other book had ever had this form…. In Pi one gleans that faith — one of the most ephemeral emotions, yet crucial whenever life is one the line — is rooted in the will to live. In any event, when Pi does come to the end of his journey, he has it.
—National Post
"[A]stounding and beautiful…The book is a pleasure not only for the subtleties of its philosophy but also for its ingenious and surprising story. Martel is a confident, heartfelt artist, and his imagination is cared for in a writing style that is both unmistakable and marvelously reserved. The ending of Life of Pi…is a show of such sophisticated genius that I could scarcely keep my eyes in my head as I read it."
— The Vancouver Sun