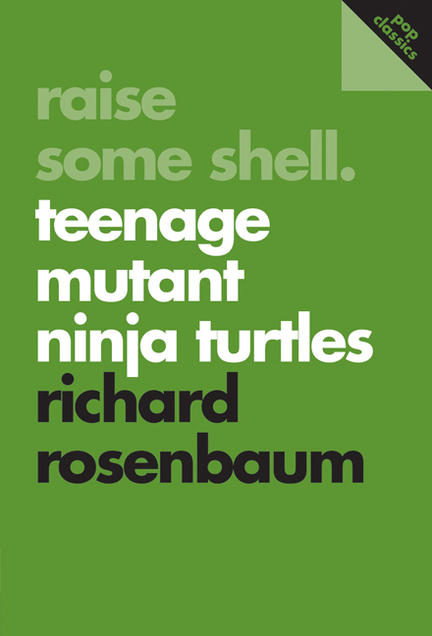 Celebrating the persistence of Turtle Power

Raise Some Shell critically and cleverly examines the origins, evolution, and impact of the Ninja Turtles phenomenon — from its beginning as a self-published black-and-white comic book in 1984, through its transformation into a worldwide transmedia phenomenon by the middle of the 1990s, and up to the sale of the property to Nickelodeon in 2009 and relaunch of the Turtles with new comics, cartoons, and a big-budget Hollywood film. With the eye of contemporary cultural studies and the voice of a true lifelong Turtles fan, Rosenbaum argues that the Turtles’ continuing success isn’t mere nostalgia, but rather the result of characters, and a franchise, that mutated in a way that allowed the to survive and thrive in a post-modern world.

Richard Rosenbaum is a writer from Toronto. His fiction and non-fiction has appeared in numerous magazines, anthologies, and websites, including Canadian Notes & Queries, Descant, Joyland, FoundPress & Quarterly, Cell Stories, and Overthinking It. He is Fiction Editor for Broken Pencil and the author of Raise Some Shell, a book about Teenage Mutant Ninja Turtles.

“The second instalment in ECW’s new Pop Classics series does an excellent job contextualizing the origins of Leonardo, Donatello, Michelangelo and Raphael, following the trajectory of the various incarnations and permutations of their stories, and intelligently speculates upon their future . . . His analysis is intense yet refreshing, and always delivered with humour.” — National Post

“By successfully drawing comparisons to Kafka, Rushdie, and Marvel’s X-Men, Rosenbaum, like Nayman with Showgirls, is able to state his case for the continued social relevance of the Teenage Mutant Ninja Turtles unapologetically and without a shred of irony.” — Quill & Quire

"The highest praise I can give to Richard Rosenbaum is that while his book is quite educational and smartly written he does so in an enormously humorous style, during my first read through I just kept imagining the author and I sitting at a restaurant just chatting about characters that we loved very much." — The Retroist

"Raise Some Shell is a breath of fresh air as a substantial, accessible discussion of a major trend in pop culture." — BleedingCool.com

"It wasn't okay, it was AWESOME! And that's saying something for a book about the world of comics, cartoons and movies that contains zero pictures...Without a doubt my favourite part of this book is the non-stop ride of Nostalgia as well as the countless times I learned facts that completely blew my mind." — The Nostalgia Blog

Other titles by Richard Rosenbaum

Revenge of the Grand Narrative

Nearly one week until Christmas! Here's hoping we can hook up your loved ones with the perfect present.