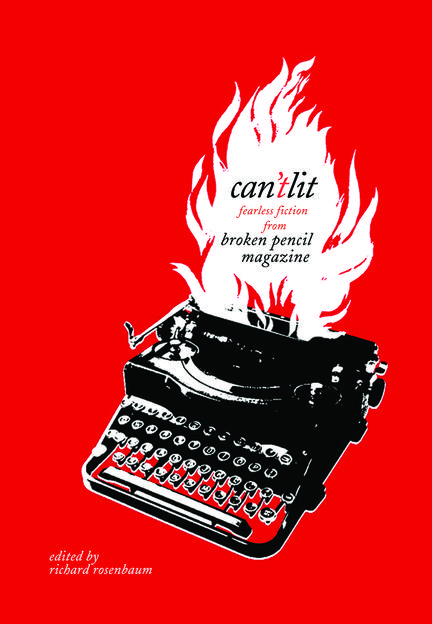 In 1995, Canadian novelist and critic Hal Niedviecki started publishing Broken Pencil, a magazine dedicated to the zine scene, the independent and alternative arts community that had been boiling below the surface of Canada's culture. Broken Pencil's mandate was (and is) to bring the submerged cultural urge into Canada's collective consciousness, to help lift it up and lend it legitimacy. And this includes promoting writing, from writers within Canada and outside it whom nobody here had ever heard of or wouldn't touch, that was too weird or uncomfortable for the (all-too) serious literary journals, too visceral and punk rock for the likes of the Margarets and their ilk.

The stories in this anthology are outcasts. They don’t fit into traditional CanLit and, in most cases, they don’t even resemble the contemporary short story we’ve come to know and love. They are anti-literature. By and large, they read ragged, lacking the refinements of metaphor, magical realism, and perfect epiphany on the prairies. A few of them might even be badly written. On purpose? By accident? Who really cares? This is Broken Pencil, where the words do the work, voices are discovered and developed, and the place for sharp, offensive urban fiction.

Richard Rosenbaum is a writer from Toronto. His fiction and non-fiction has appeared in numerous magazines, anthologies, and websites, including Canadian Notes & Queries, Descant, Joyland, FoundPress & Quarterly, Cell Stories, and Overthinking It. He is Fiction Editor for Broken Pencil and the author of Raise Some Shell, a book about Teenage Mutant Ninja Turtles.

“There’s angst in these stories, but there’s playfulness too . . . Can’t Lit makes it clear that there is no dearth of Canadian writers willing to push the boundaries of what words can do. Broken Pencil and ECW Press: for championing the weird, the uncomfortable, the unknown, and the obscure, and all on green paper, I want to buy you a large alcoholic beverage each.” — Brown Paper

"The term ‘CanLit’ is now culturally enshrined as shorthand for all that is established and orthodox (or boring and stuffy) in Canadian fiction. The anthology CantLit sets itself in strong opposition to this orthodoxy . . . Many of the stories are very good . . . fun and free-spirited." — Quill & Quire

Other titles by Richard Rosenbaum

Revenge of the Grand Narrative