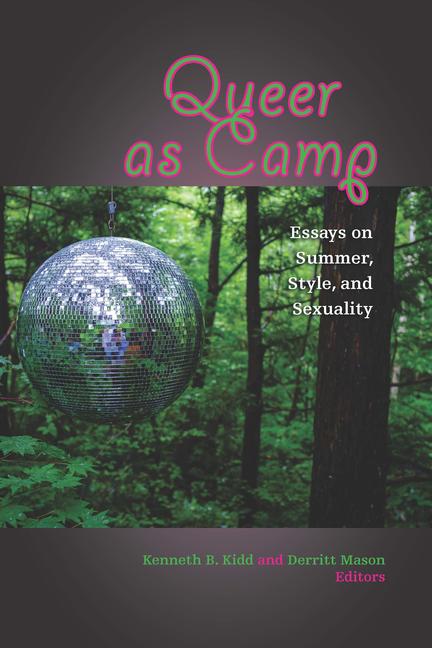 Named the #1 Bestselling Non-Fiction Title by the Calgary Herald
To camp means to occupy a place and/or time provisionally or under special circumstances. To camp can also mean to queer. And for many children and young adults, summer camp is a formative experience mixed with homosocial structure and homoerotic longing. In Queer as Camp, editors Kenneth B. Kidd and Derritt Mason curate a collection of essays and critical memoirs exploring the intersections of “queer” and “camp,” focusing especially on camp as an alternative and potentially nonnormative place and/or time.
Exploring questions of identity, desire, and social formation, Queer as Camp delves into the diverse and queer-enabling dimensions of particular camp/sites, from traditional iterations of camp to camp-like ventures, literary and filmic texts about camp across a range of genres (fantasy, horror, realistic fiction, graphic novels), as well as the notorious appropriation of Indigenous life and the consequences of “playing Indian.”
These accessible, engaging essays examine, variously, camp as a queer place and/or the experiences of queers at camp, including Vermont’s Indian Brook, a single-sex girls’ camp that has struggled with the inclusion of nonbinary and transgender campers and staff; the role of Jewish summer camp as a complicated site of sexuality, social bonding, and citizen-making as well as a potentially if not routinely queer-affirming place. They also attend to cinematic and literary representations of camp, such as the Eisner award-winning comic series Lumberjanes, which revitalizes and revises the century-old Girl Scout story; Disney’s Paul Bunyan, a short film that plays up male homosociality and cross-species bonding while inviting queer identification in the process; Sleepaway Camp, a horror film that exposes and deconstructs anxieties about the gendered body; and Wes Anderson’s critically acclaimed Moonrise Kingdom, which evokes dreams of escape, transformation, and other ways of being in the world.
Highly interdisciplinary in scope, Queer as Camp reflects on camp and Camp with candor, insight, and often humor.
Contributors: Kyle Eveleth, D. Gilson, Charlie Hailey, Ana M. Jimenez-Moreno, Kathryn R. Kent, Mark Lipton, Kerry Mallan, Chris McGee, Roderick McGillis, Tammy Mielke, Alexis Mitchell, Flavia Musinsky, Daniel Mallory Ortberg, Annebella Pollen, Andrew J. Trevarrow, Paul Venzo, Joshua Whitehead

Kenneth B. Kidd is Professor of English at the University of Florida. He is the author of Making American Boys: Boyology and the Feral Tale and Freud in Oz: At the Intersections of Psychoanalysis and Children’s Literature. He is also co-editor (with Derrit Mason) of Queer as Camp: Essays on Summer, Style, and Sexuality (Fordham).

Derritt Mason is associate professor of English at the University of Calgary. He is coeditor of Queer as Camp: Essays on Summer, Style, and Sexuality.

Kyle Eveleth is a Ronald E. McNair Postbaccalaureate Fellow and doctoral candidate at the University of Kentucky, where he specializes in twentieth- and twenty-first-century American literature, children’s/young adult literature, and visual narrative. He has published on comics and narrative in Critical Insights: The American Comic Book, Critical Insights: Neil Gaiman, disClosure: A Journal of Social Theory, and The South Central Review. With Joseph Michael Sommers he is co- editor of The Artistry of Neil Gaiman: Finding Light in the Shadows.

Kathryn R. Kent is Professor of English and Women’s, Gender and Sexuality Studies at Williams College. Her chapter is part of a book-length project on sexuality and summer camp. Her recent publications include “Eve’s Muse” in Bathroom Songs: Eve Kosofksy Sedgwick as Poet, ed. Jason Edwards, which is an excerpt from her book- in- progress, an experimental biography of Eve Kosofsky Sedgwick.

D. Gilson is the author of Jesus Freak (2018), I Will Say This Exactly One Time: Essays (2015), Crush with Will Stockton (2014), and Brit Lit (2013). He is an Assistant Professor of English at Texas Tech University, and his work has appeared in Quarterly Review of Film and Video, Journal of Popular Culture, and as a notable essay in Best American Essays.

Charlie Hailey is Professor of Architecture at the University of Florida. A registered architect and 2018 Guggenheim Fellow, Charlie is the author of Design /Build with Jersey Devil (2016), Spoil Island: Reading the Makeshift Archipelago (2013), Camps: A Guide to 21st- Century Space (2009), Campsite: Architectures of Duration and Place (2008), and Slab City: Dispatches from the Last Free Place (with photographer Donovan Wylie, 2018).

Ana M. Jimenez- Moreno is a Postdoctoral Fellow at the University of Notre Dame. She received a B.A. from Rutgers University and an M.A. and Ph.D. in English from the University of Notre Dame. Her dissertation, Writing out of the Center: The Legacy of the Mexican Revolution on Interwar British Fiction, focuses on the connections between post- colonial theory, phenomenology, the novel genre, and travel literature. Her article “Disgust as Redemptive Articulation: British Interwar Writers in Mexico” was published in the interdisciplinary journal Atenea.

Mark Lipton is Professor in the School of English and Theatre Studies / Media Studies, University of Guelph. Lipton is the author of the media literacy textbook Smoke Screens: From Tobacco Outrage to Media Activism (with M. Dewing and Children’s Media Project, Children’s Health Initiative, 2002). He has written numerous monographs on the subject of communication, media, and education and is a coeditor of Visualizing the Web: Evaluating Online Design from A Visual Communication Perspective (2010), and author of Research, Write, Create: Connecting Scholarship to Digital Media (with T. Gibson, 2014). Research funding includes support from the Canadian Council on Learning, the Social Sciences and Humanities Research Council, the Mellon Foundation, the Ford Foundation, Children’s Services Council, United Way, and others.

Chris McGee teaches children’s literature, young adult literature, and film courses at Longwood University in Virginia. One of his primary areas of research and teaching is adolescent horror films, and his favorite movies are the eighties slasher films he’d watch at the local theaters with friends when he was a teenager. His other primary areas of interest are children’s and young adult mystery fiction, contemporary American series fiction, and popular children’s culture. He is currently at work on a manuscript on contemporary children’s and young adult detective fiction.

Roderick McGillis is a professor of English at the University of Calgary. He is the author of the award-winning The Nimble Reader (1996), A Little Princess: Gender and Empire (1996), and Les Pieds Devant (2007), and the editor of George MacDonald: Literary Heritage and Heirs (2007). He is a former editor of The Children’s Literature Association Quarterly, and former president of the Children’s Literature Association.

Kerry Mallan is Emeritus Professor, Faculty of Education, Queensland University of Technology, Australia. She has published widely on children’s literature and fi lm, with a special interest in gender and sexuality. Her books include Gender Dilemmas in Children’s Fiction (2009), Secrets, Lies and Children’s Fiction (2013), and (Re)Imagining the World: Children’s Literature’s Response to Changing Times, edited with Yan Wu and Roderick McGillis (2013). Her research also includes youth digital cultures and texts. A recent publication is Digital Participation through Social Living Labs, edited with Michael Dezuanni, Marcus Foth, and Hilary Hughes (2017).

Tammy L. Mielke lectures in the Honors program at Northern Arizona University, specializing in children’s and young adult literature. She taught elementary-age students for eleven years in areas with diverse populations. She researches the ways in which culture is reflected in literature.

Alexis Mitchell is an award- winning artist and scholar whose works have shown at galleries and festivals internationally, including the Berlinale Film Festival, Gallery TPW, the Art Gallery of Windsor, and the Images Festival. Her projects make use of space and place to reconfigure relationships to memory, politics, and acts of belonging. She often works collaboratively alongside artist Sharlene Bamboat under the name Bambitchell. Mitchell earned her Ph.D. in Human Geography from the University of Toronto where she held a SSHRC Doctoral Fellowship and is a fellow of the Sommerakademie Paul Klee through Spring 2019. She has held artist residencies at Akademie Schloss Solitude, the Santa Fe Art Institute, and the MacDowell Colony, and is featured in a wide range of publications, including the Los Angeles Review of Books, C Magazine, and the recently published book Contemporary Citizenship, Art and Visual Culture. www.alexismitchell.com

Flavia Musinsky is a nonprofit professional with over ten years of experience working for organizations dedicated to the advancement of women and girls. Currently, she is the Member Acquisition Specialist for Girl Scouts of the USA, and has previously worked with Girl Scouts of Western PA, Strong Women Strong Girls, the Eileen Fisher Leadership Institute, Farm & Wilderness Camps, and MADRE. She has an MBA from Chatham University and a B.A. in Sociology and Gender Studies from New College of Florida, where she wrote a senior thesis from which her chapter is excerpted.

Daniel Mallory Ortberg is an American writer, blogger, editor, and cofounder of the feminist website The Toast. Previously, he wrote for Gawker and The Hairpin. His book Texts from Jane Eyre (2014) became a New York Times bestseller.

Annebella Pollen is a social and cultural historian who researches art, craft, design, dress, and photography across a range of periods and case studies. She is Principal Lecturer in Art and Design History at the University of Brighton, UK, the author of The Kindred of the Kibbo Kift: Intellectual Barbarians (Donlon Books), which won a 2015 Swiss Federal Offi ce of Culture Most Beautiful Swiss Book award, and the co- curator of the accompanying 2015–2016 exhibition at Whitechapel Gallery, London. Her other books include Mass Photography: Collective Histories of Everyday Life (2015) and the co-edited collections Dress History: New Directions in Theory and Practice (2015) and Photography Reframed: New Visions in Contemporary Photographic Culture (2018).

Paul Venzo (Ph.D.) is a creative writer and academic working in Victoria, Australia. His research focuses on theories of in-between-ness, linguistic hybridity, and the poetics of identity. He has worked for more than a decade teaching child and young adult literature at tertiary level, and has published widely on translation, queer culture, and literary and popular media representations of children and young adults, as well as poetry and poetics. His recent creative work involves poetry-in-translation across English and Italian, in which he takes a contemporary flâneur’s approach to mapping the Self into cultural, imagined, and literary geographies.

Joshua Whitehead is an Oji-Cree/nehiyaw, Two-Spirit/Indigiqueer member of Peguis First Nation (Treaty 1). He is the author of the novel Jonny Appleseed (Arsenal Pulp Press, 2018), longlisted for the Scotiabank Giller Prize, and the poetry collection full-metal indigiqueer (Talonbooks, 2017) and the winner of the Governor General's History Award for the Indigenous Arts and Stories Challenge in 2016. He is also the editor of Love after the End: An Anthology of Two-Spirit and Indigiqueer Speculative Fiction, publishing in fall 2020. Currently he is working on a PhD in Indigenous Literatures and Cultures in the University of Calgary's English department (Treaty 7).

Other titles by Derritt Mason

Other titles by Mark Lipton

Other titles by Roderick McGillis

At the Back of the North Wind

He Was Some Kind of a Man

Masculinities in the B Western

Other titles by Alexis Mitchell

Digital Lives in the Global City

Other titles by Joshua Whitehead

Making Love with the Land

Love after the End

An Anthology of Two-Spirit and Indigiqueer Speculative Fiction

Love After the End