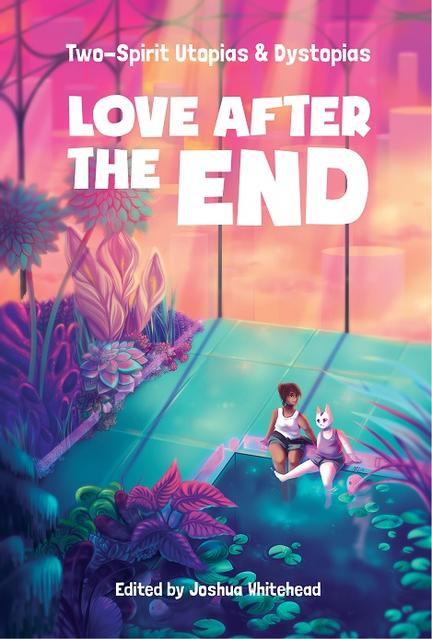 In this collection of stories, we showcase a variety of stories by Indigenous authors imagining different possible futures of our world, told through the lens of the 2SQ (Two-Spirit & queer) heroes in the lead roles.

You can expect stories of morally ambigious cyborg rats, civilizations overtaken by the promise of perfect virtual reality, tips for surviving the apocalypse, and survival after the end of the world.

Joshua Whitehead is an Oji-Cree/nehiyaw, Two-Spirit/Indigiqueer member of Peguis First Nation (Treaty 1). He is the author of the novel Jonny Appleseed (Arsenal Pulp Press, 2018), longlisted for the Scotiabank Giller Prize, and the poetry collection full-metal indigiqueer (Talonbooks, 2017) and the winner of the Governor General's History Award for the Indigenous Arts and Stories Challenge in 2016. He is also the editor of Love after the End: An Anthology of Two-Spirit and Indigiqueer Speculative Fiction, publishing in fall 2020. Currently he is working on a PhD in Indigenous Literatures and Cultures in the University of Calgary's English department (Treaty 7).

David A Robertson is a graphic novelist and writer who has long been an advocate for educating youth on indigenous history and contemporary issues. As a speaker, David has taken his message about social change across Canada. He has created several graphic novels, including his newest series, Tales From Big Spirit, as well as the bestselling 7 Generations series. He was a contributor to the anthology Manitowapow: Aboriginal Writings from the Land of Water (2012) and is currently the co-creator and writer for the upcoming television series The Reckoner. His first novel, The Evolution of Alice, will be published in fall 2014. David lives in Winnipeg with his wife and four children, where he works in the field of indigenous education.

Nathan Niigan Noodin Adler is the author of Wrist (Kegedonce Press), and co-editor of Bawaajigan ~ Stories of Power, a dream-themed anthology of Indigenous writers (Exile Editions). He is an artist and filmmaker who works in a variety of mediums including audio & video, and drawing & painting. Nathan is first-place winner of an Aboriginal Writing Challenge, and recipient of a Hnatyshyn Reveal award for literature, he has an MFA in Creative Writing (UBC), BFA in Integrated Media (OCAD), and BA in English Literature & Native Studies (Trent). His writing is published in various magazines, blogs, and anthologies. He is two-spirit, Jewish, Anishinaabe, and member of Lac Des Mille Lacs First Nation. Originally from Ontario, he currently resides in Vancouver.

Adam Garnet Jones is a Cree/Métis filmmaker whose work includes over twenty short films that have been broadcast on television and the big screen. He is best known for telling compelling personal stories that come from the Aboriginal and Queer communities. Fire Song is an adaptation of Adam’s award-winning feature film debut.

jaye simpson is a Two-Spirit Oji-Cree person of the Buffalo Clan with roots in Sapotaweyak and Skownan Cree Nation who often writes about being queer in the child welfare system, as well as being queer and Indigenous. simpson’s work has been performed at the Canadian Festival of Spoken Word (2017) in Peterborough, and in Guelph with the Vancouver Slam Poetry 2018 Team. simpson has recently been named the Vancouver Champion for the Women of the World Poetry Slam and their work has been featured in Poetry Is Dead, This Magazine, PRISM international, SAD Mag, GUTS Magazine and Room. simpson resides on the unceded and ancestral territories of the xwməθkwəy̓əm (Musqueam), səlilwəta’Ɂɬ (Tsleil-Waututh) and Sḵwx̱wú7mesh (Squamish) First Nations peoples, currently and colonially known as Vancouver, BC.

Other titles by Joshua Whitehead

Making Love with the Land

Love after the End

An Anthology of Two-Spirit and Indigiqueer Speculative Fiction

Essays on Summer, Style, and Sexuality

Other titles by David Alexander Robertson

by (author) David Alexander Robertson
illustrated by Scott B. Henderson

The Life of Helen Betty Osborne

Other titles by Mari Kurisato

Other titles by Darcie Little Badger

Other titles by Nathan Adler

Other titles by jaye simpson

it was never going to be okay

Other titles by Emily Stewart