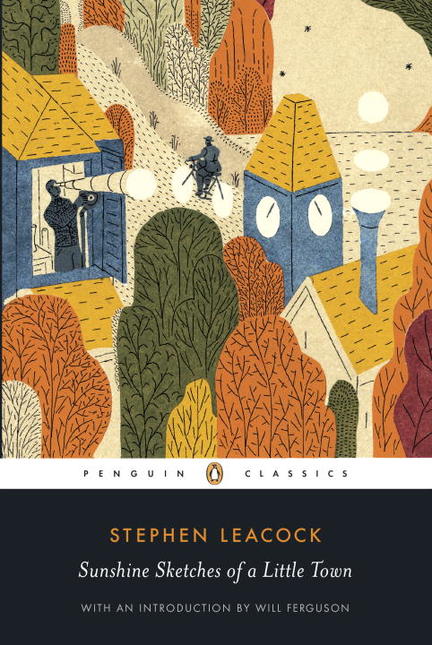 WITH AN INTRODUCTION BY WILL FERGUSON

Stephen Leacock was one of the bestselling English-language humorists in the world. Referred to as “The Canadian Mark Twain,” his most famous book was Sunshine Sketches of a Little Town, published in 1912.

Sunshine Sketches of a Little Town, which first appeared as a newspaper serial, chronicles life in the fictional community of Mariposa, modelled on Orillia, Ontario, where Leacock spent many summers. It’s a brilliant satire about small towns, small-town people, and small-town occurrences.

Life in Mariposa is never dull or ordinary. It’s a town full of eccentrics, where boats sent to rescue passengers from a sinking steamer have to be rescued themselves, where the leading citizen is a 280-pound illiterate saloonkeeper, and where a barber who stumbles into a fortune is heralded as a financial wizard.

Award-winning Canadian humorist and writer Stephen Leacock (1869-1944) was the author of more than 50 literary works, and between 1915 and 1925 was the most popular humorist in the English-speaking world. Leacock’s fictional works include classics like Sunshine Sketches of a Little Town, Arcadian Adventures with the Idle Rich, and Literary Lapses. In addition to his humor writings, Leacock was an accomplished political theorist, publishing such works as Elements of Political Science and My Discovery of the West: A Discussion of East and West in Canada, for which he won the Governor General's Award for writing in 1937. Leacock’s life continues to be commemorated through the awarding of the Leacock Medal for Humour and with an annual literary festival in his hometown of Orillia, Ontario.

Other titles by Stephen Leacock

Sunshine Sketches of a Little Town

The Awful Fate Of Melpomenus Jones

My Discovery Of The West

A Discussion of East and West in Canada

Moonbeams From The Larger Lunacy

Arcadian Adventures With The Idle Rich

Adventurers Of The Far North