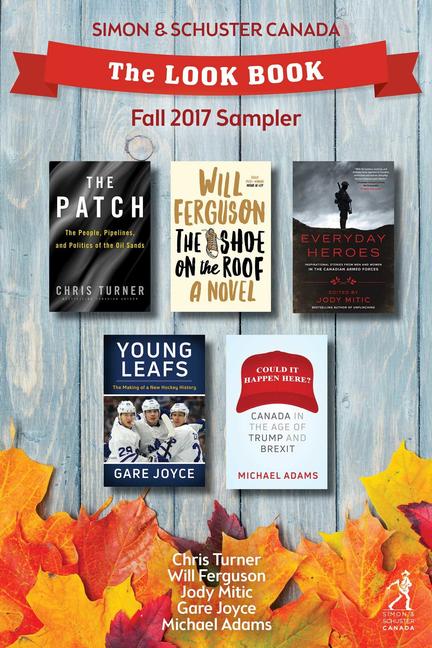 The Look Book offers a sample of groundbreaking and exciting new books on the Fall 2017 Simon & Schuster Canada list.

Dip into the latest masterwork from the winner of Canada’s top fiction prize. Hear stories from Canada’s courageous veterans. Consider the future of our country with an investigation into the oil sands and a look at the risks Canadians face in the wake of Brexit and Donald Trump. And because it’s not Fall in Canada without talking hockey, curl up with a book about our country’s most notable sports team.

With chapter excerpts from the following Fall 2017 new releases:

The Shoe on the Roof, by Will Ferguson
Everyday Heroes: Inspirational Stories from Men and Women in the Canadian Armed Forces, by Jody Mitic
The Patch: The People, Pipelines, and Politics of the Oil Sands, by Chris Turner
Could It Happen Here? Canada in the Age of Trump and Brexit, by Michael Adams
Young Leafs: The Making of a New Hockey History, by Gare Joyce

Look back, look around, and look forward.

Michael Adams is the founding president of the Environics group of research and communications consulting companies, and the author of six books on public attitudes and social values in Canada and the United States. He is a respected commentator on public affairs and the founder of the Environics Institute, a nonprofit organization that works collaboratively to conduct relevant and original research on issues of public importance in Canada. His most popular book to date, Fire and Ice: The United States, Canada and the Myth of Converging Values, won the Donner Prize for best book on Canadian public policy in 2004 and was named by the Literary Review of Canada as one of the 100 most important books ever published in Canada.

Chris Turner is one of Canada’s leading writers and speakers on sustainability and the global cleantech industry. He is also the author of the bestseller The Geography of Hope: A Tour of the World We Need (Random House), a Globe & Mail Best Book of the Year and a finalist for the Governor General’s Award for Nonfiction, the Alberta Literary Award for Nonfiction, and the National Business Book Award. Turner’s first book was the international bestseller Planet Simpson: How a Cartoon Masterpiece Documented an Era and Defined a Generation. His feature writing has earned seven National Magazine Awards. He lives in Calgary with his wife, the photographer Ashley Bristowe, and their two children. Connect with him on Twitter @TheTurner.

Jody Mitic is a twenty-year Canadian Armed Forces veteran and Sniper Team Leader. A sought-after motivational speaker, he is a respected advocate for wounded veterans, people with disabilities, and amputees. He founded the Never Quit Foundation and currently sits on the Board of Directors of Won with One, an organization devoted to helping physically challenged athletes realize their dreams. He currently serves on Ottawa City Council. Jody lives in Ottawa with his wife, Alannah, and two daughters, Aylah and Kierah. Currently, Jody is soliciting stories from Canadian veterans and active military personnel for a new book. If you have a story to share, visit CanadianSoldierStories.ca for more information on how to submit. Find Jody Mitic on Facebook and @JODYMITIC on Twitter.

Gare Joyce has written about sports for over thirty years, winning four National Magazine Awards and landing on The Best American Sports Writing notable list seven times. Joyce is the author of eleven books, including Sidney Crosby: Taking the Game by Storm and The Devil And Bobby Hull. He is a senior writer with Sportsnet and was previously a hockey columnist for The Globe and Mail and a staff feature writer for ESPN The Magazine and espn.com. Joyce lives in Toronto, seven subway stops from the Air Canada Centre.

Other titles by Michael Adams

Could It Happen Here?

Canada in the Age of Trump and Brexit

The United States Canada And The Myth Of Converging Values

The Surprising Triumph Of Canadian Multiculturalism

Sex in the Snow

Canadians, Money And The Meaning Of Life

Other titles by Chris Turner

How to Be a Climate Optimist

Blueprints for a Better World

The People, Pipelines, and Politics of the Oil Sands

How to Breathe Underwater

Field Reports from an Age of Radical Change

The War On Science

How to Survive and Thrive in the Sustainable Economy

Tales of Other Worlds

How a Cartoon Masterpiece Documented an Era and Defined a Generation

The Geography of Hope

A Tour of the World We Need

Other titles by Jody Mitic

Inspirational Stories from Men and Women in the Canadian Armed Forces

The Making of a Canadian Sniper

Other titles by Gare Joyce

How to Succeed in Sportswriting (Without Really Trying)

Every Spring a Parade Down Bay Street

The Making of a New Hockey History

The Making of a New Hockey History

The Devil And Bobby Hull

A Behind-the-Scenes Look at Hockey's Most Dangerous Player

Thirty Years Of Going For Gold At The World Juniors

King of the Racetrack