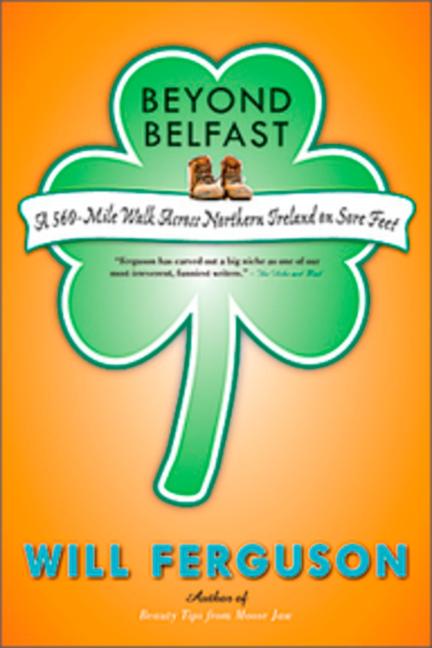 Offbeat, charming, and filled with humour and insight, Beyond Belfast is the story of one man’s misguided attempt at walking the Ulster Way, “the longest waymarked trail in the British Isles.” It’s a journey that takes Will Ferguson through the small towns and half-forgotten villages of Northern Ireland, along rugged coastlines and across barren moorland heights, past crumbling castles and patchwork farms.

From IRA pubs to Protestant marches, from bandits and bad weather to banshees and blood sausage, he wades into the thick of things, providing an affectionate and heartfelt look at one of the most misunderstood corners of the world. As the grandson of a Belfast orphan, Will also peels back the myths and realities of his own family history—a mysterious photograph, rumours of a lost inheritance. The truth, when it comes, is both surprising and funny …

“A smart, engaging travel memoir about sore feet, Northern Ireland and coming to terms with who you are and from where you came.” - Winnipeg Free Press

“His thoughts are informed by a fair amount of reading, a keen sense of observation and a humane disposition… funny, intelligent, and well worth hearing… Do not, under any circumstances, attempt to walk the Ulster Way. Instead, buy this book, take off your shoes and socks, sit down by a warm fire, pour yourself a glass of whisky, and walk with Will Ferguson, step by vicarious step.” - The Globe And Mail

“Travel at times can be no laughing matter. So it’s always a good idea to pack a book that is like, say, Beyond Belfast…. Great scenery, oddball characters and much hilarity ensue.” - The National Post

“A thoughtful travelogue chronicling the author’s arduous journey across Northern Ireland in a bid to uncover his grandfather’s long-buried Northern Irish roots.” - Maclean's

“He tells his story intelligently and kindly.” - The Leacock Foundation’s Award Committee

“The humour is subtle and usually self-deprecating…. For anyone who has never been to Northern Ireland and is planning to go, Beyond Belfast is a great primer to understanding the people, places and problems.” - Vancouver Sun

“Like with most other Will Ferguson books, don’t forget a box of tissues to wipe your tears of laughter.” - Campbell River Mirror

“Beyond Belfast by Will Ferguson… is, in this reader’s opinion, the best book Will Ferguson has penned to date. I shouted “Wow!” I gasped and I giggled and at least a dozen times I laughed out loud. I couldn’t put it down. The story held me from page to page as if I was right there slogging through the Irish bogs with the author… Ferguson’s insights are superb.” - Indian Head-Wolseley News

“Hilariously rewarding…. A choose-your-own-adventure book where the ‘choices’ were perhaps the worst ones, but certainly the most adventurous.” - See Magazine

“A sharp and witty picture of the land and its people.” - Niagara Magazine