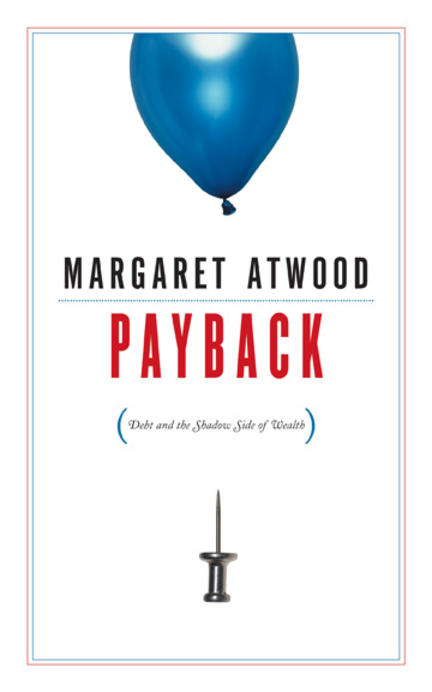 Legendary poet, novelist, and essayist Margaret Atwood gives us a surprising look at the topic of debt -- a timely subject during our current period of economic upheaval, caused by the collapse of a system of interlocking debts. Atwood proposes that debt is like air -- something we take for granted until things go wrong.

Payback is not a book about practical debt management or high finance, although it does touch upon these subjects. Rather, it is an investigation into the idea of debt as an ancient and central motif in religion, literature, and the structure of human societies. By investigating how debt has informed our thinking from preliterate times to the present day through the stories we tell each other, through our concepts of balance, revenge, and sin, and in the way we form our social relationships, Atwood shows that the idea of what we owe one another -- in other words, debt -- is built into the human imagination and is one of its most dynamic metaphors.

There has been much written about Atwood's 'prophetic vision' and her ability to be eerily 'prescient'...given Atwood's track record, I'm a believer...Either Atwood was born under a lucky star or she really should be moonlighting from a shady storefront with a sign that says 'Palm Readings: $25.'

...replete with anecdotes and opinions, witticisms and barbs...Payback is more about economic principles, and even the market crisis, than it appears at first glance. As impressive as Atwood's intuitions, or her intellect, or even her humour, is her insistence on tracing responsibilities, and possibilities, back to those human, and thus imaginative, constructions.

In Payback, Atwood freely mixes autobiography, literary criticism and anthropology in an examination of debt as a concept deeply rooted in human - and even, in some cases, animal - behaviour...Building an argument that abounds with literary examples...Atwood entertainingly and often wryly advances the familiar thesis that what goes around comes around.

"Ms. Atwood is a witty and astute writer of broad sympathy and wide-ranging curiosity, and the prose of the book, at once commonsensical and counterintuitive, bristles with insight and implication."

Payback is a delightfully engaging, smart, funny, clever, and terrifying analysis of the role debt plays in our culture, our consciousness, our economy, our ecology and, if Atwood is right, our future.

...[Payback is]...a demonstration of Atwood's ability to evoke in memorable detail our vanished cultural past, and to examine both past and present in the form of language. Writing in this mode, she's never off her game.

Nothing if not timely...Few writers are able to combine the esoteric with the polemic as [Atwood] does...darkly entertaining.

A celebrated novelist, poet, and critic, Atwood has combined rigorous analysis, wide-ranging erudition, and a beguilingly playful imagination to produce the most probing and thought-stirring commentary on the financial crisis to date.

Elegant and erudite...As one would expect from a novelist of Ms. Atwood's calibre, the phrasing is polished and the metaphors striking.

...witty, acutely argued and almost freakishly prescient...as amusing as it is unsettling.

The lectures remind us of why Atwood has been so important to our literature.

...a fascinating, freewheeling examination of ideas of debt, balance and revenge in history, society and literature - Atwood has again struck upon our most current anxieties.

...an extraordinarily vibrant Massey Lecture on debt, how it plays a motor force in much literature, in our own lives and in the machinations of the crowd we elect to govern us.

...these pieces offer a panoramic look at how the concept of debt acts as a fundamental human bond and - when obligations go unfulfilled, when ledgers are left unbalanced - how it can threaten to tear societies apart.

...[Payback is] elegant and erudite...As one would expect from a novelist of Ms Atwood's calibre, the phrasing is polished and the metaphors striking.

Payback is a stimulating, learned and stylish read from an eminent author writing from a heartfelt perspective.