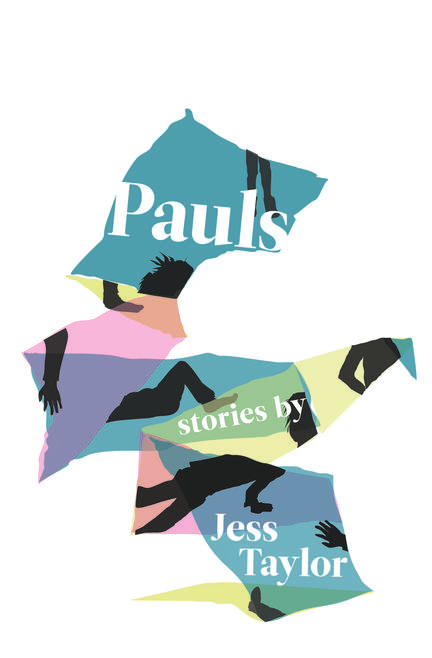 Paul, who is not always the same Paul, but could very well be a similar Paul, another Paul in a long line of Pauls. Paul runs through forests, drinks in student housing, flirts with girls, at times is a girl, loves men, makes friends, jumps from buildings, hurts people, gets hurt, climbs up towards the sky, waits for a sunrise, and all those human things.

Pauls, the debut short-story collection by the exciting young writer Jess Taylor, is about people: the things that remain unseen to them; how they cope with their unforgettable pasts; the different roles they take in each other's lives; how they hurt each other; how they try to heal each other; the things they want to learn; and the things they'll never discover. At the same time, Pauls is a portrayal of the world as these people see it -- they all exist in a universe that is strange and indifferent to those within it. Coincidences, relationships, conversations, and friendships all pose more questions than answers.

With a unique tone that balances humour, irony, and heavy themes, this series of interconnected stories has already garnered attention from awards' panels, with the title story winning Gold at the 2013 National Magazine Awards. Its contemporary tone and playful language offer an enjoyable read for people who like lively short fiction that focuses attention on themes of identity, relationships, and love.

"A magical and penetrating collection of strange, mundane, traumatized and ecstatic people who are all named Paul. Its simple sentences are little atoms of wonder." --Heather O'Neill, author of The Girl Who Was Saturday Night and Lullabies for Little Criminals

"Reading a Jess Taylor story is like planting a magic bean and watching, with a flashlight, as it grows overnight into something you've never seen before. But then you climb up the stalk of the story and look around and realize there is no magic at all, at least, nothing un-real. These are true stories, illuminated with the wisdom of Flannery O'Connor and the wild leaping logic of Hans Christian Andersen." --Michael Winter, author of Minister Without Portfolio and Into the Blizzard: Walking the Fields of the Newfoundland Dead

"I read Jess Taylor's debut with a kind of childlike enthusiasm. As a writer, she's thoughtful, compassionate, imaginative and intellectually curious. Her stories tend to establish themselves slowly, like a storm moving in, and they always revolve around a strong emotional centre that pulls you in, some sort of gravity. Don't resist." --Guillaume Morissette, author of New Tab

Jess Taylor is a writer and poet based in Toronto, Ontario. She is the host and founder of the Emerging Writers Reading Series and is the fiction editor of Little Brother Magazine. Her work has been published in a variety of journals, magazines, and newspapers, including Little Fiction, Little Brother, This Magazine, The National Post, Emerge Literary Journal, Great Lakes Review, Zouch Magazine, and offSIDE Zine. Her pamphlet chapbook, And Then Everyone, was released by Picture Window Press in the spring of 2014. In October 2014, Anstruther Press released her first full-length chapbook, Never Stop. Recently, she was named "one of the best alt-lit reads coming out of Canada" by Dazed and Confused Magazine. She also received the Gold 2013 National Magazine Award in Fiction for her short story, "Paul," which is the title story from her debut short story collection, Pauls (BookThug, 2015). Connect with Taylor at www.jesstaywriter.com, on Twitter @jesstaylorwriter, or on Tumblr (www.jesstaywriter.tumblr.com).

Other titles by Jess Taylor