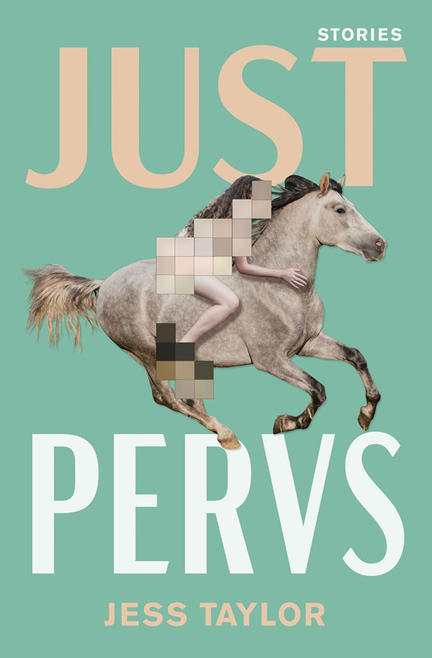 Two sex addicts meet and fall in love. A woman catches her husband cheating on her with their dog and escapes to her sister's horse farm. Four friends—fellow pervs—grow up and drift apart, pining for each other in silence until one of them is murdered.

In Jess Taylor's sophomore story collection, contemporary views of female sexuality are subverted, and women are given agency over their desires and bodies. Through these characters, sex is revealed to be many things at once: gross, shameful, exhilarating, hidden or open—and always complicated. Reminiscent of the works of Maggie Nelson, Mary Gaitskill and Chris Kraus, the stories in Just Pervs explore the strange oppression and illumination created by desire, the bewilderment of adolescence, and the barriers to intimacy both discovered within and imposed upon ourselves.

"It's an exciting thing to behold; one gets the sense of discovering in her authentic, compelling voice a master-in-waiting, like a young Alice Munro." —National Post

"Taylor exhibits remarkable insights into matters of the fickle heart." —Toronto Star
"Taylor is adept at capturing the anxiety-ridden tenor of the current zeitgeist." —The Globe and Mail

Jess Taylor is a writer and poet based in Toronto, Ontario. She is the host and founder of the Emerging Writers Reading Series and is the fiction editor of Little Brother Magazine. Her work has been published in a variety of journals, magazines, and newspapers, including Little Fiction, Little Brother, This Magazine, The National Post, Emerge Literary Journal, Great Lakes Review, Zouch Magazine, and offSIDE Zine. Her pamphlet chapbook, And Then Everyone, was released by Picture Window Press in the spring of 2014. In October 2014, Anstruther Press released her first full-length chapbook, Never Stop. Recently, she was named "one of the best alt-lit reads coming out of Canada" by Dazed and Confused Magazine. She also received the Gold 2013 National Magazine Award in Fiction for her short story, "Paul," which is the title story from her debut short story collection, Pauls (BookThug, 2015). Connect with Taylor at www.jesstaywriter.com, on Twitter @jesstaylorwriter, or on Tumblr (www.jesstaywriter.tumblr.com).

Other titles by Jess Taylor

The Edges of Identity

8 books dealing with issues of identity, sexuality, and mental health.