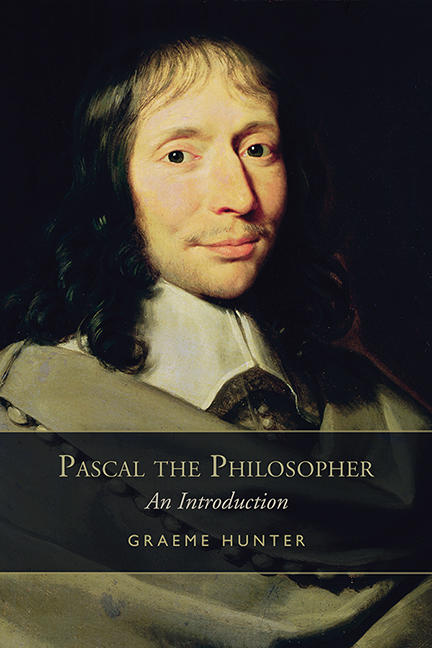 Blaise Pascal has always been appreciated as a literary giant and a religious guide, but has received only grudging recognition as a philosopher: philosophers have mistaken Pascal’s harsh criticism of their discipline as a rejection of it.  But according to Graeme Hunter, Pascal’s critics have simply failed to grasp his lean, but powerful conception of philosophy. This accessibly written book provides the first introduction to Pascal’s philosophy as an organic whole.

Hunter argues that Pascal’s aim is not merely to humble philosophy, but to save it from a kind of failure to which it is prone. He lays out Pascal’s development of a more promising and fruitful path for philosophical inquiry, one that responded to the scientific, religious, and political upheaval of his time. Finally, Hunter illuminates Pascal’s significance for contemporary readers, allowing him to emerge as the rare philosopher who is spiritual, literary, and rigorous all at once – both a brilliant controversialist and a thinker of substance.

Graeme Hunter is a professor in the Department of Philosophy at the University of Ottawa.

‘Hunter’s lucid and humane book is a fine production… It pays Pascal the deep compliment of taking his ideas to be worthy of the most impartial and candid scrutiny, and it can well repay the engagement of readers who peruse it in the same spirit.’

“Hunter brings considerable breadth and depth of learning to this study. By doing so, he gives Pascal the general respect he deserves.”

“An engaging portrait of Blaise Pascal as a philosopher ... The discussion is lucid, informative, and informed by relevant literature. This reviewer knows of no better philosophical introduction to Pascal in English ... Highly recommended.”

‘This is a wonderful book.’

‘Excellent and highly readable book…Hunter’s aim is not just to show how Pascal resorted to philosophical argument but to explain Pascal’s ‘mission’ to develop ‘a far reaching account of philosophical failure’.’

British Journal for the History of Philosophy, vol22:01:2014

Other titles by Graeme Hunter