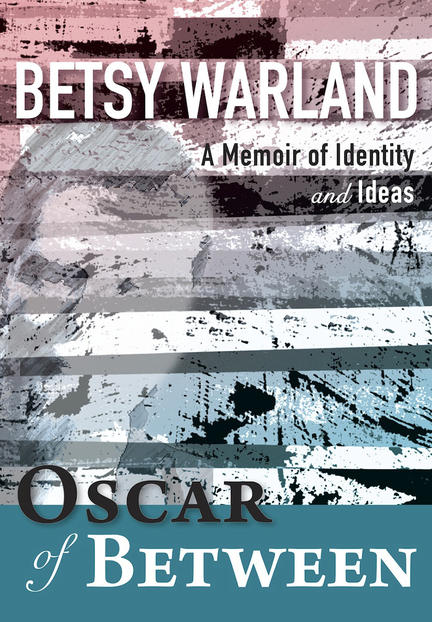 In 2007, at the age of sixty, Betsy Warland finds herself single and without a sense of family. On an impulse, she decides to travel to London to celebrate her birthday, where she experiences an odd compulsion to see an exhibit on the invention of military camouflage. Within the first five minutes of her visit, her lifelong feeling of being aberrant reveals its source: she had never learned the art of camouflage.

This marked the beginning of Oscar of Between: A Memoir of Identity and Ideas. Taking the name Oscar, she embarks on an intimate, nine-year quest by telling her story as “a person of between.” As Oscar, she is able to make sense of her self and the culture that shaped her. She traces this experience of in-betweenness from her childhood in the rural Midwest, through to her first queer kiss in 1978, divorce, coming out, writing life. In 1984, she and her lover wrote lesbian erotic love poetry collections in dialogue with one another, the first and only tandem collections on this subject in English Canada. After the two split, she experienced years of unacknowledged exclusion from a community in which she thought she belonged.

In the process of writing Oscar’s story, Warland considers our culture’s rigid, even violent demarcations as she becomes at ease with never knowing what gender she will be addressed as: “In Oscar’s daily life, when encountering someone, it goes like this: some address her as a male; some address her as a female; some begin with one and then switch (sometimes apologetically) to the other; some identify Oscar as lesbian and their faces harden, or open into a momentary glance of arousal; some know they don’t know and openly scrutinize; some decide female but stare perplexedly at her now-sans-breast chest; some are bemused by or drawn to or relate to her androgyny; and for some none of this matters.”

A contemporary Orlando, Oscar of Between extends beyond the author’s personal narrative, pushing the boundaries of form, and by doing so, invents new ways to see ourselves.

Betsy Warland has published 13 books of poetry, creative nonfiction, and lyric prose. Warland’s 2010 book of essays on new approaches to writing, Breathing the Page—Reading the Act of Writing became a bestseller. Author, mentor, teacher, manuscript consultant, editor, Warland received the City of Vancouver Mayor’s Award for Literary Excellence in 2016. Warland is the director of Vancouver Manuscript Intensive, co-founder of the national Creative Writing Nonfiction Collective, and established The Writer’s Studio at Simon Fraser University where per was director of the program from 2001–2012, a TWS Mentor in 2001–2003, 2005, and remains on TWS teaching faculty.In March of 2016, Warland’s Oscar of Between—A Memoir of Identity and Ideas launched Caitlin Press’ new imprint, Dagger Editions. The book evolved from pers new publishing template: an interactive online salon that features excerpts from per manuscript Oscar of Between, guest writers, artist’s work, and lively comments from readers. Oscar of Between was the basis for Lloyd Burritt’s chamber opera, The Art of Camouflage in 2018, which will be performed in the Indie Opera West festival (Vancouver) in 2020. Lost Lagoon/lost in thought is Warland’s most recent book, published in Winter 2020.

“To be sure, Oscar of Between traces a particular path through current questions around trans and genderqueer identities. It is crucial to point out how violently policed are those who live between in this respect … Between, for Warland, is not simply a refusal of binary genders; it is a larger, primary, embodied consideration of the ways in which classifications and taxonomies are, quite literally and destructively, our modern “predicament” (the Latin praedicamentum is a rendering of the Greek kategoria).”

“Warland covers vast ground, moving swiftly and in a nonlinear fashion from intimate reflections on her most personal relationships, living arrangements, and perspectives on creativity, to matters of broader social and political consequence. A book perhaps without obvious category but not without an important place in Canadian literature, Oscar of Between is a dynamic work of startling insight.”

“On its own merits, Oscar of Between is an achievement. It reminds readers of the vitality of Warland’s creative vision. Rigorously inquisitive, always probing the boundaries of language and identity, and centrally concerned with questions of beauty and transcendence in all forms, Oscar of Between straddles multiple poetry traditions and challenges the boundaries of poetry and prose. In the best of all worlds, Oscar of Between will bring Warland to greater attention in Canada and the United States, returning her work to the vital public conversations about poetry happening today”

“Regardless of her affinity for evoking specificity in certain moments, Warland is not concerned with telling her/Oscar’s story in any kind of linear way. Instead, she lays out impressions and memories, often grouped by time and place, and leaves it to the reader to order them together. Her achievement is that she distills experiences down to their most essential pieces, and communicates in a paragraph what it might take another writer a chapter to describe.”

Other titles by Betsy Warland

Tracing the Untelling of Motherloss

Reading the Act of Writing