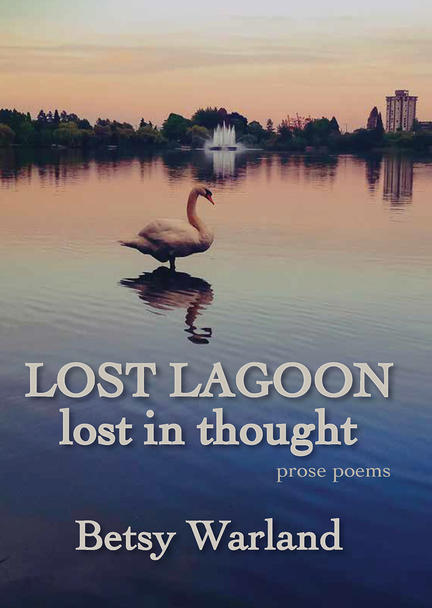 In trademark lyric prose, accompanied by the images depicting the sights and sounds of nature, Warland’s roving observations in and around Vancouver’s Lost Lagoon offer insights into nature, narratives, and the urban environment.

After moving to Vancouver’s West End in 2014, The Human is drawn to a small body of water called Lost Lagoon in Stanley Park. Daytime visits, with a surprising array of wildlife, are quietly revelatory; but so is suddenly waking in the night when owl hoots, or geese startle in alarm at otter on the prowl. The Human savours this up-close relationship between wildlife and fast-paced urban living, questioning the interface between the urban and natural world.

Upon learning the lagoon was named by nineteenth century Canadian author E. Pauline Johnson, of Mohawk and English origin, Johnson then becomes a presence in the narrative. Pauline Johnson wrote evocatively about it: “Among the wild rice in the still lagoon/In monotone the lizard shrills his tune.”

During five years of intimate counterpoint between urban living and wildlife, The Human’s notions are challenged and altered. Questions of how significant the specificity of place is to story, how our relationship to nature is altered by urban living, and how we might return to the natural world. Reminiscent of Henry Thoreau’s Walden Pond, perceptions about nurturing, fear, inventiveness, delight, death, protection, humour, even tenderness change as the lagoon has exposed what being human in the twenty-first century actually means.

Betsy Warland has published 13 books of poetry, creative nonfiction, and lyric prose. Warland’s 2010 book of essays on new approaches to writing, Breathing the Page—Reading the Act of Writing became a bestseller. Author, mentor, teacher, manuscript consultant, editor, Warland received the City of Vancouver Mayor’s Award for Literary Excellence in 2016. Warland is the director of Vancouver Manuscript Intensive, co-founder of the national Creative Writing Nonfiction Collective, and established The Writer’s Studio at Simon Fraser University where per was director of the program from 2001–2012, a TWS Mentor in 2001–2003, 2005, and remains on TWS teaching faculty.In March of 2016, Warland’s Oscar of Between—A Memoir of Identity and Ideas launched Caitlin Press’ new imprint, Dagger Editions. The book evolved from pers new publishing template: an interactive online salon that features excerpts from per manuscript Oscar of Between, guest writers, artist’s work, and lively comments from readers. Oscar of Between was the basis for Lloyd Burritt’s chamber opera, The Art of Camouflage in 2018, which will be performed in the Indie Opera West festival (Vancouver) in 2020. Lost Lagoon/lost in thought is Warland’s most recent book, published in Winter 2020.

“Lost Lagoon represents Warland’s magisterial (and yet, paradoxically, minimalist) distillation of a half decade living nearby… Liminality is Warland’s great subject, and it resonates through her observations of life and death on the lagoon, and in her character sketches…”

Other titles by Betsy Warland

Tracing the Untelling of Motherloss

A Memoir of Identity and Ideas

Reading the Act of Writing