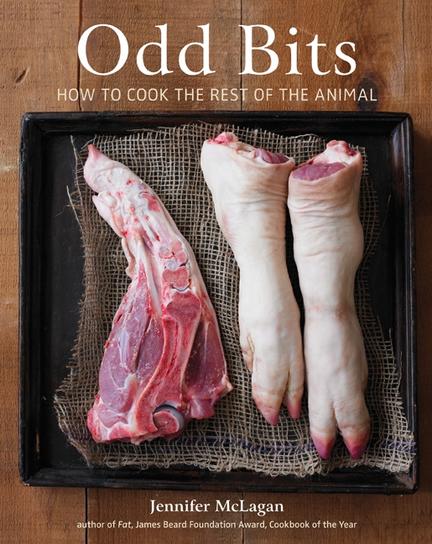 Food & Wine Magazine has declared cooking odd bits the must-try trend for 2011. What are the “odd bits”? They are cuts of meat that North Americans used to know very well indeed: cheaper, tougher, longer cooking, utterly delicious things like shank, cheek, brisket, chuck, kidney and ribs. When the prime cuts, such as tenderloins, breasts and chops, became more available and more affordable, we forgot all about the wonders of the odd bits. Jennifer McLagan is bringing it all back to us with this wonderfully inventive, informative, humorous and beautiful cookbook. Cooking the odd bits is no more stressful or involved than cooking a good steak, and it’s also quite a lot more fun. Other cuisines have long valued the odd bits, and recipes from Europe to the Middle East to Africa and Asia are featured, along with your favourite liver and bacon.

Rediscover your taste for “the rest of the animal” with Odd Bits, and you will soon be cooking with confidence and economy in your own kitchen.

JENNIFER McLAGAN has over thirty years of experience in the food business as a chef, caterer, food stylist, recipe writer and cookbook author. The style and content of her books is distinctive. She writes more than just recipe books. As well as providing delicious recipes, she informs, entertains and educates the reader with history, culture and lore of the subject. She tackles subjects outside the mainstream that fascinate not only cooks, but anyone interested in the place of food in our culture.

Her books Bones (2005) and Fat (2008) were widely acclaimed and won James Beard and IACP awards. Fat was the James Beard Foundation Cookbook of the Year. Odd Bits (2011) was one of the New York Times Notable Cookbooks of 2011 and is an IACP and James Beard nominee.

McLagan is a regular presenter at the Epicurean Classic in Traverse City, Michigan, and has also presented at the highly prestigious Melbourne Food and Wine Festival and Food & Wine Classic in Aspen. Fat was featured on the CBS Sunday Morning program.

Other titles by Jennifer McLagan