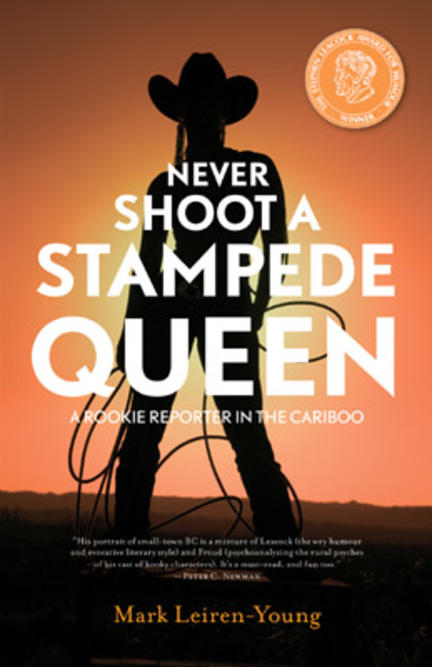 Winner of the 2009 Stephen Leacock Medal for Humour

The cops wanted to shoot me, my bosses thought I was a Bolshevik, and a local lawyer warned me that some people I was writing about might try to test the strength of my skull with a steel pipe. What more could any young reporter hope for from his first real job?

The night Mark Leiren-Young drove into Williams Lake, British Columbia, in 1985 to work as a reporter for the venerable Williams Lake Tribune, he arrived on the scene of an armed robbery. And that was before things got weird. For a 22-year-old from Vancouver, a stint in the legendary Cariboo town was a trip to another world and another era. From the explosive opening, where Mark finds himself in a courtroom just a few feet away from a defendant with a bomb strapped to his chest, to the case of a plane that crashed without its pilot on board, Never Shoot a Stampede Queen is an unforgettable comic memoir of a city boy learning about—and learning to love—life in a cowboy town.

Mark Leiren-Young is a popular Canadian performer, playwright and journalist. His plays have been produced throughout Canada and his award-winning drama, the romantic fantasy Blueprints from Space received a staged reading at New York's Open Eye Theatre. Mark's first radio drama, Dim Sum Diaries, received international attention when it debuted on CBC's Morningside in 1991. Mark's humorous commentaries have appeared in such publications as The Hollywood Reporter, The Toronto Star, The Vancouver Sun, and The Georgia Straight. His writing has also appeared in The Utne Reader, TV Guide, This Magazine, The Globe and Mail, and the South China Morning Post. Leirin-Young has two plays published by Anvil Press: Shylock and Articles of Faith.

“Williams Lake comes across as the Wild West mixed with Capone-era Chicago with a soupcon of Jim Crow Deep South segregation and an unsavory dash of perversion. And that’s just in the first chapter. —Tom Hawthorn, the Globe and Mail

Loved it! . . . I salute you, sir. Thanks for a great read. —Zachary Petit, Managing Editor, Writer's Digest

Never Shoot a Stampede Queen: A Rookie Reporter in the Cariboo

This collection of stories is taken from the real news stories the author himself covered in his brief but adventurous stay as a rookie reporter in William’s Lake, BC. He had no idea what he was getting himself into either socially or job wise. News topics incorporated into the story include murders, homelessness, discrimination, car crashes, a train derailment and child abuse cases.

This book won the 2009 Stephen Leacock Medal for Humour. Leiren-Young is a screenwriter, playwright, performer, journalist and filmmaker.

Other titles by Mark Leiren-Young

Orcas of the Salish Sea Read-Along

Orcas of the Salish Sea

The Mystery and History of Killer Whales

The Killer Whale Who Changed the World

Nothing is Ever Clear Cut

BC Books From the Cariboo