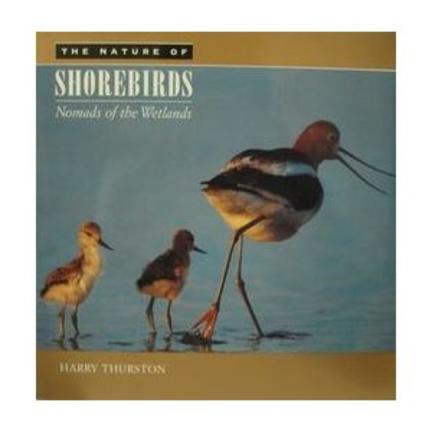 Shorebirds are known for their swift flight, their piercing cries and their extravagantly long legs and bills. They are also known for their spectacular migrations, which may take them from the Canadian High Arctic to the tip of South America, spanning 25 000 kilometres or more on their round trip. Magnificently illustrated with some of the best photographs of shorebirds in the world, The Nature of Shorebirds illuminates the mystery of this migration, along with many other aspects of North American shorebirds' lives.

Award-winning author Harry Thurston examines the dazzling diversity of shorebirds, looks at the birds' obsessive feeding behaviour, necessitated by their long migrations and the need to accumulate reserves of fat, and describes the sometimes-bizarre mating behaviour of various species. He also describes the epic migrations of shorebirds as they travel south for the winter and then back north to breed and take advantage of the abundance of food produced by long hours of sunlight. Finally, Thurston examines the threats to shorebird habitat from agriculture, urban development, power projects, pollution and recreation and describes the efforts to conserve these critical wetlands throughout the world.

Harry Thurston's elegant, authoritative text is accompanied by stunning photographs of the many species of shorebirds as they probe in the mud for their dinner, flock across the skies or stand silhouetted against a sunset. The book also includes photographs of the birds' natural habitat and of the other animals that share this habitat. Together, text and photographs provide a tantalizing look at the world of the restless, roving shorebirds.

Harry Thurston is the author of several collections of poetry and twelve nonfiction books, including Tidal Life: A Natural History of the Bay of Fundy, winner of three non-fiction prizes in the Atlantic region; The Nature of Shorebirds: Nomads of the Wetlands; and A Place between the Tides: A Naturalist's Reflections on the Salt Marsh, which received the 2005 Sigrid Olson Nature Writing Award in the United States and was shortlisted for the 2005 BC Award for Canadian Non-Fiction. He has also written for such magazines as Audubon, Canadian Geographic, and National Geographic. Thurston lives in Nova Scotia.

Other titles by Harry Thurston

The Waters of Remembrance, A Memoir

Keeping Watch at the End of the World

Animals of My Own Kind

An Homage to the Salmon Rivers of Atlantic Canada

Thirty-five Days in the Desert