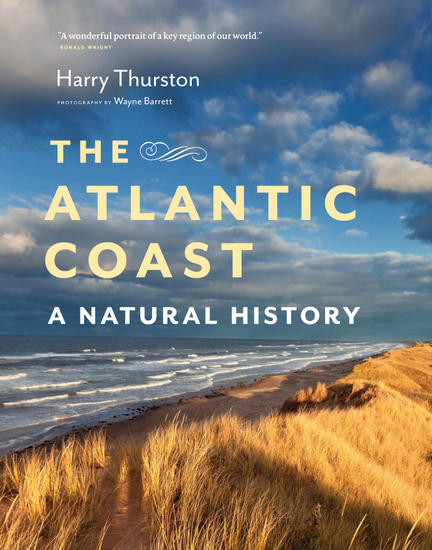 Winner of the Lane Anderson Award for Best Science Writing

An authoritative and fascinating exploration of the natural history of the east coast of North America.

The North Atlantic coast of North America -- commonly known as the Atlantic Coast -- extends from Newfoundland and Labrador through the Maritime Provinces and the Northeastern United States south to Cape Hatteras. This North Atlantic region belongs to the sea. The maritime influence on climate, flora, and fauna is dominant -- even far inland. This is where the great northern boreal forests intermingle with the mixed coniferous-hardwood forests farther south and where the cold, iceberg-studded Labrador Current from the Arctic and the warm Gulf Stream of the tropics vie for supremacy.

Filled with stunning photographs, the book includes chapters on the geological origins of this region, the two major forest realms, and the main freshwater and marine ecosystems and also describes the flora and fauna within each of these habitats. Finally, it looks at what has been lost but also what remains of the natural heritage of the region and how that might be conserved in future.

Written by the Atlantic regionís best-known nature writer, Harry Thurston, The Atlantic Coast draws upon the most up-to-date science on the ecology of the region as well as the authorís lifetime experience as a biologist and naturalist. It is both a personal tribute and an accessible, comprehensive guide to an intriguing ecosystem.

Harry Thurston is the author of several collections of poetry and twelve nonfiction books, including Tidal Life: A Natural History of the Bay of Fundy, winner of three non-fiction prizes in the Atlantic region; The Nature of Shorebirds: Nomads of the Wetlands; and A Place between the Tides: A Naturalist's Reflections on the Salt Marsh, which received the 2005 Sigrid Olson Nature Writing Award in the United States and was shortlisted for the 2005 BC Award for Canadian Non-Fiction. He has also written for such magazines as Audubon, Canadian Geographic, and National Geographic. Thurston lives in Nova Scotia.

Wayne Barrett is a partner in Barrett & MacKay Photography. His photographs have been featured in advertisements, magazines, and calendars and have appeared in numerous books. He lives in Prince Edward Island.

Other titles by Harry Thurston

The Waters of Remembrance, A Memoir

Keeping Watch at the End of the World

Animals of My Own Kind

An Homage to the Salmon Rivers of Atlantic Canada

Thirty-five Days in the Desert

Other titles by Wayne Barrett

Images of the Island

Memories of the Old Home Place